It’s already been established that the mainland categorically does festivals better. They’re usually in stunning locations, are organised expertly and aren’t full of school-leavers getting drunk and passing out in their tent before 6pm. That’s not to say that Latvia’s biggest festival, Positivus, is devoid of festival clichss – flower crowns still reign supreme. Situated on the coast in Salacgriva, a two hour drive from the country’s capital Riga – the festival site is a forest/beach combo, perfect if you want to swim in the stunning Baltic Sea in between bands. Safe to say it’s definitely not a festival for those prone to meticulously checking their Clashfinder print-out since it’s virtually clashless. Instead, people come from all over Eastern Europe to have a great time and discover some new music as well as catch some of their favourites.

Positivus is very much about creating a feeling; a lot of the acts display a raw emotion that has a nostalgic resonance with its crowd. Getting to the festival site on Friday evening, it’s straight to the Red Bull stage where Polish duo Rebeka are projecting their primal energy onto the crowd, making hyper-energetic electronic pop in the same vein as Austra with rich vocals from Iwona Skwarek. She makes haunting choral noises by bashing furiously at an MPC like it’s her worst enemy as her counterpart Bartosz Szczesny adjusts the dials on his Moog with brute force. After a brief walk around the site, it’s time for Laura Mvula’s pre-sunset slot. There’s no doubt that Mvula’s technical vocal skill and slick, velvet tone are enviable and her majestic stage presence complements it, commanding the audience’s attention fully whilst barely lifting a limb. The performance is surprisingly intimate and crystal clear - her voice is destined for big concert halls but she’s equally adept in a festival setting.

The intimacy grows even stronger as Baltimore’s Future Islands grace the stage as a fitting end to the night, undoubtedly the most anticipated performance of the whole weekend. As the festival programme states, they don’t “really require much advertising”. Unsurprisingly, their raw sexual energy wins the crowd over almost instantly as Samuel T Herring ducks, dives and grinds on the stage – alternating between his ferocious chest-thumping and signature dance moves. Announcing that they’ve already done 100 shows this year, the tour fatigue seems to be setting in, but instead of taking a break they’re looking forward to the next hundred. Filing through the archive of his memories, Herring shares a childhood story, beaming “When I was 7 years old I filed a book report on Latvia.” Towards the end of their set they play ‘Fall From Grace’ introducing it as a song “about someone you can’t ever say goodbye to” before lighting up a cigarette on stage. “I heard Lana Del Rey does this so I’m trying it” he comments.

Unsurprisingly the now famous Letterman-appearing single that propelled them to worldwide festival stardom, ‘Seasons’, causes the crowd to erupt into joyous shouting and marvel at the intensity they bring performance after performance. They even come on for an encore, a rarity at a festival, but they deserve it and even after they’ve well and truly left the stage the crowd are left thinking about how much impact they’ve made in such a short time. At this point, no one’s ready to call it a night just yet so NYC producer Nick Hook (producer credits on Azealia Banks’ ‘Jumanji’/the Young Thug, A$AP Ferg & Freddie Gibbs’ featuring ‘Old English’) is over at Red Bull for a caffeinated DJ set, playing a remix of Danny Brown’s ‘Smokin & Drinkin’, Rustie’s ‘Raptor’ and Boddika & Joy Orbison’s ‘&Fate’ amongst others and drawing in a crowd that makes it seem like a deleted scene from Spring Breakers.

The next morning, after walking around Riga with its buildings looking like abandoned Wes Anderson locations , it’s time to delve back into the countryside for Daughter, who provide an apt mellow Saturday afternoon set that’s goose-pimple inducing, with Elena Tonra remaining a seemingly shy but decidedly powerful force, particularly belting singles ‘Home’ and ‘Youth’ with conviction – counteracting the trio’s brooding stage presence. Having a break from the outdoor stages, Estonians Junk Riot play an extremely Foals-indebted set in a small tent decorated with old-fashioned lamp shades. It’s then time for the biggest draw of the whole festival, Ellie Goulding. With a crowd spilling out over the edges of the forest, Goulding starts off shakily with some newer material. She looks unsure and plays with dead-eyed emotion, reflecting on the crowd, who are largely unmoved for the first half of her set. Nonchalantly wearing a bindi on stage doesn’t do her any favours either.

However, in the second half she steps up and shows Salacgriva why she deserves to be here. Goulding cruises effortlessly through pitch-perfect vocal licks, treating the crowd to a couple of covers. First up is a tender rendition of Massive Attack’s ‘Teardrops’ which she follows up with her cover of James Blake’s ‘Life Round Here’, sans Angel Haze. Casual observers just riding the set out waiting for krautrock pioneers Kraftwerk seem to have been won over by the time she finishes with ‘Anything Could Happen’ and ‘Burn’ – you can still hear people singing the ‘Burn’ chorus well into the night around the forest site. The time has come now for Positivus’ attendees to sport their 3D glasses and get into the Kraftwerk mindset. Reunion shows are oversaturated and often embarrassingly disappointing at this point but Kraftwerk reside in the middle, their live show isn’t a triumphant masterpiece but it's not snooze-inducing either. 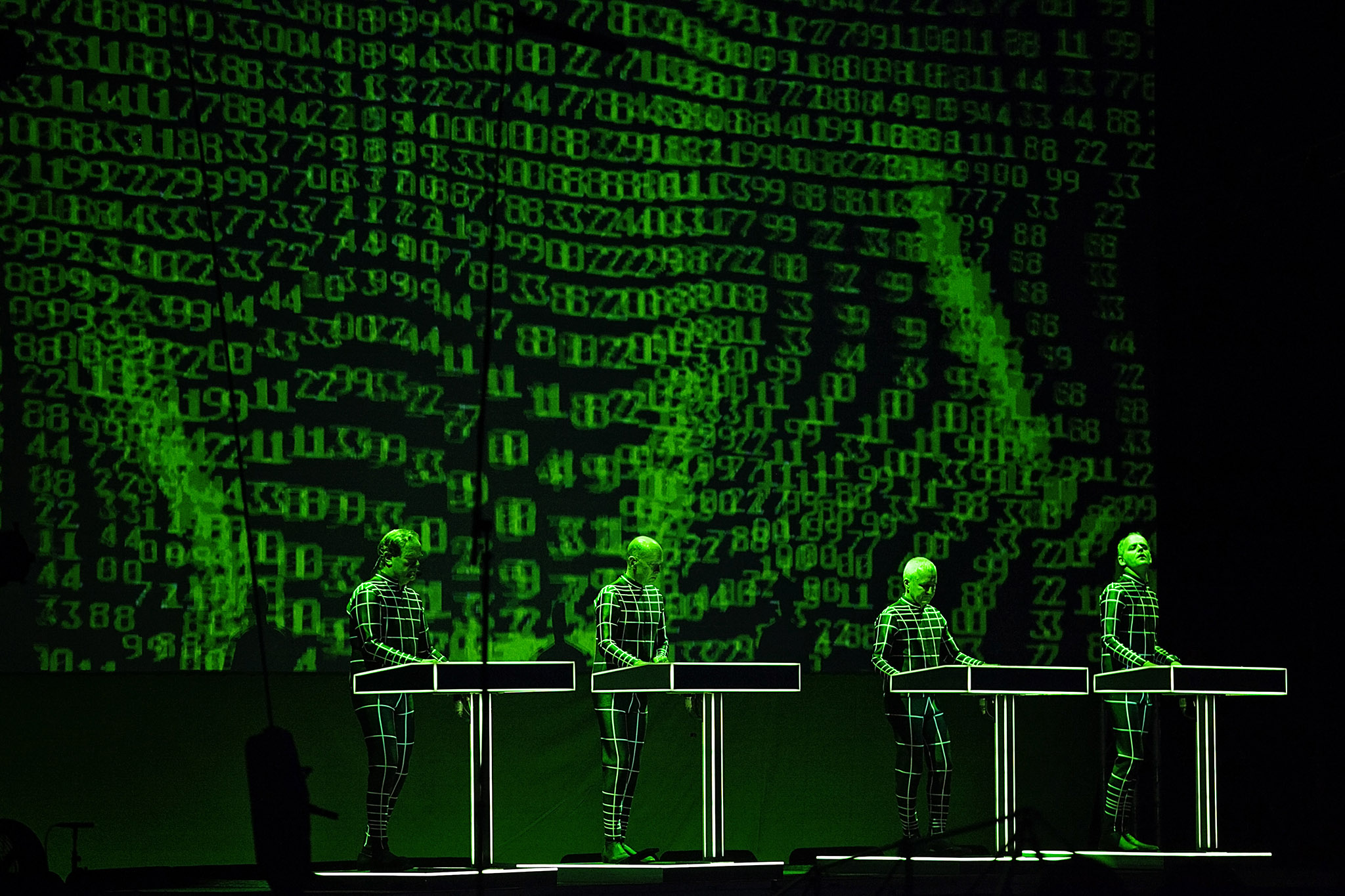 The four German producers are positioned on the stage in a formation that makes them look like they’re about to host an afternoon talk show - stood unnervingly still, like unopened model figurines of themselves. It’s the visuals that unsurprisingly steal their set, as much as ‘The Robots’ and ‘Autobahn’ and ‘The Model’ get rapturous praise. A glitchtastic display of technicolour TV error signals, computers that look like historical artefacts and a hypnotic loop of the Earth moving very slowly as a satellite orbits it lock in the gaze of the audience. Kraftwerk are one of those impressive “I was there” moment artists and this is definitely a performance that reflects that.

Back in Riga away from the festival site on Sunday morning, it’s time for a break from getting sand stuck in every crevice. Wandering around back streets, checking out important-looking buildings and looking at plastered-on billboards for upcoming concerts, Positivus offers the best experience music-wise near the country’s capital which is why its attendees make such an experience of it and why people venture from Estonia and Lithuania to drink shots and enjoy the music. It’s the last day on site by Salacgriva beach and despite it having rained heavily during the day, everyone is having mud wrestling matches by slamming each other into the murky pond formed by the main stage instead of hiding inside the cinema tent. One of those getting involved in the mud dancing is the bratty child of Scandi pop, MØ. Her silky, piercing vocals are offset by an odd but entirely engaging stage presence, clunking her limbs around in staccato motions. Feeling every beat of the music in her body, she stomps in time to drum kicks and overexaggerates air guitar over bass riffs. “HEY YO!”, she shouts repeatedly, like a Jesse Pinkman impersonator. 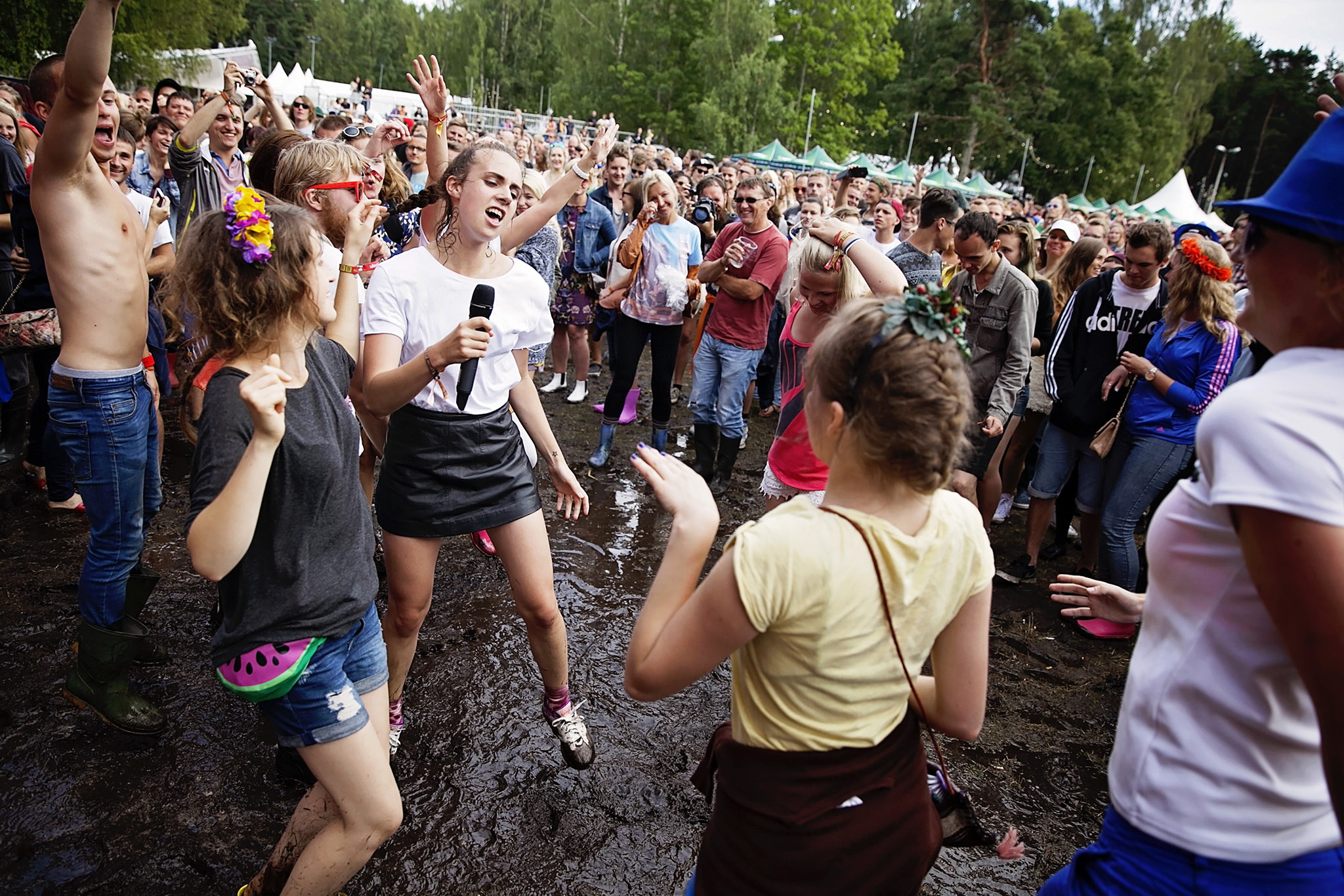 ‘Maiden’ is a particular highlight and during the set, she repeatedly runs into the crowd to dance in the muddy pool with the crowd – jumping back on stage with mud dripping all over her body but she doesn’t even stop for a second to try and wipe it off. “This last song’s about being afraid to die!” she announces, something that seems to concern her as she performs as if her life depends on it until the last second. Next up on the main stage is AlunaGeorge - however, the latter is missing. Aluna puts on a great performance regardless, bounding around the stage in a set so bass-y that the temporary rain shower emerging during the breakdown of ‘Your Drums, Your Love’ felt like it was caused by it.

Moving into stranger realms, Of Montreal play to a surprisingly empty crowd as trademark yelps and screeches emanate from Kevin Barnes, providing a particularly impassioned version of ‘Gronlandic Edit’, hitting notes that make your throat hurt just thinking about them.

Subduing the current atmosphere, Chet Faker invites Salacgriva in with his soulful, forlorn vocal tone and labouring lovingly over the mixer in front of it. It’s undeniably hard to not see the similarities between himself and James Blake – they both rose to prominence through cover versions and share the same soul/electronic balance. The warm analogue synth stabs and vocal samples draw the crowd in until the apex of his set, the ‘No Diggity’ cover. It may have been covered enough times to warrant Blackstreet getting a covering restraining order but it still sounds just as great. The night and the festival are almost coming to an end but there’s time for Temples. An anti-climactic end to the festival, the psychedelic Brits may have the look of a seminal glam rock band but their stage presence is as stiff as Dan Bastille’s quiff. Frontman Bagshaw drawls languidly over the microphone, hiding his face in a dense mop of curls as his bandmates seem equally bored. Even ‘Keep in the Dark’ fails to make the impact that it has the right to live.

Having spent 3 days in the Latvian countryside, everyone seems surprisingly refreshed and already talking about next year’s event. As the clock strikes 12, fireworks erupt into the sky above the main stage – signalling that it’s time to pack up and migrate back to Riga. A festival more about atmosphere and feeling rather than the music works in the right setting and it’s not hard to see why people come from all over to Salacgriva to enjoy the seemingly never-ending sun, beautiful sunsets by the Baltic Sea and a lounge in a hammock in the forest amongst admiring Kraftwerk. 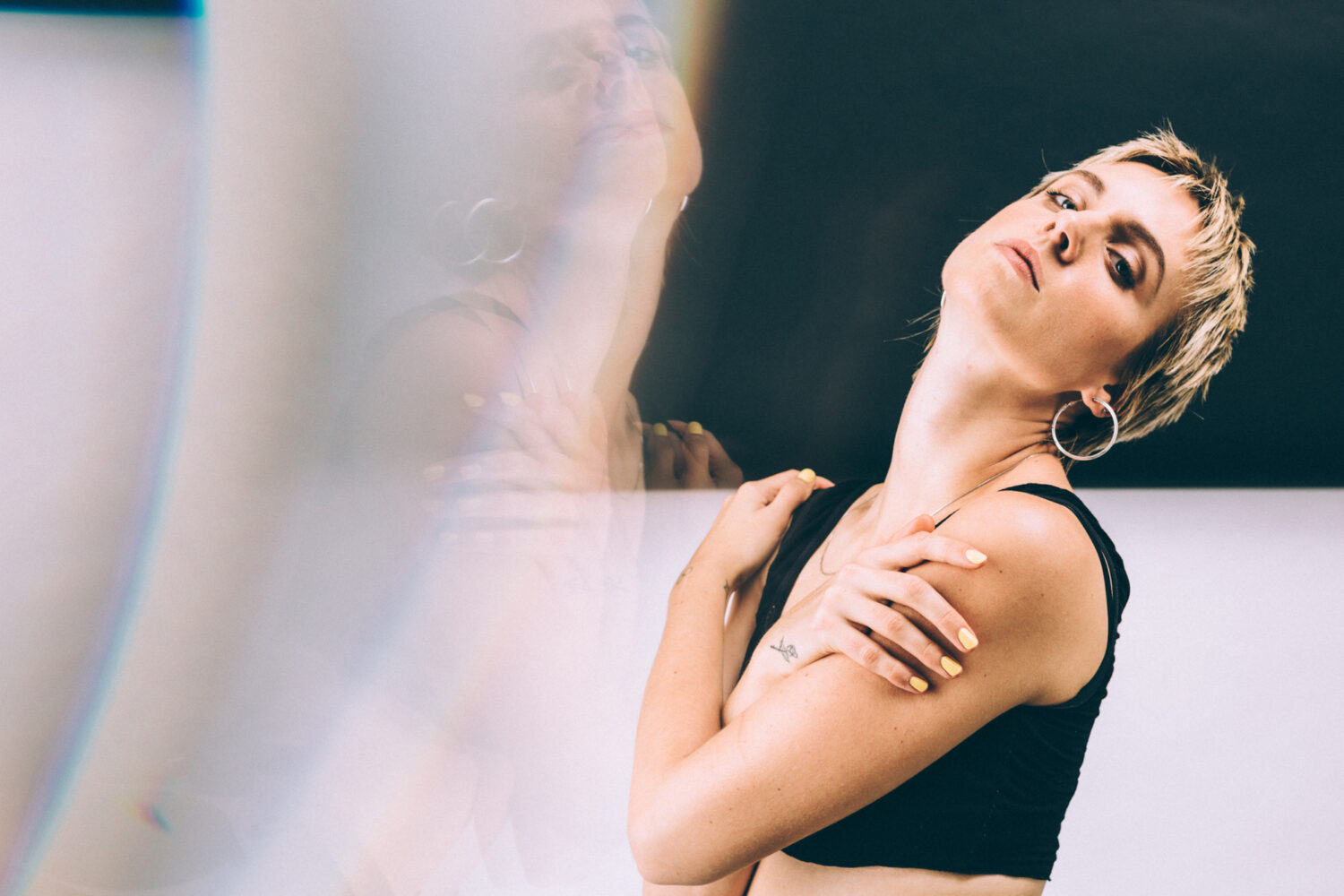 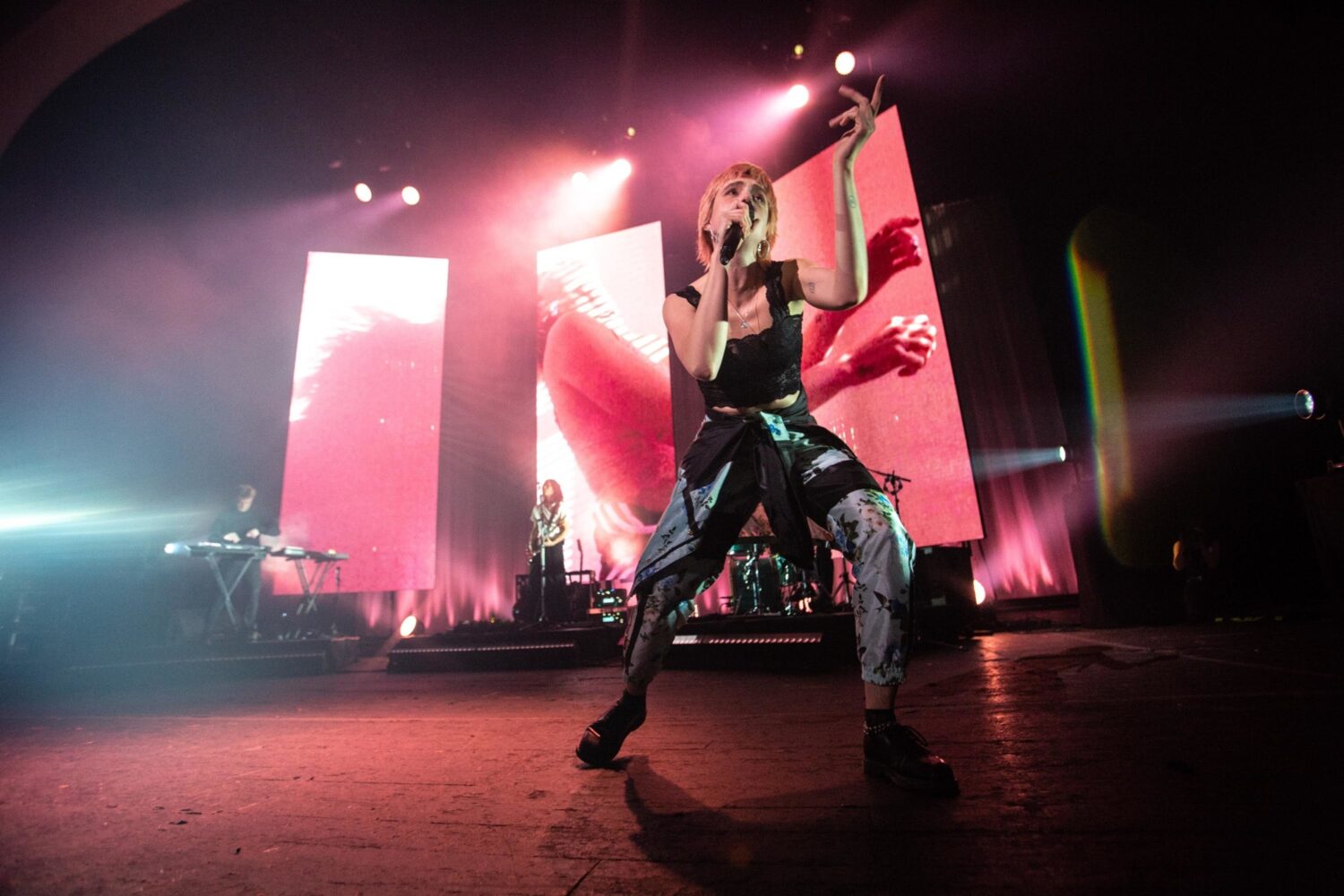 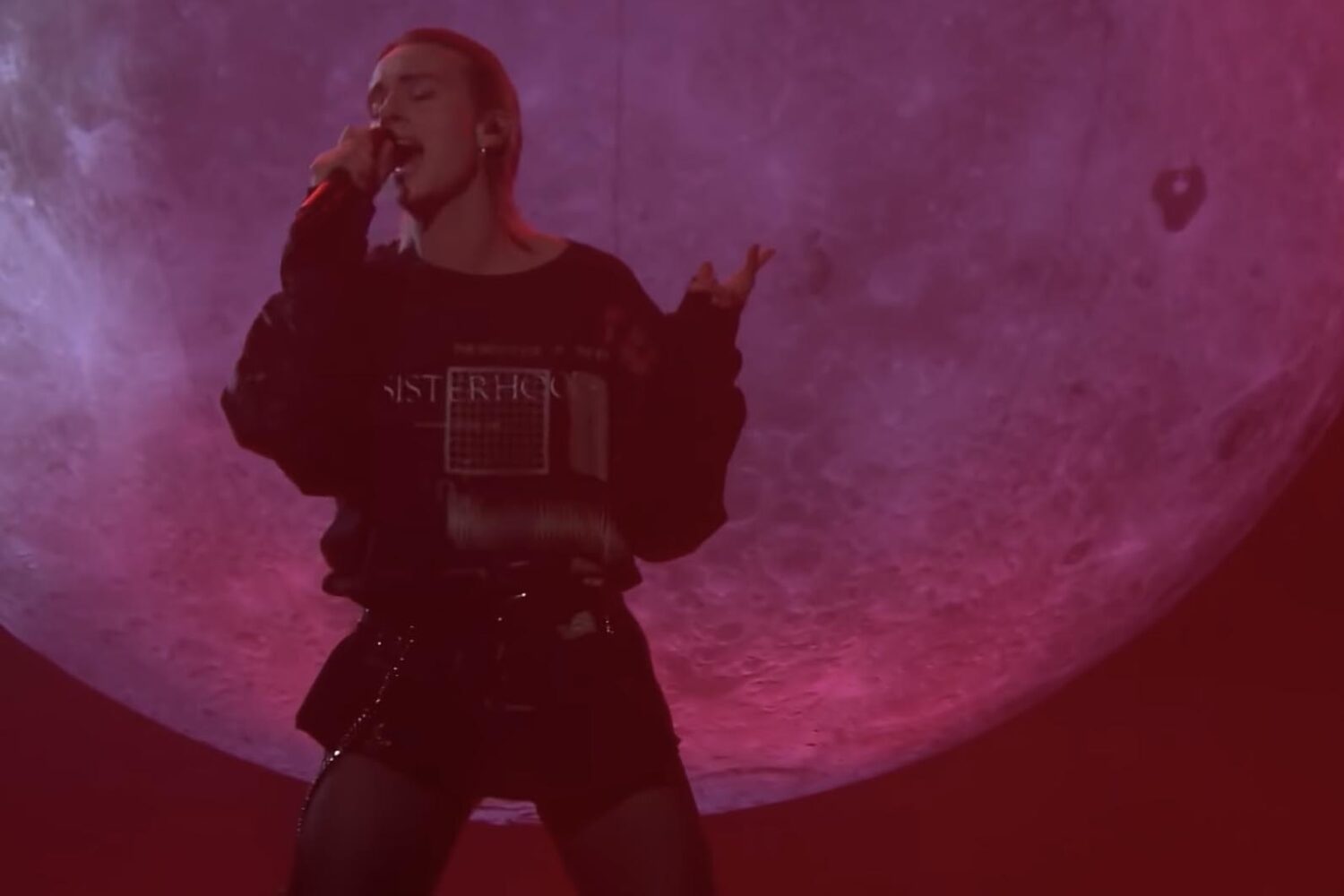