Tis the night before Christmas, and knowing how these things go, you’ve probably reached musical saturation point. There’s only so many times that even the most sturdy lugholes can withstand Noddy Holder screeching “it’s Chrrrrrriiisstmas” at the top of his smug little lungs, and after hearing Shakin’ Stevens playing in every single shop in town, it’s enough to make anybody go a bit bah humbug.

But, Ho Ho Ho, dear readers, never fear. The DIY writers have been busy - like little elves in Santa’s workshop - gathering up the best Christmas songs on the block. There are some rather bizarre takes on traditional carols below, along with a good old glug of melencholy. Oh, and then there’s Wham! Because, lets be completely honest with ourselves here for one second. ‘Last Christmas’ is among the best songs ever written in the history of music, let alone for Christmas. It wouldn’t be Christmas without George Michael and Andrew Ridgeley, would it?

So, without further ado, hit play with a ruh pah pum pum, and prepare to be transported away from the stray pine needles and screaming children. And in the event that you’d like to here some music that isn’t themed exclusively around December 25th, head over to the DIY Listening Hub.

Turns out that Geldof and chums weren’t the only ones to release a Christmas single in 1984. It’s thirty years since George and Andrew gifted to the world their festive tale of nostalgia-laced heartbreak and ever since, nothing has even come close to knocking it from its spot as the ultimate Christmas tune. Britain’s national fondness for sadness and pessimism is supposedly reflected in ‘Fairytale of New York’ being voted our favourite yuletide hit, but Wham! lived up to that billing and then some. “Tell me baby, do you recognise me?” longs a disheartened George. How could you not recognise the smouldering George Michael of 1984? Admittedly he was a little confused at the time and as things unravelled, it might not have worked out. Perhaps she knew? Many have tried to do this track justice with their own versions; The xx made it moodier, Peace went cool and jangly and Cascada made us vomit, but there’ll only ever be one version. Ultimately this is the only Christmas song, that you’ll ever really need. (Liam McNeilly - @liammcneilly)

Forgot thousands of candles and decking the halls with (incredibly fire-hazardous) boughs of holly, and all that usual tripe about bells and white Christmas. Everyone knows it doesn't snow in England at Christmas anyway - realistically the British experience of snow is more to do with late-Febuary sludge and rail delays than bloody jingly bobsleighs. The Waitresses' festive effort is about all of the mundane, annoying nonsense that most Christmas songs cheerfully neglect; constantly running out of time, energy and motivation. "You mean you forgot cranberries too?" she laughs at the end of the song, having spotted the guy she's been half-heartedly trying to date throughout '81 at the all-night grocery store. Presumably they end up having themselves a nice old Christmas eve together with the world's smallest turkey from A&P. If 'Last Christmas' is the greatest ode to post-break up bitterness in the advent month, 'Christmas Wrapping' is its far less dramatic, but equally sassy, cousin. (El Hunt - @whattheel)

The best part of Christmas? Why, celebrating with your nearest and dearest, of course! And nothing condenses the intoxicatingly jovial feeling of partying with loved ones into song format quite like Sudakistan's cover of Feliz Navidad. It's even structured like a night on the town: a warm up ('pre drinks'), followed by loud percussion (the club portion of the night), and an ever-so-gentle conclusion (passing out cold). It's the perfect drunken sing-a-long, packed with excitement and sincerity. So what are you waiting for? Take another swig of your drink, drum along on the nearest surface, and let a special someone know just how much "I wanna wish you a Merry Christmas, from the bottom of my heart." (Jessica Goodman @alotlikejessica)

As much as Christmas is a time for celebration, for many, it’s also a time for rueful recrimination. As such, there’s no one better to soundtrack a melancholy Christmas than indie rock’s resident curmudgeon Mark Kozelek. For all Kozelek’s outwardly grumpy miserabilia, what he always does with his music is make wonderfully, tender, intimate and emotional songs. Recorded for his 2014 'Christmas Carols' album, his version of The Pretenders swooning Christmas ballad ‘2000 Miles’ is appropriately powerful in its heart-wrenching beauty. There’s probably many people out there this Christmas just like Mark Kozelek and his lovely winsome crooning might help to provide comfort to anyone suffering from a festive malady. (Martyn Young - @martynyoung184)

Oceansize - Walking In The Air

Until 2:13 in, you could be forgiven for wondering what Manchester post-­rock titans Oceansize were thinking when they released this Christmas cover way back in 2007. Bearing all the hallmarks of one of their sparse interludes from debut album 'Effloresce', this is gently lilting, reverb-­heavy, and surprisingly faithful rendition of a classic piece of music. However, that milestone reached, their three guitarists step on their distortion pedals; the effect is stunning. Once the volume level dips again, there's a glorious pseudo­polyrhythm under the middle eight and even some backing vocals way down in the mix as the guitars pick out the main melody. When the track finally does climax at around the five­ minute mark, it's with a bombastic rush that probably they never quite felt appropriate for their own more serious music. A brilliant Christmas cover, not only offering a completely new take on a well­-worn classic, but also showing a different side to the band that played it. (Alex Lynham - @hipsters_unite)

Destiny's Child might've bought the shoes on their feet (they bought them) and the clothes they're wearing (they bought them, too), but '8th Days of Christmas' is an anthem aimed at the festive spirit of generosity, instead. A very specific sort of generosity, mind you; namely receiving loads and loads of presents from ya boo. As one Youtube commenter says woefully on the video "nowhere do they mention giving a gift in return." This is a keen observation, but move past the slight moral vacuum - and the question of what the hell happened to the other 4 remaining days of Christmas - and this is the Christmas song that just keeps on giving. Hook after pop hook plays into traditional yuletide melodies, but this is driven by vocal acrobatics and horn parps instead. With the excitable abandon of childred let loose circling items in the Argos catalogue with a blue biro, Beyonce and Kelly gleefully frolic around a closed toy store in the video, with poor Michelle characteristically clambering over dislodged goods and attempting to keep up. Won't somebody think of Michelle? (El Hunt - @whattheel)

Shy Nature got into the Christmas spirit this year by releasing recent single 'Sweet Winter Rain'. Taking a snide sideways glance at the holiday season, they managed to, inadvertently or not, make a track that could get away with being released any time of year (i.e. it isn’t just a cliché filled cash in on the season). So there are some sleigh bells in there, but beyond that it's got a moody, sneering appeal founded on some attractive, bluesy guitar work and humorously deadpan lyrics. More cynical and understated than joyful and triumphant, it bears a sentiment that might bring comfort to a certain curmudgeonly sector of society this Christmas, as well as the indie kids. (Louis Haines - @lgbhaines)

Shy Nature share new track ‘Tonight Is On Your Side’

Ode to youth and freedom is taken from the London group’s new release. 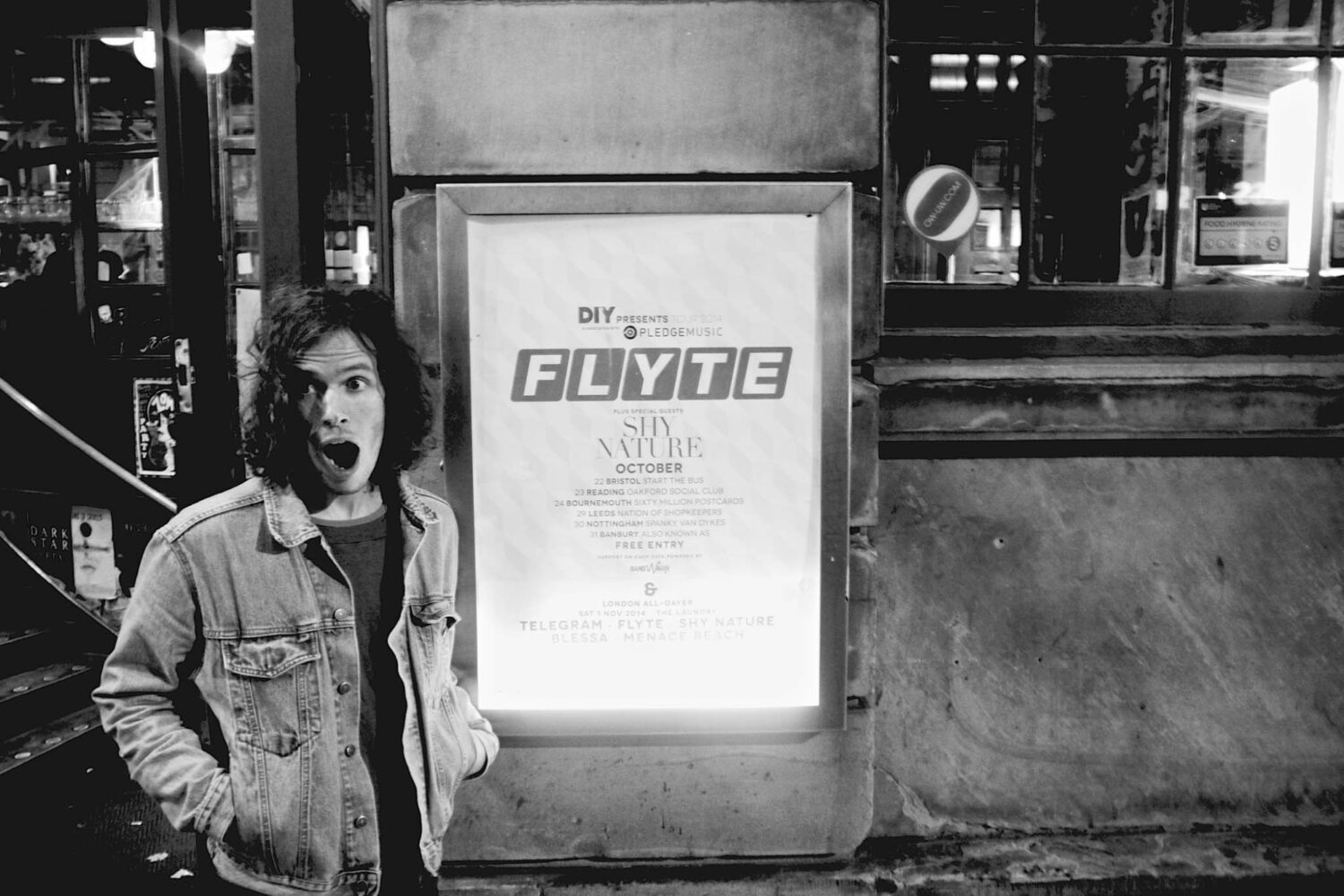 The band’s time on the DIY Presents Tour 2014… in photo form.

At the DIY all-dayer, the London trio explain how they formed a bond with this year’s tour headliners. 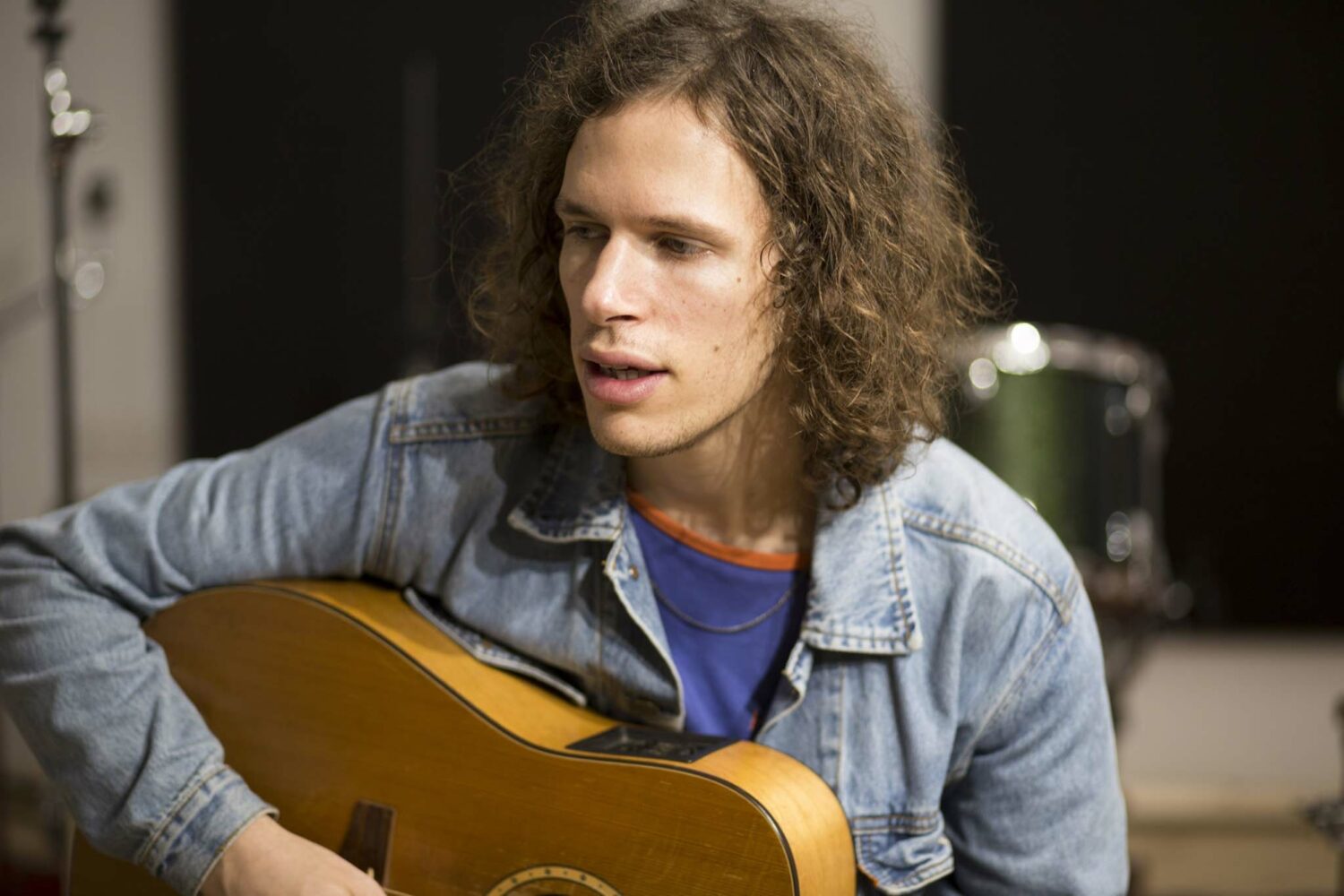