Who is Father John Misty? Who is Josh Tillman? The art of untangling the person and the artist has long been at the heart of understanding music. Where are the lines drawn and where do they blur? In some ways two men sit in front of me: there’s Josh Tillman, the singer songwriter who produced seven albums and drummed in Fleet Foxes, and there’s his louche Father John Misty alias, drinking and drugging his way through life. But as with many things, it’s clear the actual answer is both much simpler and much more complicated than that.

“Father John Misty, as a name, is kind of a thought experiment,” he explains. “For me, I made all these albums under my own name, and at some point I realised that J Tillman had become this alter ego, this heightened persona that bore little resemblance to me and my experiences. And I found that alarmingly disconcerting.

“Identity is really just an arbitrary construct so I’m sort of daring the listener to leave their ideas about Josh Tillman, the archetype of singer-songwriter, and to judge it based purely on the material itself. Because Father John Misty is a patently absurd name. It really has zero meaning. It’s nice phonetically and it’s hilarious on a matinee – it looks like a Christian puppet show is happening. But there is really only Josh Tillman. It’s a red herring if anything.”

Well, that’s that cleared up then. Though that idea becomes even knottier after you’ve heard ‘I Love You, Honeybear’, his dazzling new album, which is so devastatingly personal it’s clear this is no character. On his debut album ‘Fear Fun’ there was the idea that he was playing with the concept of the singer-songwriter (just take ‘I’m Writing A Novel’, an arch road song that tells the story of making of the album) but here there is no pretence at play. This is a man with his heart held out in front of him.

“I thought I was making this cool, tough record about love.”

What began as an album about the topic of love – and not wanting to be sentimental – became about him, a truly personal portrait of his love for his new wife, Emma, that was so intimate it left him feeling nervous about playing it for other people. “I thought I was making this cool, tough record about love. I thought ‘I’m gonna take down the white stag of a love song. I’m going to do it justice and it’s just going to be an obscene, profoundly unconventional love album’. But by the time we were mixing I was like, ‘Dear Jesus, I’ve made a really vulnerable album about my fear and about my pettiness, jealousy and self-loathing and neediness’ and I play it for people and I just want to fall into the floor.”

“When I started this process the only guiding principle was ‘This can’t be sentimental’, so I was kind of approaching everything with a wink. But the soufflé just wouldn’t rise. I couldn’t figure out what was missing. And at one point my wife Emma was like, ‘You just can’t be afraid to let these songs be beautiful’, and that really clicked.”

So he let go of everything: crooning on ‘When You’re Smiling And Astride Me’ that “I’ve got nothing to hide from you. Kissing my brother in my dreams or finding God-knows in my jeans” and on the title track “I brought my mother’s depression, you’ve got your father’s scorn and a wayward aunt’s schizophrenia.” It makes for an album that is disconcertingly tender, brutal and moving. A touching tribute to a unique kind of love and a very personal telling of it. Indeed, it’s so personal to him that his wife is mentioned by name.

But Emma was more than just mere muse. She was involved throughout the album, there at every stage, acting as his sounding board and maintaining the quality control when Josh was trying to piece it together. “We were kind of having some fights while I was making the album, because I’d be working on this stuff for 16 hours in the studio and then come home. I was working on ‘Chateau (Lobby #4)’ for months. It was killing me – I just couldn’t get it to work. The first attempt was this Phil Spector girl group thing and that wasn’t working and I’d come home and play it to her and she can’t lie to me, she can’t tell me it’s great but I would lose it. ‘How Dare you!’ The irony of me writing this love song about her and me getting pissed off at her about her opinion.

“But she was right. And she’s my gold standard. If it works for her, it works for me. She deserves a producer credit.”

“I was approaching everything with a wink, but the soufflé just wouldn’t rise.”

Emma was also responsible for the lead track, ‘Bored In the USA’, making it on to the album. “I wasn’t going to put it on but Emma said that’s a great song, she even encouraged me to finish writing it. It existed in a couple of fragments for a year and she said, ‘Whatever happened to that song?’ So I went down to the basement and finished it.”

‘Bored In the USA’ is an anomaly on the album, both centrepiece and separate from the intimate confessional that makes up the rest of the record. It’s a wry opus on the modern romantic condition, complete with laughter track (especially on the pay off line “Keep my prescription filled and now I can’t get off”) and accompanied by a full orchestra and played on Letterman (“I’m just glad it came off because it was a big logistical battle”). It’s a commentary about the modern age of relationships, performed with a raised eyebrow, but it does tie in with the themes of the record.

“It just felt timely – I could have put it on the next album but maybe in a couple of years we’ll be living in the revolution. And there is something about the line ‘Oh good the strangers body’s still here, our arrangement hasn’t changed’, that does have a lot to do with the album thematically, basically treating other human beings as a consumer experience. The whole song is in this consumer language and I think we treat love that way. As something that you find or buy, not something you create.”

And this idea is what most of the rest of the album rails against. Trying to find new ways to explore the idea of love. How difficult was this idea of dealing with the topic in a non-sentimental way, of avoiding cliche? He laughs. “Well, there are songs like ‘(Nothing Good Ever Happens At The Goddamn) Thirsty Crow’ that is basically all cliches strung together. But I think it goes back to the fact that I realised this was an album about myself as opposed to an album about love topically. In some respects it was like ‘Who are these songs for? Are they just irrelevant to anyone except me?’ Is it useful to people?’ Hopefully it is.

“It would have been a challenge if I was trying to write love songs and that was the original hubris. ‘I’m gong to write these love songs that don’t suck, and not contrived.’ That would have been really tough to do. But I find it very easy to write about myself in my own voice. That was what the whole ‘Fear Fun’ experiment was about and that’s what made this album exhilarating. Now I know what I’m doing, and I’m ready to exert just a little more pressure – to flex that muscle a little harder this time around. But this intimacy was just what was happening in my life at the time.” 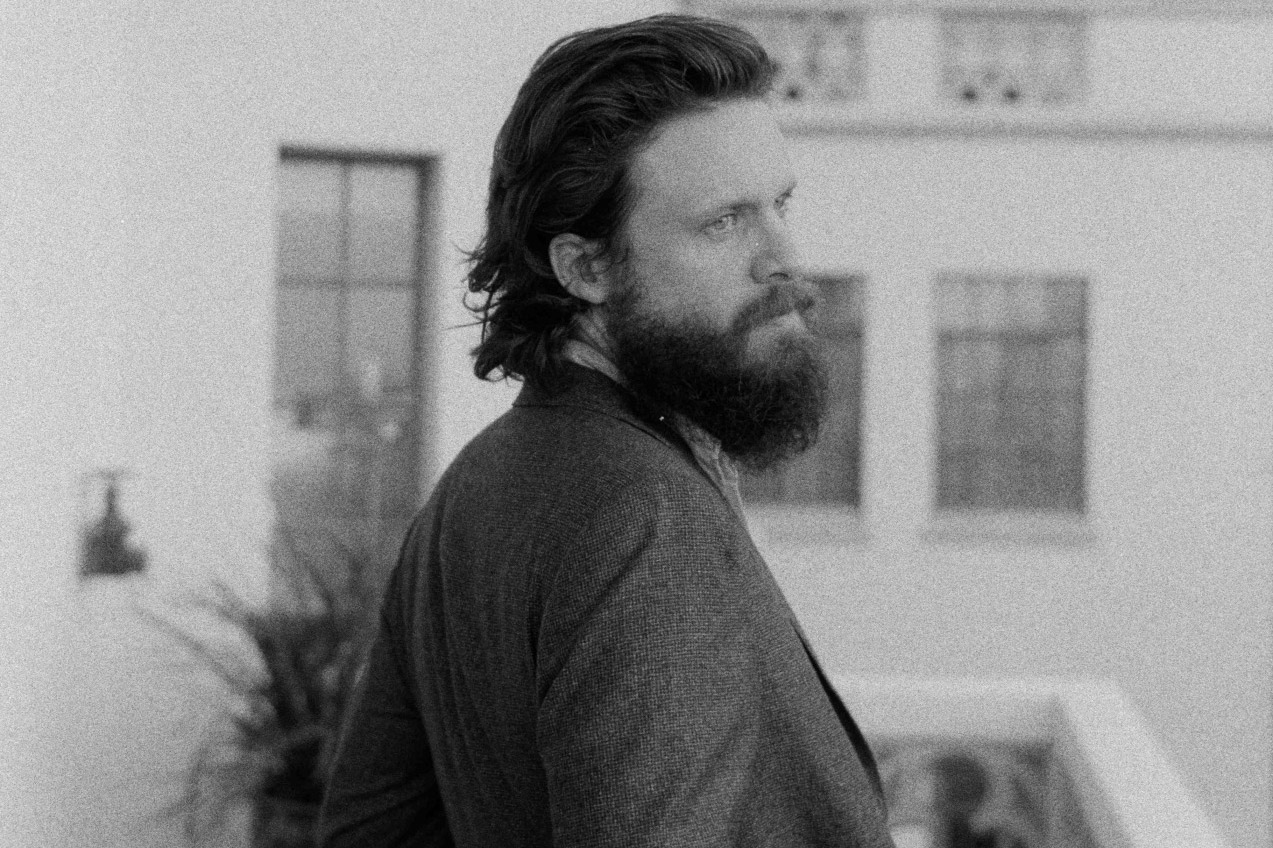 “Singing about kissing your brother in your dreams, there’s no precedent for that.”

It’s this intimacy that brings the record together. Though the album resides in the singer-songwriter spectrum the scope of this album ranges from the gospel folk of ‘Smiling and Astride Me’ through to the heavy rocking ‘Ideal Husband’. These disparate styles came about because of how the album was put together. “I was approaching every song like its own eco-sphere so it was hard to switch gears sometimes. There would be days when we were working on ‘Ideal Husband’ and then switch to ‘Smiling Astride Me’ and it would be like ‘What the fuck is this album?’ So the album felt very schizophrenic as we were working on it and I’m shocked it’s as cohesive as it is. But that was true of the last album as well.

“Sincerity was the secret ingredient this time around. On ‘Fear Fun’ songs like ‘I’m Writing a Novel’ were about the futility of trying to be original so it had to have the most cartoon-ish, hackneyed rock’n’roll imitation and that’s very clever but there wasn’t space for that here.”

And now, as his audience grows and the rooms he’s playing to become larger, how does he feel his artistic vision will shift with it? Does he feel pressure to play this very personal album to people who perhaps see him as something else, as the louche singer-songwriter? “That was what was terrifying about this album. Now my voice is reverberating this much louder, am I really going to fill it with my dirty underwear? That‘s what worries me – that I’d fill in the space with this sentimental crap. It’s easy for me to sing a song about hooking up in a graveyard and getting high. All that shit works in the rock paradigm. Singing about kissing your brother in your dreams. There’s no precedent for that so it was kind of scary.”

It brings us back to the idea of Father John Misty; this ability to be the character rather than the man Josh Tillman. “Some nights the last thing I want to do is get up on stage and do the thing I have to do but I can’t sit on the floor and cry. I get up there and I sing. To have this mask is useful. You put a lot in by using your own name. I guess I use it selectively because if I go up on stage and you don’t want to it but you do it anyway they’ll say Josh Tillman is a fraud. I don’t know, I’ve already abused my own name enough for one lifetime.”

Taken from the February issue of DIY - order your copy below. Father John Misty’s new album 'I Love You, Honeybear' is out now via Bella Union.