Hop Along’s singer Frances Quinlan just has one of those voices. Burring and catching at the edges like a bit of paper blocking a bass amp, and charged with Philly-flavoured drawl, it’s raw and unmistakable on record. A potent voice, it has always formed the centre - and at times the main overruling draw - of Hop Along. On ‘Painted Shut,’ though, the band seem to truly find the footfalls of their musical stride, too, and they’re armed with a balloon full of effortless aplomb from start to finish.

The band’s last album ‘Get Disowned’ built a monolithic loft extension onto the saccharine-nested freak-folk of ‘Freshman Year’ - Frances Quinlan’s lo-fi solo effort that she made back in college. The intimate poetry of Quinlan’s diary scribblings began to find proper root in songs like ‘Kids on the Boardwalk’, with stories about crude drawings and playground gossip taking on a slightly sordid, but very human, undertone.

If this outstanding record doesn’t wake everyone else up, nothing on earth will.

It’s a finer balance still that comes to the fore in Hop Along’s newest material. Batshit crazy guitar solos curl outwards at every turn, and the journey that the record takes is wonderfully unpredictable, too. First single ‘Waitress’ might start off jauntily enough, but by the end it’s a stomach-plummeting roller coaster; that terrible falling feeling of laying eyes on somebody who knows you as “the worst possible version of what I’d done.” In the case of ‘Powerful Man’ statements like “I was the only other adult around,” take on carefully loaded and regretful significance’. By the closing track - ‘Sister Cities’ - the entire operation explodes and self-combusts into desperate yelping anger.

While Hop Along’s frontwoman’s vocal still acts like a pummelling, emotive and unmistakable instrument, Hop Along’s sound has expanded accordingly on ‘Painted Shut’ to fully accommodate her storytelling. For the Philly punk enthusiasts and garage-heads Hop Along are established scene staples already, and with ‘Painted Shut’ they yell louder still from the rooftops. If this outstanding record doesn’t wake everyone else up, nothing on earth will. 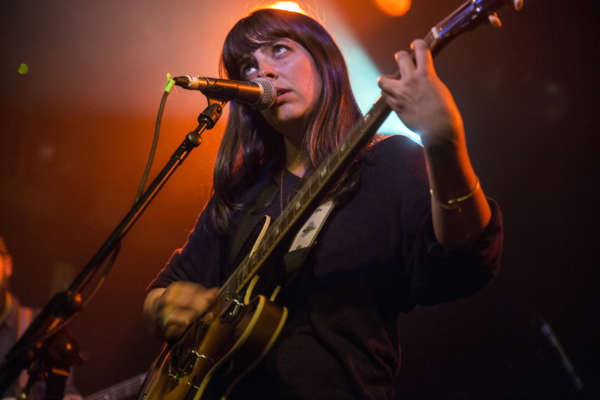