The music that Jimmy Whispers makes is proper lo-fi. As in practically no-fi; the introduction to his LP ‘Summer In Pain’ makes that pretty clear when it sees him yell: “COMING IN AT SIX FOOT NOTHING…THE GREATEST BEDROOM POPPER IN THE TRI-STATE AREA” like some sort of deranged boxing promoter. Take the way the album was recorded: Most people’s voice memos consist of pointless recordings, drunken monologues and their best mate’s Gollum impression. Jimmy Whispers, however, set the bar a little bit higher when he recorded the whole bloody album using his iPhone.

Although this recording method started off as “a way of demoing songs very quickly as the organ I use has built in drums and basslines”, it created a unique sound that’s pretty unparalleled. It makes everything sound beautifully and childlike simple - ‘Heart Don’t Know’ sounds oceanic in its melancholic waves of organ chords and tin-drum machine while ‘Heartbeat’ somehow simultaneously seems like it’s being played right next to you and in some sort of distant cosmic galaxy. Through recording it with just a phone it creates the sound of late-night messages, desperate voicemails and drunken calls with weaving, warped melodies flitting back-and-forth throughout.

There’s a beautifully Jonathan Richman-type childlike quality to the music and the man behind it; Whispers sees the album as promoting a “message of love and mercy and forgiveness… it’s kind of having to deal with the violence that was going on in Chicago that summer and what was going on with me personally and with all the people around me.” This expression of eternal love runs-hand-in-hand with a polar theme of pain in his music; from the desperate croons of ‘Pain in my Love’ to the “haunting feeling / I cannot explain” pondered on ‘Summer in Pain’.

Whispers sees music as helping pain but mainly “expressing that feeling” of suffering. “I romanticise everything”, he says at one point, and it’s clear that he does; from his many T-Shirts with ‘Summer In Pain’ written on to his accompanying street art and zines to “get the message out before I played live or actually put out the record,” the whole idea of ‘Summer In Pain’ has somehow transcended an album title, message or brand. It’s love yet pain at the same time, something “very hard to explain” and something desperately personal yet made public.

The rawness of his music is utterly convincing; ‘I Love You’ for example is for the most part just desperate repetitions of the titular phrase over a seesawing organ, yet it seems so much more than that; it’s piercingly genuine and real. Nonetheless, Whispers has experimented with a fuller sound and has even started doing some stuff with new-kids-on-the-block Whitney: “They’re some of my best friends in Chicago and they’ve wanted to play with me for a little bit. They’re kind of like The Band! I’m not trying to invest too much into that because I still like the way I record. But we’re going to be recording a little bit together this fall.”

Along with this, he’s leaving America for the first time to tour Europe; including a must-see date at the Old Blue Last tonight, on 22nd August. Considering there’s several cultish videos and GIFs of him performing with a corn dog as a microphone, it’s sure to be a pretty tasty show indeed. Near to the end of our Skype interview, he pauses and looks shocked: “Oh I have my video on! I didn’t notice! I thought it was a phone call” and has a minor-scale giggling fit. It’s the perfect analogy for his music; it’s so introspective and personal it feels like you’re right next to him hearing his innermost thoughts and desires, with him forgetting that you’re even there listening.

Jimmy Whispers' 'Summer in Pain' album is out now on Moniker Records and Field Mates Records. He plays his first London show for DIY Presents tonight at The Old Blue Last. It's free entry. 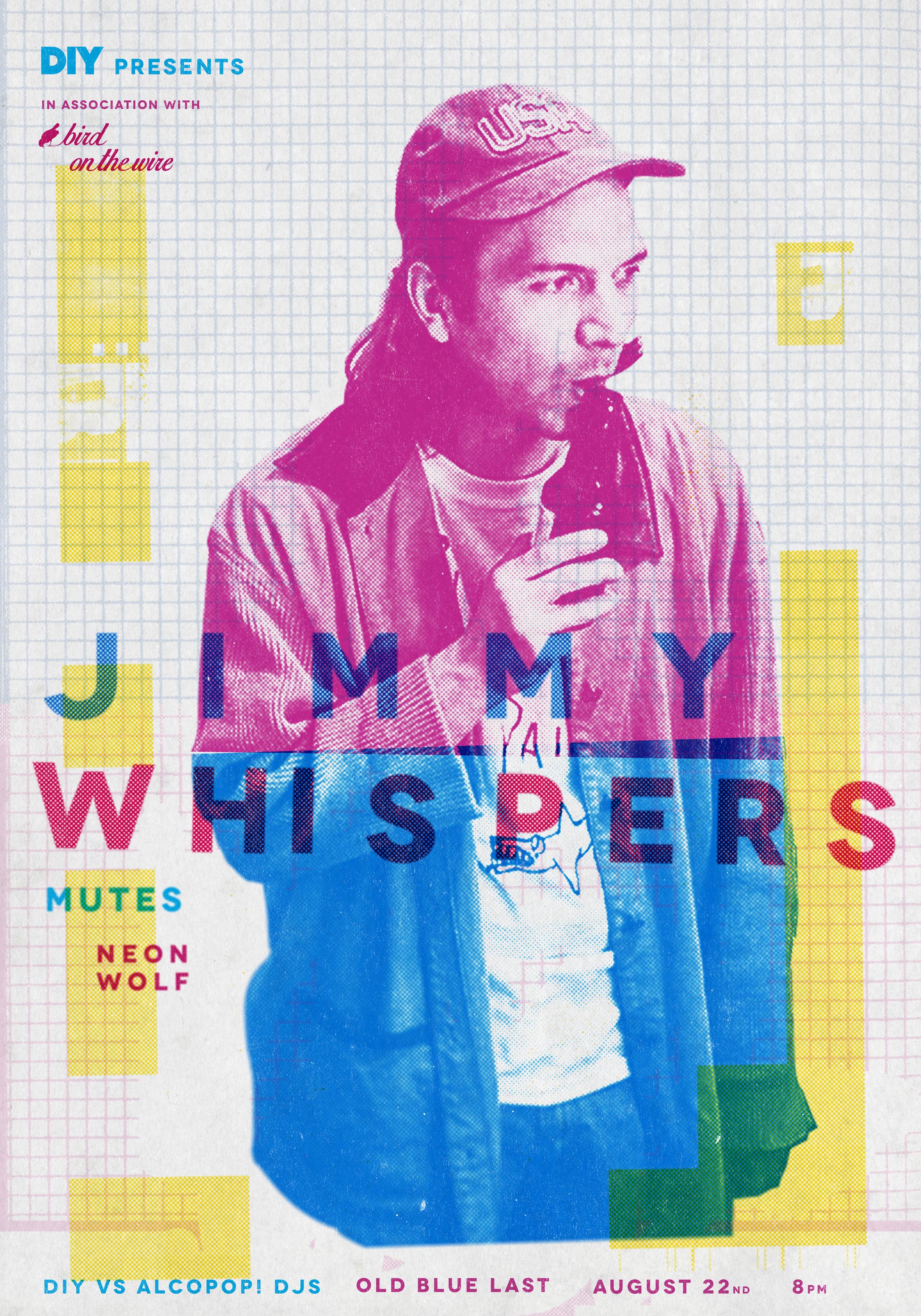 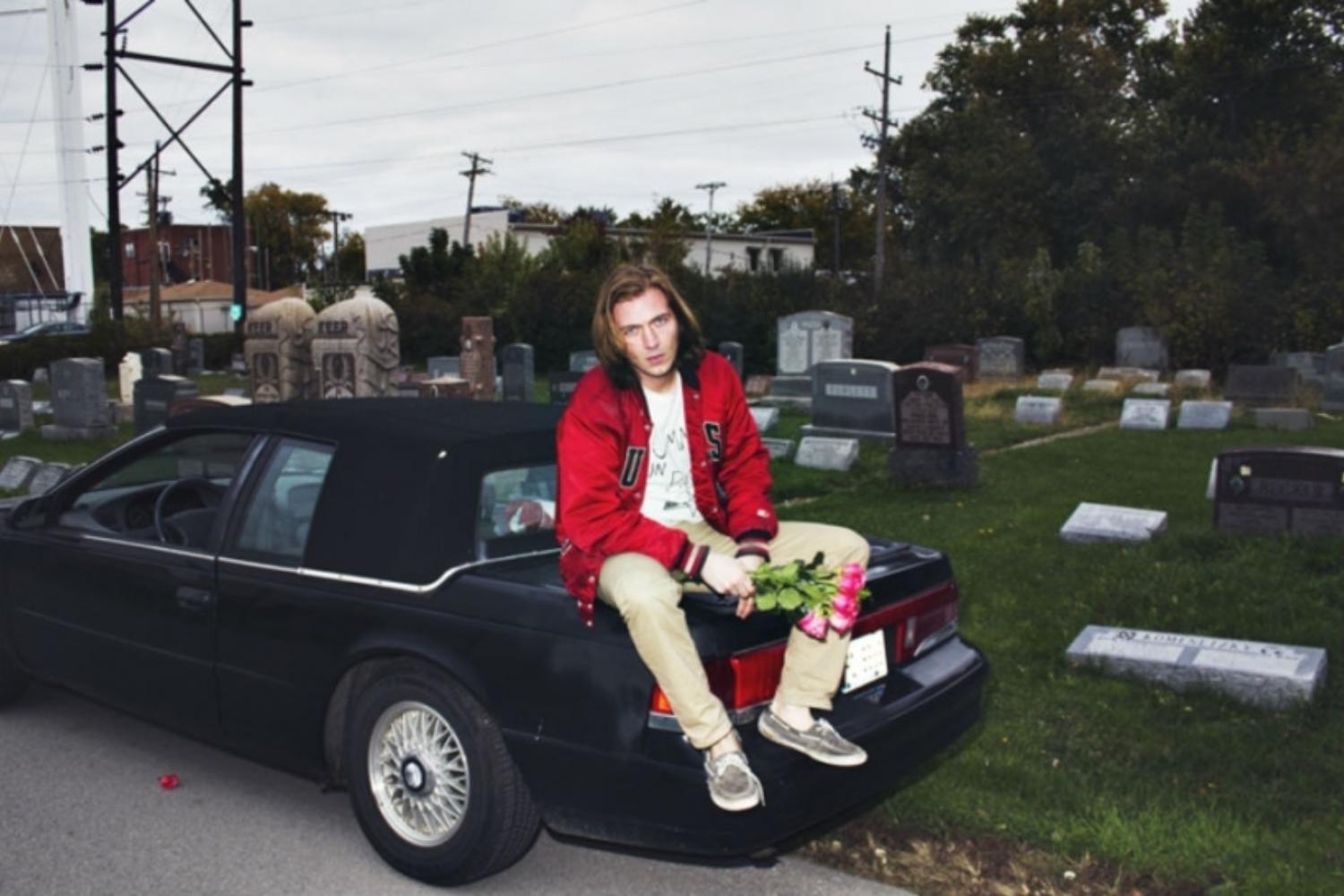 Chicago oddball’s 23-minute blast of bonkers comes out next week.