Mention the name Nelly Furtado, and it’s highly likely that the first thing to come to mind is her absolute truckload of pop bangers. It’s not an overstatement to claim that anybody who hasn’t at least heard ‘I’m Like A Bird,’ and ‘Maneater’ must’ve spent a fair portion of the Noughties living hermit-like under a rock, and it’s also fair to say that most people can probably recite at least one word-perfect verse from ‘Promiscuous’ on demand. Played on the daily in supermarkets and gyms, on taxi radios, and at every bar out there, Nelly Furtado’s music is everywhere, and ubiquitous. But Nelly Furtado, herself? Well, for the last five years, she sort of disappeared.

Signing her first record deal at twenty – at an age where most people are still flailing about trying to master food shops and the big question of what the hell to do next – Nelly Furtado hit the big time, twice; first with her 2000 debut album ‘Whoa, Nelly!,’ and then the double-shot of that that huge comeback record ‘Loose’ six years later. Meanwhile, her life has played out in fast-forward. “I’m 38, and I’m getting my first apartment in New York City!” hoots Nelly today, back in London for the first time in years. She’s still elated from the experience of taking a trip on the tube earlier this week; something she hasn’t done since she went backpacking in her teens. “It’s kind of funny! Life’s always been a bit backwards for me,” she admits .“Always in reverse.”

Buying an oyster card is just the start of how much things have changed for Nelly Furtado in her time away. Back releasing music again after almost five years hidden from the limelight, her sixth album ‘The Ride’ throws up more curveballs than your average bowling game, to put things mildly. Produced by John Congleton – who you’d more readily associate with the likes of St Vincent, Alvvays, and Unknown Mortal Orchestra than Nelly Furtado – it’s also an honest, oddball examination, fleeing away from her own celebrity status, and trying to find the core of herself. Seventeen years on from ‘I’m Like A Bird,’ it seems she’s finally found where her soul is. 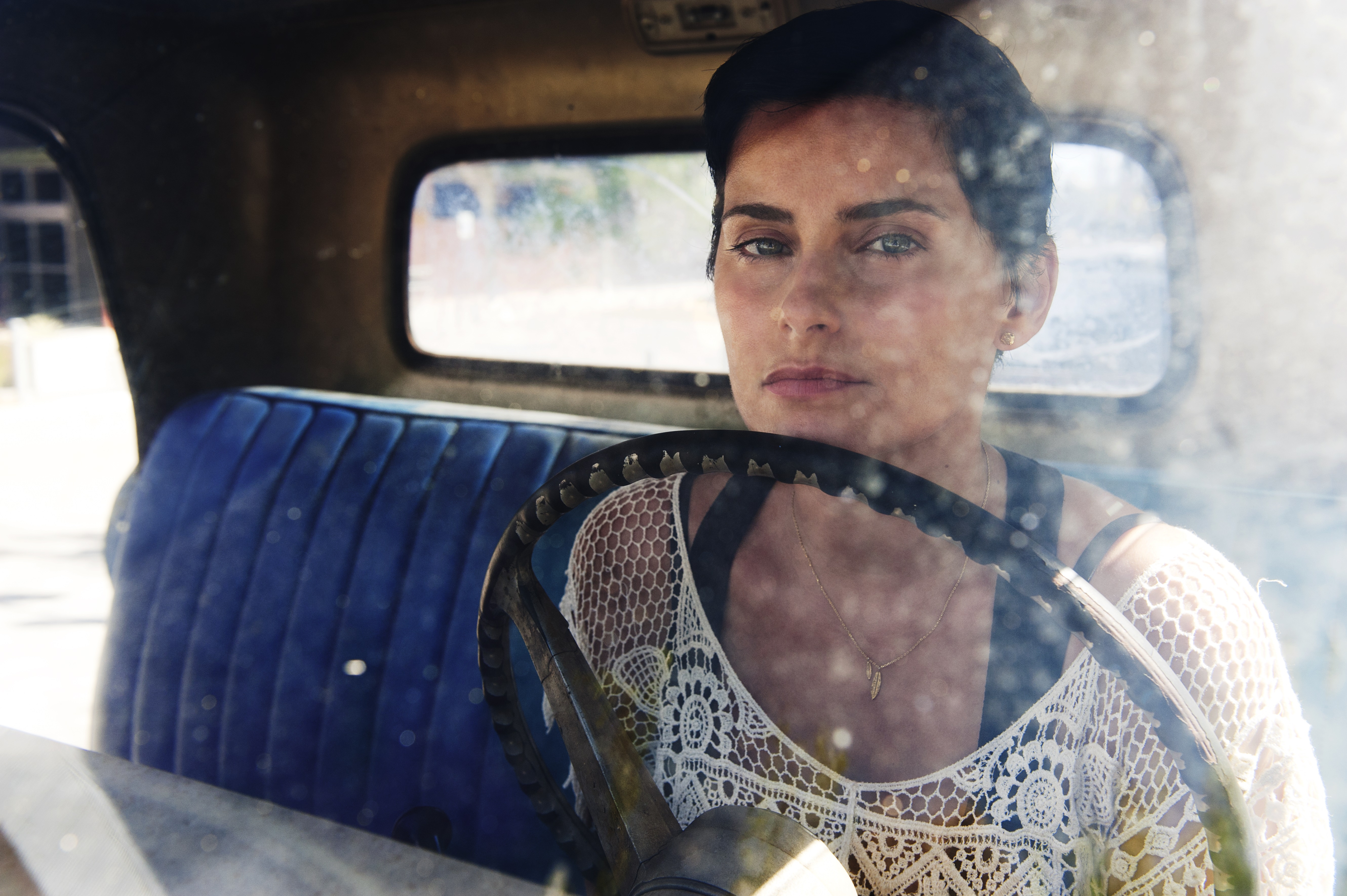 “St Vincent came into my dressing room, and I ended up giving her a cardboard cut-out of my head because I was so nervous.”

Nelly Furtado's first revelation came to her at a surprising moment. “I was at a large craft superstore, and I don't even remember why I went,” she laughs. “I found myself between the glitter glue and the picture frames, and I was like, 'what am I doing here?' I was not in a good state of mind.” Next thing she knew, she was back in her car, and racing across town on a whim to Cosmos Records, a store she hadn't visited in well over a decade. “I walked in, and we put on 'Adventures in Paradise' by Minnie Riperton, and Rotary Connection,” Nelly remembers. “And then I got on the phone to Aki [Abe], the owner. That night on a whim I wrote him an email,” she laughs. “I wrote: 'I know this is going to sound a little bit strange, but today I felt the most joy I've felt in as long as I can remember, and I was just wondering if I could work for you at your store?'” Nelly got the job. ”I sold some records, learned how to price them, took people's credit card payments and such. I still visit every now and then,” she smiles.

Nelly Furtado's stint working at Cosmos set something off in her mind, and for the first time in ages, she felt herself excited by music again. “You have to expand your numbers every year, or else you're “failing”, quote, un-quote,” she says, reflecting on her experience of being a pop artist. “It's really bizarre. You put this pressure on yourself. I tried to be more like a business woman at first, but I didn't really like it. I missed the bohemian singer-songwriter girl!” she adds, with a grin. “I used to be like, 'I'm going to put on my flowery dress so I can write some songs!' All of a sudden that became something I only did when it was time to make a record, you know? I needed it to become a daily process again.”

Her next step was signing up to every activity she could find. From ceramics and sewing, to play-writing and librarian work, she gave pretty much everything a crack; signing up to classes under her pseudonym, and middle name, Kim. “I was just trying to find my footing, reaching out in the dark trying to grab onto something creative,” she explains. “I had broken through some huge paradigms in my life; relationship paradigms both professional and personal. I just thought, I'm gunna jump, and see what happens. Have a parachute, maybe? Tightroping without a net has really helped me as a person, it's got my synapses firing,” she adds. “I had to take care of... my soul, really. I had to make myself happy again. I was kind of unhappy for a little while, and I had to do that hard work. That's what a lot of the songs are about, really.”

“I just thought, I’m gunna jump, and see what happens.”

Nelly Furtado's choice to team up with John Congleton to make a raw, off-kilter, and self-examining alternative pop album was a jump into the unknown, and then some. The unlikely pair were first brought together by his frequent collaborator St Vincent, who ambushed Nelly after the two of them shared a bill at Tokyo's Summer Sonic. “She came into my dressing room, and I ended up giving her a cardboard cut-out of my head because I was so nervous,” Nelly howls. “I was just feeling very self-conscious with all my shoes and dresses and jewellery in the presence of this true-life rock star, Annie [Clark]” she admits. “We kept in touch, and I eventually asked her for John's contact, and she connected us. It was really key.”

“I really wanted to be the first pop artist he worked with,” she grins quietly. “A little voice in my head said 'you need to work with John Congleton, cos this could be really cool'. There he is, this uber-cool alternative punk rock producer, and then there's me,” Nelly laughs, “with the very mainstream pop that I've made over the years. As eclectic as it can be, it's still pop. We both had some skin in the game, working with each other. There were times where he really pushed me in ways that I couldn't have pushed myself. It's kind of unexpected,” she laughs, well aware of their jarring musical styles, "you look at our discographies, and go 'what the hell?”

Talking of Nelly Furtado's discography, she's finally reached the point where hearing her own, older music blasting out of yet another speaker doesn't want to make her go bright red and wither away into a corner. Recently at a club, she was dancing gleefully next to an oblivious woman who was belting her lungs out to 'Promiscuous' – before she turned around to see Actual Nelly Furtado looking on in amusement. “And then we became friends!” she says. “I find it most awkward when I'm in a friend's car,” Nelly adds. "They just don't know what to do. Shall we turn it up, shall we chuckle, shall we turn it off?! What's the right option? We usually just laugh.”

“Songs are funny things, because when they become really ubiquitous,” Nelly adds, “are they really yours anymore? It becomes its own church, and you were lucky to be a part of it! It becomes the mascot in the furry costume, jumping around high-fiving people at the game. I got a mascot!” she declares proudly.

“I really wanted to emulate the music of my early teens,” Nelly ponders, looking back again at the songs that started everything; specifically 'Promiscuous'. “I mean, TLC wore condoms pinned on to their costumes, and that was unheard of at the time, they were these empowered totally woke women, and it was 1993!” she laughs. “We would go to the joke store and wear these massive over-sized joke condoms pinned on our clothes, and pin them on after we'd left the house so our parents wouldn't see them, obviously. I thought, let's bring that back. This is gonna be that same woman that has a condom in her purse. These are things that need to be talked about. Though it was difficult,” she shrugs, "cos some people took it the wrong way, ultimately it's positive.”

Looking back to where it all began – and taking stock of 'The Ride' and her newly reenergised creativity – Nelly Furtado has but one regret. She feels bad, she says, for using birds as a metaphor for flitty, indecisiveness. “It's kind of odd, 'I'm Like A Bird',” she admits. “Because I really like birds. I really do! When I was little, all I wanted to do was be like Snow White, and have the animals talk to me.”

“If I was a bird...” she concludes, “ I'd be a bald eagle. The North American Bald Eagle. Majestic! I think it's a really spiritual animal! Eagles tend to appear at the right time I think.”

Nelly Furtado's new album 'The Ride' is out now.