Friday 24th June 2016 was a strange day for most of the world, but it was an especially odd one for Goat Girl. While the majority of the UK and beyond was either celebrating or – if you’re a more reasonable human - mourning the Brexit result, Lottie ‘Clottie Cream’, Ellie ‘L.E.D’, Naima Jelly and Rosy Bones were inking a deal with Rough Trade. “It was such a bittersweet day. Like, should I feel happy or fucking so sad?” recalls vocalist Lottie, nursing a thundering hangover after a particularly boisterous gig at local haunt The Windmill the night before. “Such a weird one. We’ll remember it forever.”

If you were prone to that sort of thing, you could see it as the universe trying to tell us all something. Sure, the adults might have royally fucked it, but here comes a band for a generation determined not to follow suit.

Hailing from the current prolific musical hub of South London and imbued with an innate ability to voice the socio-political concerns of their peers with wit and style, Goat Girl are exactly the tonic that’s needed right now. From the sub-two minute rattle of debut single ‘Scum’ and its grimly appropriate opening (“I honestly do think that someone spiked their drinks/ How can an entire nation be so fucking thick?”), the quartet introduced themselves as a band capable of expressing these moments of universal despair via the medium of dry, undiluted one-liners. Of their four singles to date, only one clocks in at over 150 seconds. Goat Girl don’t waste time or words; these are direct, streamlined jabs that often don’t even bother with such trivialities as a chorus. “It’s all in the taste of irony and tongue-in-cheek humour – I hope people get that,” notes Lottie. “It’s [about] the ridiculousness of the situation and our society right now. It’s so funny, it’s insane. You have to laugh…” 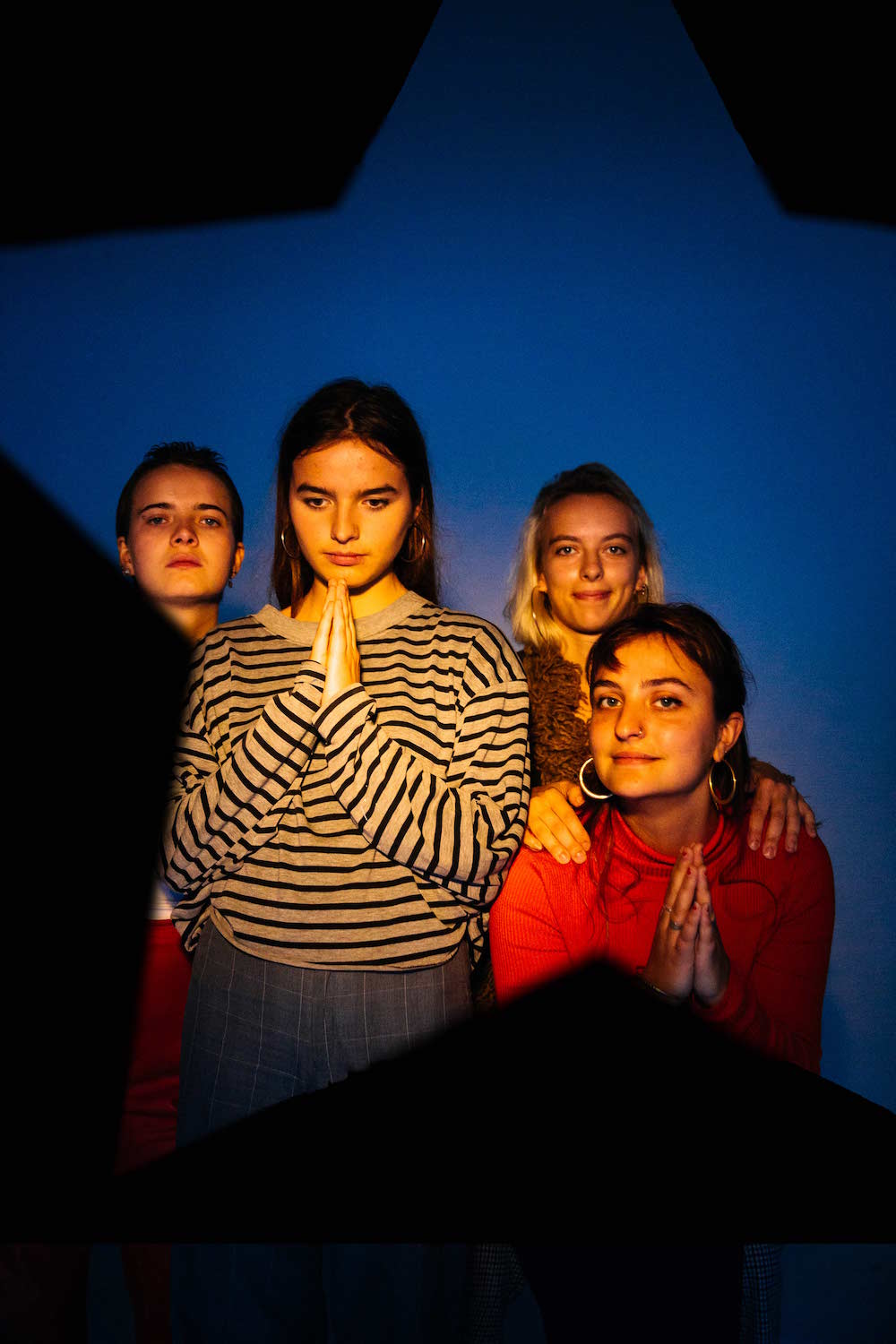 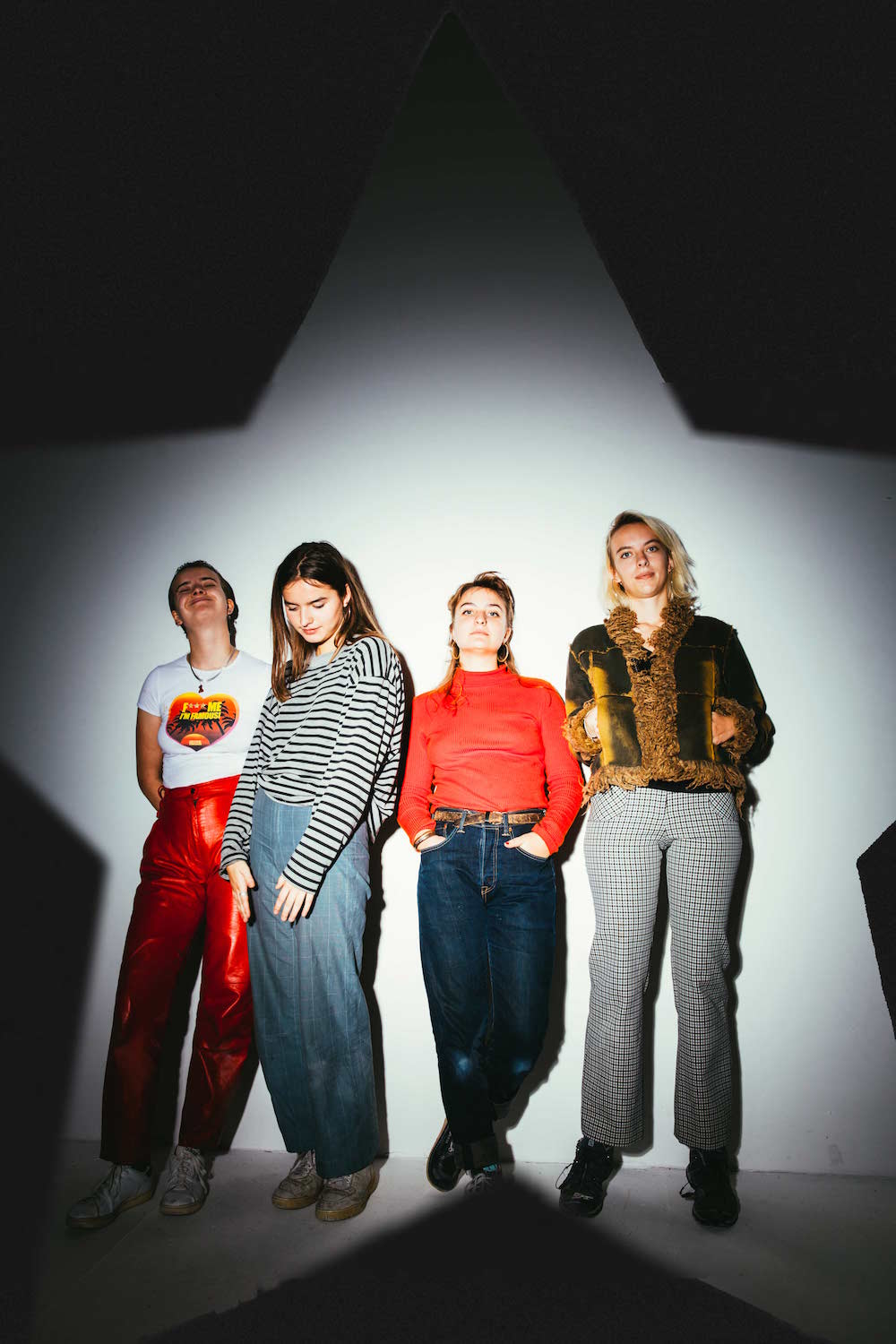 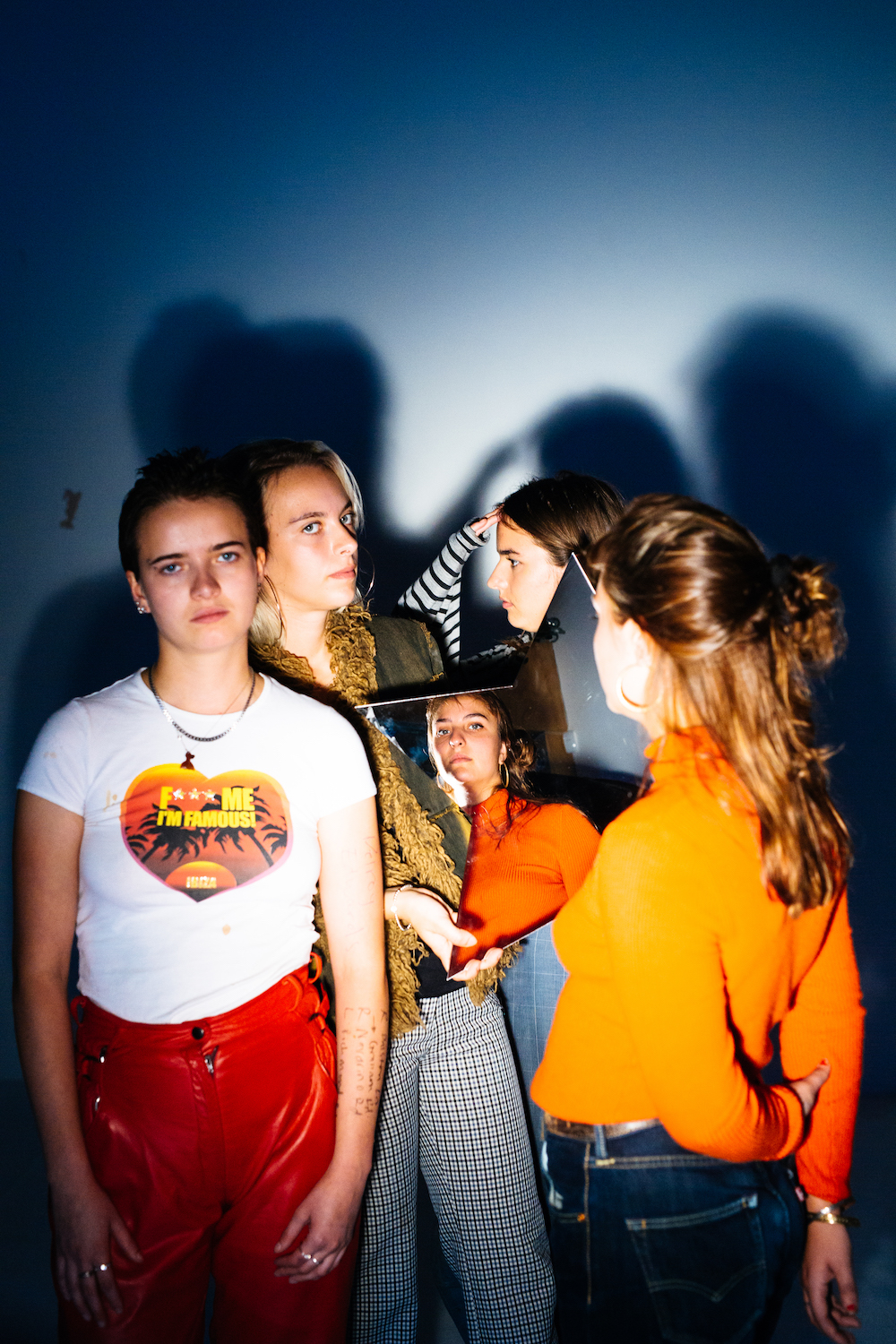 “I find it quite special seeing four powerful women on stage.”

Yet, if Goat Girl stand currently as a band on the cusp of genuinely great things, then it all began in much more low-key fashion, as most friendships do. “I liked Lottie’s bag,” says a straight-faced Ellie, recalling her first encounter with the singer. “I remember we were at our friend’s house when I was about 14 and she had a hippy bag, like an Indian mirrored bag and I thought, ‘she’s cool’.” “I remember Naima being really funny. I told her she looked like Alice Glass and she was like, ‘Yeah, everyone says that’ and then threw up,” chimes in Lottie of finding their bassist. The trio began making music with a rotating cast of uninspiring drummers (“There was that one guy who couldn’t play for shit,” shudders Ellie. “It’s actually kind of hard to play that out of time”) and nearly jacked it all in one summer before eventually meeting Rosy at the Windmill who “saved the day”.

The Windmill is a recurring theme in this story. A rough and ready Brixton boozer and gig space, it not only gave the band their drummer but also the community and space to hone their skills and build a burgeoning following. “It’s a safe space to play whatever music you want. Everyone is listening very intently, it’s not like people have a biased opinion when they watch. Everyone’s so open and that’s what’s so nice about it,” says Lottie of the venue. Alongside Goat Girl, it became a regular host for early shows from the likes of Shame, Matt Maltese, the sadly now defunct Dead Pretties and more. For a period in 2016, it seemed like every exciting band in the capital called The Windmill its home.

Perhaps unsurprisingly then, by the time Goat Girl came to actually release a single last September, the buzz around them had become feverous. Having initially kept their off-stage presence purposefully minimal - “I think it’s important to have an element of mystery,” explains Lottie. “In the beginning, we were anti-showing anything of ours online and just went off word of mouth, but I guess you can’t do that forever if you wanna be known” - they wound up trending on Twitter the day that ‘Country Sleaze’ and ‘Scum’ were finally unleashed into the world. “It’s kind of unnatural because it happened so quickly. I feel undeserving of it sometimes, to be honest,” mutters Lottie.

Prone to these kind of self-deprecating asides (when DIY profiled the band back in March, the singer declared that they were “kind of shit”), Goat Girl might not be natural extroverts but that’s part of their appeal. Signed a mere six months after completing their final line up, the band admit they’re still a work in progress - “We didn’t really have that much time to solidify our aesthetic and what we were going to do and definitely not going to do, so I think that’s happening now,” says Ellie – but they’re also a group of people with a strong sense of themselves. “A lot of people are like us in real life, they’re not like ‘HEYYYY MAN!!!’ all the time. I think it’s important for other women to see women on stage who aren’t trying to act like men,” she continues. “If you’re a girl that likes doing that then that’s fine, but it’s also good to know that if you don’t feel like jumping around – because that is [the product of] a lot of testosterone – then that’s just what rock was and it doesn’t have to be what rock is or what live music is. It can be whatever you want it to be. So I hope that people, male and female, look at us and take that away.” 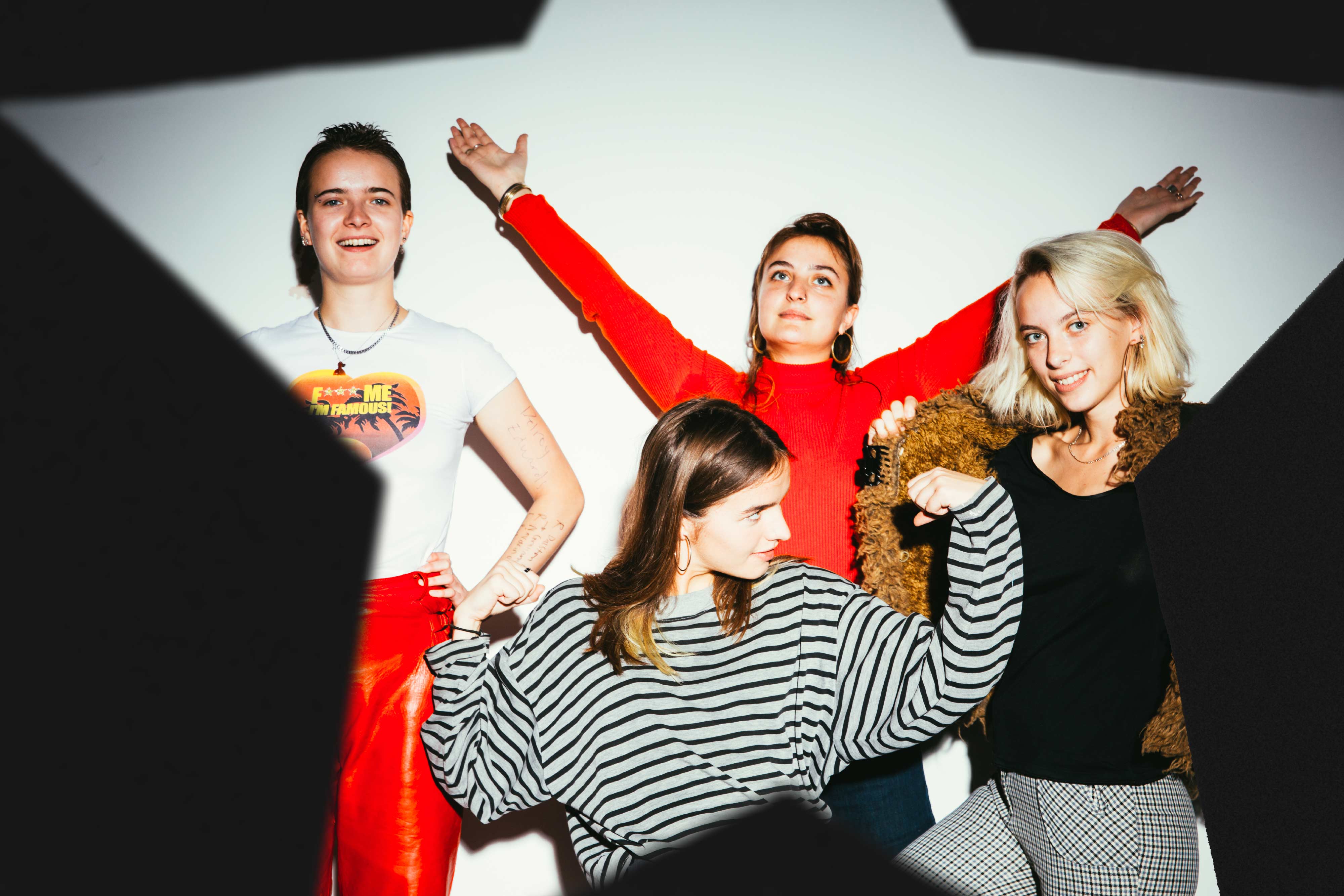 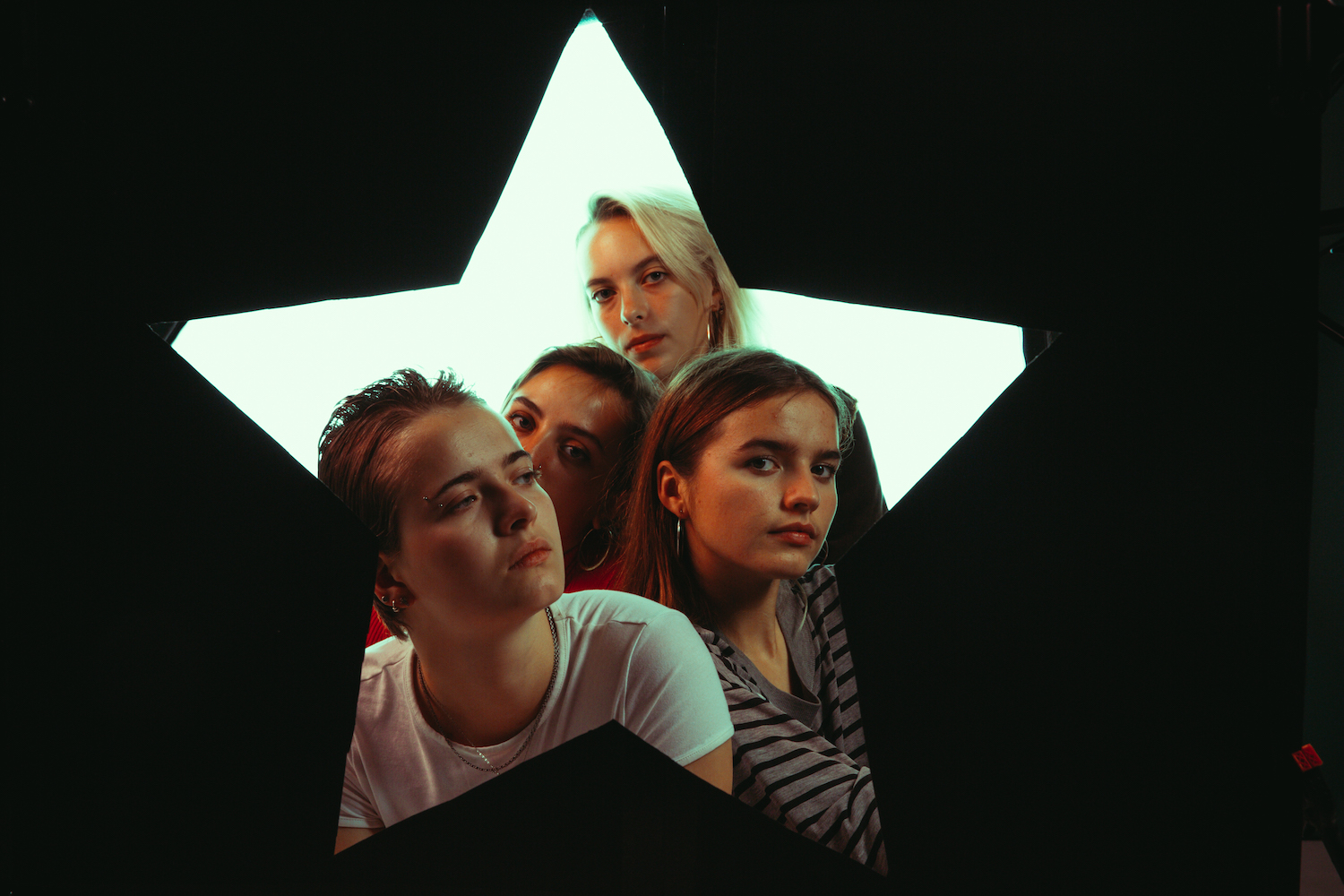 “The album is very different to live. It’s more, like, listenable?”

If there’s often an understandable hesitance to talk about gender in the industry at the risk of dredging up more reductive ‘women in music’ discussions, then Goat Girl are keen on starting a more positive narrative. “I find it quite special seeing four women on stage, powerful women that are doing well with music on their own. I hope that gives people better ideas of women in music or whatever,” begins Lottie. “And I do think it makes it quite different. There’s definitely a difference with genders and that can be celebrated as an interesting thing,” Ellie continues. “The question doesn’t have to be ‘What bad experiences have you had as women in the music industry?’ It can be like, ‘Oh it’s good because there’s something beautiful about femininity’.” “We’re just four young girls tryin’ to make a living...” laughs Lottie, adopting her finest Southern country twang.

So far, they’ve been trying and succeeding on their own terms. They may spend half their time playing high profile support tours with the likes of Marika Hackman and The Fall, but the band still regularly rock up to the Windmill, playing shows under such impenetrable pseudonyms as Ghost Girl and Goaty Gals (who could it possibly be?!) alongside bills of their South London pals. They’ve been in the studio too with producer Dan Carey (Mystery Jets, TOY), with a debut LP now fully finished and ready to go.

“It’s very different to live. It’s more, like, listenable?” suggests Ellie, amusingly. “You know what I mean though? Live we’re not energetic physically but our music is energetic, whereas the album is a bit more toned down in a good way. It’s more subtle and less harsh.” “My main problem with how we’re portrayed is just [that it’s] this kind of generic rock band, guitar music thing,” adds Lottie. “I feel like our sound is more expansive than that. We’re always changing our ideas about the band because we become bored by just sticking to one thing. I don’t wanna ever be in a bubble and I think that’s already kind of happened for us, the media have put us into a bubble that you can’t escape from – feminist punk or whatever, and I think we have way more potential than that.” She’s picking up steam now. “Everyone loves to compare people to different things but is that actually a good thing? To be like, oh you’re like PJ Harvey but you’re obviously not as good as her. Obviously it’s nice but we wanna be our own thing. I want us to be always changing.”

It’s an understandable irritation, because while Goat Girl may be many things – women and South Londoners and people who play guitars – they’re not defined by any one of them. Their small canon of releases so far might hint at one facet of the band, but you only need listen to the electronic drums that open ‘Cracker Drool’ or the slow march of B-side ‘Mighty Despair’ to know there’s a whole wealth more to come. “What I want is just to make different records of quality that are kind of timeless; I guess that’s what every musician wants,” shrugs Ellie. “Just to be appreciated, even if it’s in a cult way. I don’t think we have a goal in mind, we’re just going with the flow.”