The latest edition of Live at Leeds is creeping ever closer, and to celebrate the festival this year, we decided to quiz some of Leeds’ key musical players on all things Leeds. We got them to chat about exactly what makes the city such a great musical community, where their favourite venues are, and just what advice they’d give to first-time visitors to the festival this year.

For our roundtable, we’ve recruited James Brown, guitarist of Leeds’ finest noisemakers Pulled Apart By Horses, Matt Bradshaw from the city’s legendary Jumbo Records and Martin Dickson from the Leeds International Festival, the city’s annual festival of ideas and innovation.

So, without further ado, dive in.

What do you reckon makes Leeds such a special city for music?

James: The Leeds music scene has got a really strong sense of community and passion. Everyone helps each other out, I think it can be a really difficult thing to find within a city. We were welcomed with open arms and people helped us out in a big way from the offset. Everybody has each other's backs up here and there certainly isn't any kind of hierarchy or snobbery. I really admire Leeds for that.

Matt: I suppose many people would tend to say it’s the winning combo of having the Leeds College Of Music and a large University rubbing up against strong local scenes, loads of great venues - from grassroots DIY right up to the Arena - a club scene fermented over years and years that has come about from lugging soundsystems into pub function rooms to the warehouse type club nights we have now…Plus an eco-system that includes Record Shops, promotors, musicians, Radio Stations, recording studios and DJ’s still able to experiment and find their spaces to do things in…

Martin: Leeds has a rich heritage and often un-celebrated music scene, from the world leading club scene in the 90s, to the influential goth scene and the 2006 nu-Yorkshire scene. Leeds has a special DIY ethic running through it and a hugely supportive network. How many cities have three really great record shops so closely knit (Crash, Jumbo and Norman Records)? Got to be something special in that.

What are some of your favourite venues and bars to head to in the city?

James: As far as venues go, the Brudenell Social Club is the king of the castle. We love that place and what it stands for, plus it is really welcoming and cheap! Hyde Park Book Club is a new venue which I've popped to a few times this year. The folks there have done a smashing job of that place, great cosy bar with a sweet little cellar style venue underneath. Totally worth checking out. Another new bar in the city centre is The Brunswick. Proper chilled out place full of really good people, plus it has some of the best food and beer in Leeds.

Matt: Well, I’m sure many of your readers have heard of the legendary Brudenell Social Club. If you check out the Live At Leeds listings you’ll find a genuine hand-picked plethora of venues all very much ideally suited to the bands they’re hosting. Big, small, weird, wonderful and fun… Bar-wise, again Leeds is incredibly well resourced with bars whatever your taste... From the original craft beer joint The North Bar celebrating it’s 20th (yes, 20th?!) anniversary and still lightyears ahead of everyone else, to the incredible Outlaws Yacht Club who were way ahead of the curve regarding super soundsystems/rotary mixers and a who’s who of digging DJ’s…

Martin: From the award winning fd Arena to the multi-award winning Brudenell Social Club. Leeds is also lucky to have venues such as Headrow House and Belgrave Music hall, linking food and drink to amazing compact gig spaces. Leeds has an abundance of interesting bars and food spaces across the independent sector, too. From the cool Bundobust to the oldest pub in Leeds, Whitelocks, all a short walk away.

The Leeds music scene has got a really strong sense of community and passion.

What have been some of the most memorable gigs you’ve been to in Leeds?

James: I saw Shellac a couple of years ago at The Brudenell. I'm pretty sure I had an out of body experience at that show. It was unreal, the atmosphere, audience and band were all totally tuned into the same radio wave. Everything just seemed to be right. It was a gig I don't think I'll never forget. And it was f*cking loud.

Matt: Way too many to mention and with almost too many reasons too…From seeing world renowned artists playing tiny venues to up and comers before they were big Leeds has always had a nice ethos of supporting new bands… Amy Winehouse, The Make-Up, Kate Tempest, Nirvana… You name it, we’ve had em’ all (and seen them support small bands.)

Martin: I have a fair few! But the first official gig at the arena as Bruce Springsteen opened the venue. I had seen him three times previously but that was his best. Non-stop music for two and a half hours!
Doves in 1999, at The Cockpit on their first album promo tour. They had some small hype around them but this gig was next level, one of those you really needed t one there to feel how special it was. One of the best gigs under those railway arches for sure.

As well as Live at Leeds, the city also has a really good selection of music festivals - what do you think they offer to music fans? Which are your favourites?

James: There seems to be a lot of variety which is really appealing and opens up the scene to a wider local audience. You've got folk festivals at The Grove Inn to Punk all-dayers at The Fenton to big old Leeds Festival. It really is pretty eclectic and vibrant in Leeds. It doesn't seem to just follow trends, rather dip its toes into everything which is great for music lovers.

Matt: StrangeForms, Gold Sounds, Slam Dunk Festival, World Island and any number of all-dayers/weekenders that regularly pop-up are great in that they tend to know their audiences really well and without being too niche they attract a cosy, knowledgeable crowd. Yet also they tend to have a nice way of hooking in people who just want to explore things musically too. Basically many of them simply have a real knack of putting on great, inclusive events…

Martin: Just outside of Leeds, Long Division run buy WakefieldBID is a top music festival just on the door step. World Island is bringing some cutting edge music to some derelict land on Leeds’ new South Bank development. Inner City Electric is happening in June too, the first one which takes the multi-venue format and throws in workshops and learn gin experiences on the day.

Looking at the line-up for Live at Leeds this year, who would you really love to go and watch?

James: Nadine Shah. I've been listening to her most recent album non-stop recently. It's an absolutely amazing record and really inspiring. She'll be Holy Trinity Church at 21:30, so I'm gonna leap off stage and bolt down there straight after we come off stage. Fingers crossed I'll catch the end of her set. You should go!

Matt: Two headliners… The Horrors (as their last album has been steadily building into an oft-played shop favourite), Nadine Shah (as her album is a shop fave) and IDLES (As we need them more than ever in these times), Locals like The Orielles, Cabbage, Cat Una, Krrum, are always worth it and some wild cards like Partner, Lilla Vargen and Amaroun, who I’ve heard but would like to check live.

Martin: Magic Mountain are a bit of a super group, [with members of] Pulled Part By Horses (but not the one in this chat! - Ed), Menace Beach and Grammatics. They recently released a single on Leeds singles label Come Play With Me. British Sea Power are a fascinating band too.

What advice would you give to punters heading to Live at Leeds for the first time this year?

James: Get there early and if you're waiting for a certain band you wanna see for a couple of hours, just pop in a random venue and check some new stuff out. You might find something totally amazing!

Matt: The best thing about Live At Leeds is that you can spend the day exploring, so why not check out their website and go see some bands you’ve never seen before. LAL has such a diverse line-up and this year in particular there’s a great gender balance too so why not dive in, check out new artists and venues you’ve never been to before. In the words of Lonnie Liston-Smith ‘Expand Your Mind’. Also don’t peak too early, with so many great drinks on offer it’s easy to get caught up in the moment and be blitzed by 3pm. Make use of the great places to eat in Leeds and pace yourself!

Live at Leeds takes place on 5th May and DIY is an official media partner. Tickets are on sale now. Visit diymag.com/presents for more information.

DIY will be hosting two stages at Live at Leeds this year: Pale Waves, Anteros and Whenyoung all play at the Brudenell Social Club, while Cosmo Pyke, Sorry and Suzi Wu play the Brudenell Community Room. 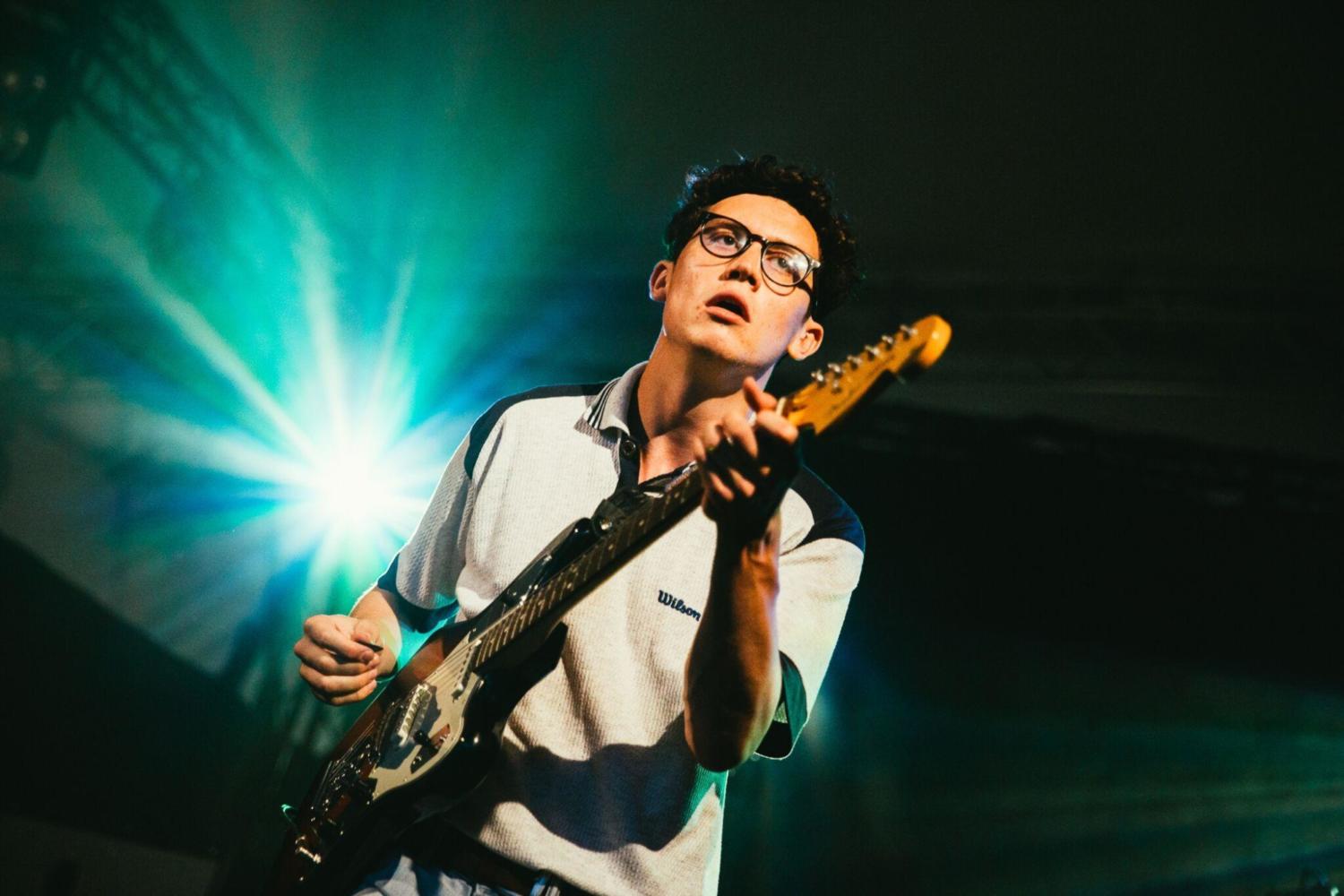 The Magic Gang, Pulled Apart By Horses and more are set for Live At Leeds 2018

Ten Tonnes, Sorry, Her’s, ALASKALASKA and loads more have been added to the line-up.