Julia Jacklin releases new album ‘Crushing’ today, a triumphant collection of tracks that makes both a moving and complex listen. After teaming up with her pals in Phantastic Ferniture for an album last year, ‘Crushing’ is her second full-length record, following her 2016 debut ‘Don’t Let The Kids Win’. Produced by Burke Reid, it features the tracks ‘Comfort’, ‘Body’ and ‘Pressure To Party’.

In our review of the record, we wrote: “Unpacking messy feelings over delicate guitars, ‘Crushing’ may have been born from a place of confusion, but Julia Jacklin’s voice sounds clearer than ever.”

Listen to the album in full and read Julia’s track by track guide to the record below.

Opening tracks are always hard to choose but this one felt right immediately. I wanted to draw people in slowly and not try and win attention with something short and to the point. It’s a long narrative that takes a few twists and turns. I guess in the end it’s a bit of a resignation to the current state of things. A song written about the times you’re just not up for the fight. That maybe society won’t ever fully respect women and their bodies. And sometimes even when you walk away from something bad you’ve already given them too much that you’ll never fully get it back.

A few people have commented about it being the first song they’ve heard that references revenge porn. And yeah, I guess today a lot of our relationships are conducted online. Young love is so beautiful and sacred and that trust you put into someone is so special at the beginning. Society likes to shame women who have participated in sharing intimate photos with someone they trusted at a time they were in love without holding the men who received those photos, broke trust by sharing them and most likely sent some of their own to account. It’s so transparently sexist, old fashioned and boring as hell.

This feels a bit like the antidote to the previous track. This one came together over a period of time where I just felt like the walls were closing in a little, I guess. Couldn’t remember the last time I had a moment to myself and I was realising how complacent I had become in my own life in terms of asking for space. Once you start letting a few things slide it can snowball. What you’re willing to put up with, what you feel like you deserve from the people in your life. It’s nice to get to a point in life where you can have nuanced conversations with your partners/friends/family. Where everyone cares enough about each other and isn’t clinging so tightly to their ego that you can say, “hey, you know I care about you, but this behaviour is not okay” and they listen, adapt and stay.

This is just a three minute frustration song about the pressures of correct post break up behaviour. I think that what makes break ups so difficult sometimes is because everyone has been through it in someway, nobody has too much time for your weird, struggle through period. The time where you act strange and drink too much and say the wrong things and act out of character. Spending all this energy, ‘getting back out there!’, standing in a crowded room trying to enjoy yourself, surrounded by all these people who remind you of them. Everyones got their own story of break up pain that yours can get very quickly lost in the noise.

Don’t Know How To Keep Loving You

I wrote this basically staring out the window one day in the tour van. I have always loved Fiona Apple's ‘Not About Love’ and this is in that vein thematically I think. There’s not heaps of songs out there that cover the sadness of falling out of love, how powerless it can make you feel and then knowing you need to leave. That character doesn’t get as much sympathy as the one who has been left, so it’s a harder perspective to write from.

When The Family Flies In

Hard one to finish, some things are too sad to write songs about but I tried. First time on piano, I had a bit of a mild meltdown in the studio and Burke the producer suggested we try piano instead of guitar. I was very hesitant, I don’t play piano and I don’t have a very good piano imagination so it just sounded very early days Delta Goodrem in my head. But Burke mic’d it from far away and muted the keys and recorded the inside of the piano so it didn’t sound clean at all. We kept all my breathes and sighs in and I think it worked well with the subject of the song.

This came from a few different places. Probably the only song influenced by current politics. I remember sitting in my mum's kitchen listening to the radio and they were streaming the Republican Convention when Trump had just been announced as the Republican Presidential candidate. I just remember this feeling of dread even though I didn’t think he would win. I just thought, oh please don’t give people like this a microphone, a platform when there are so many other voices from people that have actually done the work and have important, hopeful, helpful things to say that need to be amplified and listened to.

Well, look how that turned out, hey? Just made me think of all the times I had to listen to some man explain something to me I already knew, or give me advice I didn’t need or assume I didn’t know what I was doing. How so many times the “expert” in the room knows less than the people being forced to listen.

I really love this song, wasn’t sure about putting it on the record because I worried that it was too simple and maybe a bit too submissive. But over time I’ve realised it’s not submissive at all to me; it’s quite the opposite. I guess it’s a song for deep lovers of ‘The Notebook’ who also use Tinder.

I wrote this song on the couch watching Dawson's Creek with my brother. We have it on DVD and always mute the opening theme song after they changed it from the great ‘I Don’t Want to Wait’ by Paula Cole by to ‘Run Like Mad’ by Jann Arden after season one. A great tragedy. Anyway the muting helped this song come together.

This one was a real difficult one to get right in the studio. It took many forms and we recorded it about four times. It made me feel very vulnerable as a singer. It still does when I sing it live - I’ve never felt that exposed. There’s something I find quite embarrassing about it, how much I have to deliver the middle section, it can’t really be done half-heartedly. Gonna be interesting touring it for over a year!

I wrote this song in a sharehouse I was in for a few months after I finished touring the last record. It was a pretty lonely time and I just needed this song I guess. I sent it to a few friends who I felt might also need it and it was just a nice one to write that felt useful. Songwriting doesn’t often feel like a useful trade. It was nice to not be motivated by having to fill an album or anything, just motivated by pure emotional need.

'Crushing' is out now via Transgressive.

The track is taken from the recently-released ‘Crushing’.

It’s the third preview of debut album ‘Beware Of The Dogs’, out next week. 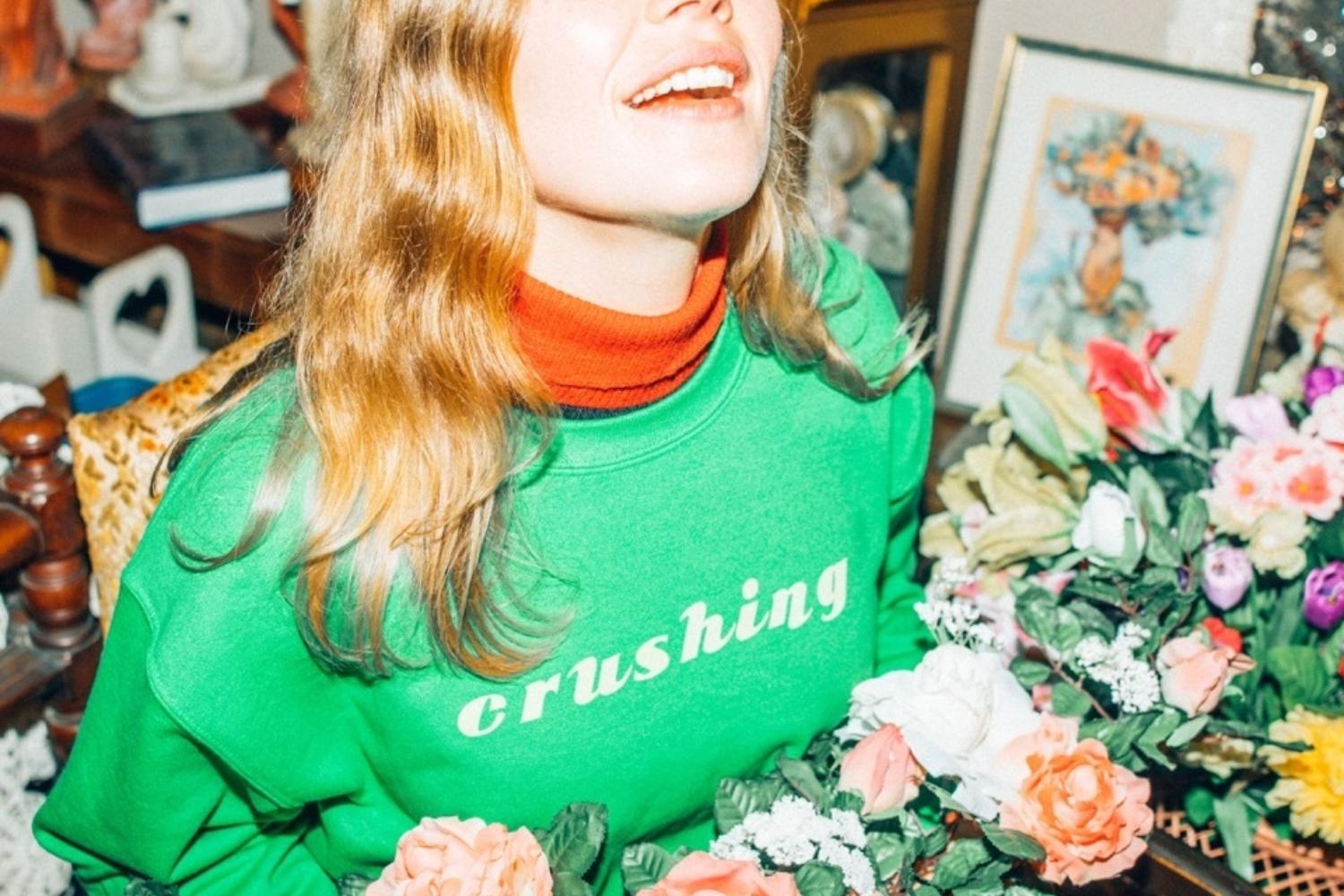 Her voice sounds clearer than ever.