Since first emerging in a torrent of energy and life, bounding, platform-clad, down the stairs of a King’s Cross hotel, it’s been a rollercoaster journey for Scary, Sporty, Ginger, Baby and Posh. Over the years, the original five-Spice recipe has fluctuated - first with Geri Horner (nee Halliwell) leaving the band at the height of their fame; now with Victoria Beckham opting out of their current second reunion tour. But, despite the varying number of Girls, the magic at the heart of the band – the genuine feeling of camaraderie, sass and chutzpah that made them icons and role models for a generation and beyond – has remained impressively intact. Unlike, say S Club 7, whose dwindling number seems only to point to its remaining members (three, at last count) milking an already-dead cash cow for its final few club-circuit tour pennies, each time the Spice Girls have come back together it’s seemed to be borne from a still-present love: for each other, their fans and the once-in-a-blue-moon legend they created.

Bursting into Wembley Stadium for a three-night, sold out run (that’s nearly a quarter of a million tickets FYI), the assembled hordes that giddily make their way to the enormous pitch tonight are almost uniformly clad in ’90s merch, varying degrees of Spice costume and three cans of G&T deep; the love here is strong. With a huge Daily Planet-esque globe that dominates their set emblazoned with a rotating message declaring that “All ages, races, genders, sexual orientations and abilities are welcome”, the whole vibe from the off is of inclusivity and unity; if the Spice Girls were always about love and solidarity – between women, between communities – then, with every rainbow-coloured glitter explosion and cover of ‘We Are Family’, they’re going full pelt into the message tonight.

Yet, for the first time, there’s something a bit off. Mel B and Emma still spend half the set joking around, patting each other on the bum and spontaneously hugging (they’re the two you most want to head down the pub with), while Mel C is still the biggest pro, her affability mixed in with a steelier determination. But, while Posh’s absence is noted briefly and shrugged off – the whole world, after all, knows she’s got her own empire to run these days – it’s Geri that’s the heartbreaker here.

It’s difficult, of course, to maintain or at least translate the characters the five first emerged with 25 years ago as barely twenty-somethings to the versions of themselves that they stand as now, as affluent, wildly successful mothers in their mid-40s. And yet Baby, Sporty and Scary gamely camp it up, donning outfits true to their old personas, high-kicking and pissing about like the good old days. Though Mel B probably wouldn’t choose to sport a leopard-print bodysuit in her everyday life, you get the sense she and the other two are having an absolute blast reliving the past. Ginger Spice, with her princely bum-pinching and Union Jack mini, was arguably always the biggest character, a brilliantly gobby hustler from Watford who inspired a legion of devotees not to give a fuck what people thought and to follow your heart. And so there’s something genuinely gutting about her tonight, as she totters out in a floor-length, corseted regal gown – a nod, you assume to the Union Jack number, but with all the joy and playfulness stripped away – awkwardly performing the routines, but never really embodying them, like a stiff chess piece being moved around the stage.

There’s the sense that Geri, now comfortably settled in her country pile, does not want to be that brash, brazen version of herself anymore, which is understandable, albeit sad, because what the other three prove tonight is that you can still grow up without losing that special Spicey spark. And, as they cavort round the stage, making jokes about Mel B’s sex life, pretending (are they?) to do shots at the start of the ‘nightlife’ section and throwing out the odd swear, it looks a lot more fun from where they’re standing. 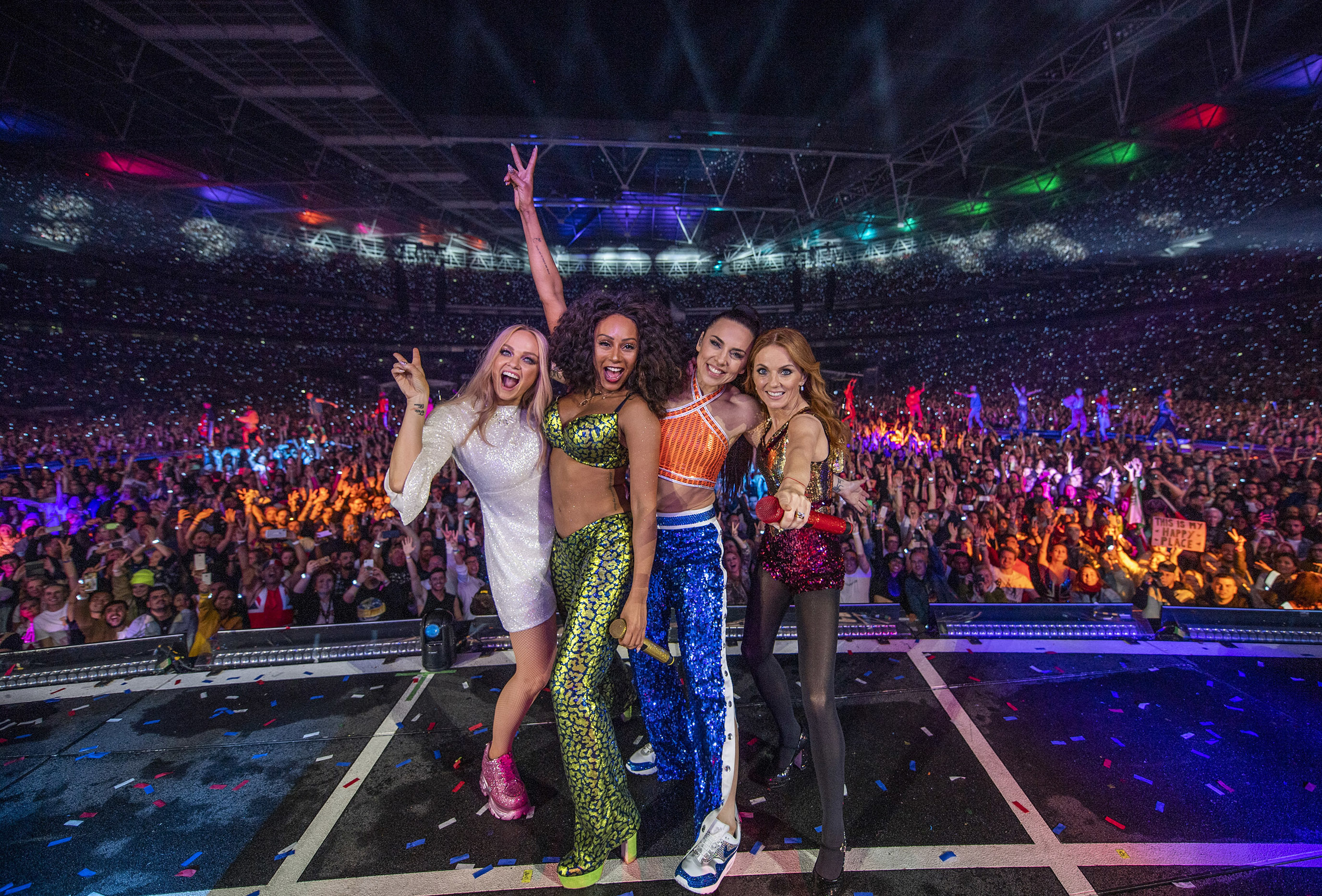 On stage for nearly two hours, with every no-expense-spared whistle and bang you could hope for (Butterfly confetti for 'Viva Forever'! Entire ballet scenes! Explosions after basically every song!), tonight's show is every bit the grin-inducing nostalgia fest that a Spice Girls show should be. There's all the hits, of course, from the opening bang of 'Spice Up Your Life', through the 'oh shit, that was actually really good' reminder of Pepsi commercial offering 'Generation Next' to the weepy 'Too Much' and more, plus a few misses (does anyone ever need to hear 'Holler' again?). But the best bits are when they strip back all the excess of their relative teams of dancers - split into individual 'houses', and just sit and chat. Sure, their reminiscences about their first meetings might be scripted, but there's still something magical about seeing that particular group of people, with their oh-so-familiar voices and their oh-so-familiar tropes actually there, on a sofa, IRL, rehashing these 80,000 people's childhoods. If there's a dry eye in the room when they roll a stripped back VT about what it means to be a Spice Girl before the encore, then the crowd is far less pissed than you'd guess.

They end as they began, in Buffalo shoes, busting out 'Wannabe' – except this time, instead of a bunch of young hopefuls who could never have guessed what they were about to step into, they're commanding a stadium full of people who probably all owe a little bit to their legacy. Is it perfect? No, but then hey, the Spice Girls were always about something a little more human than perfection. 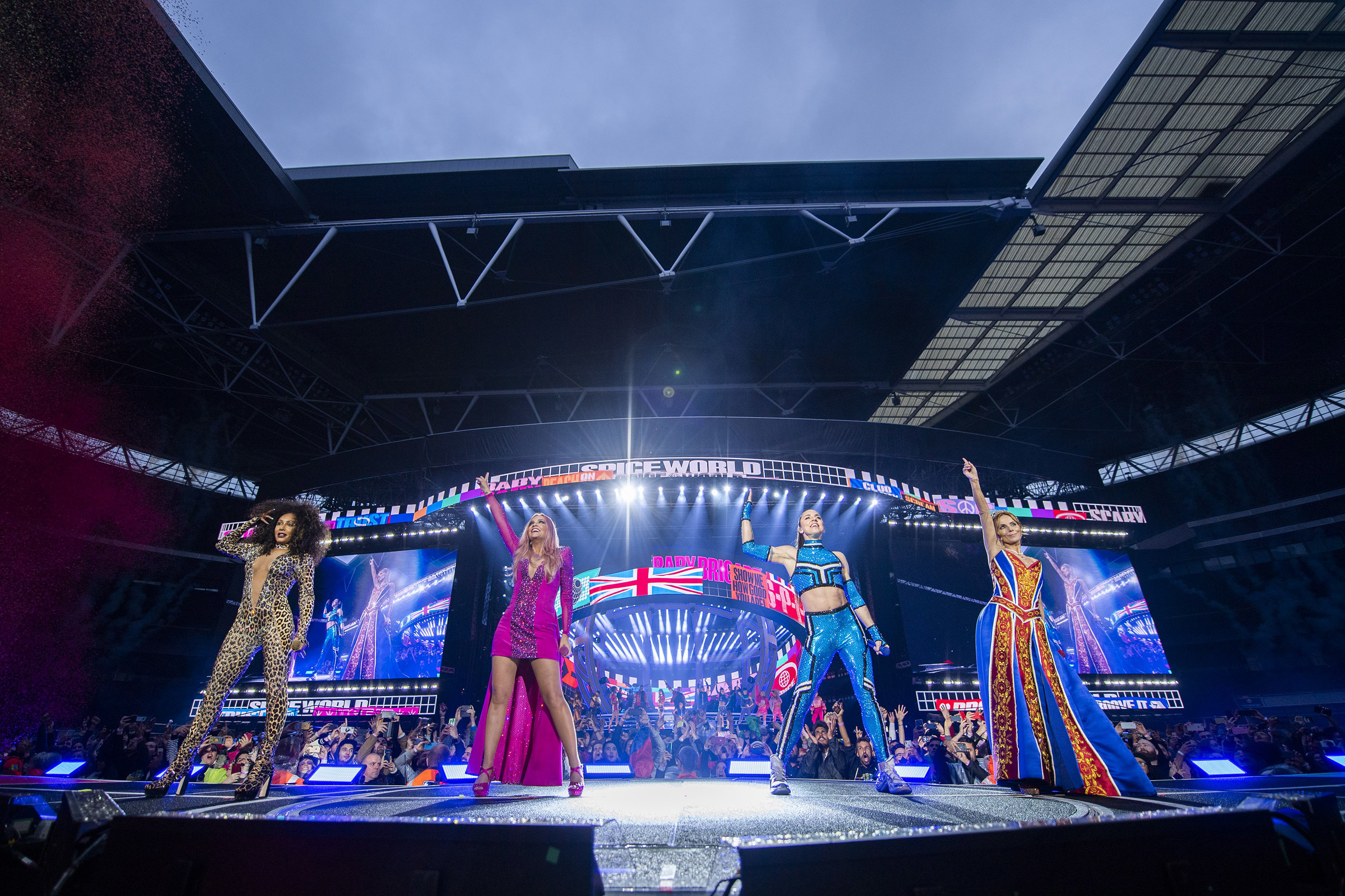 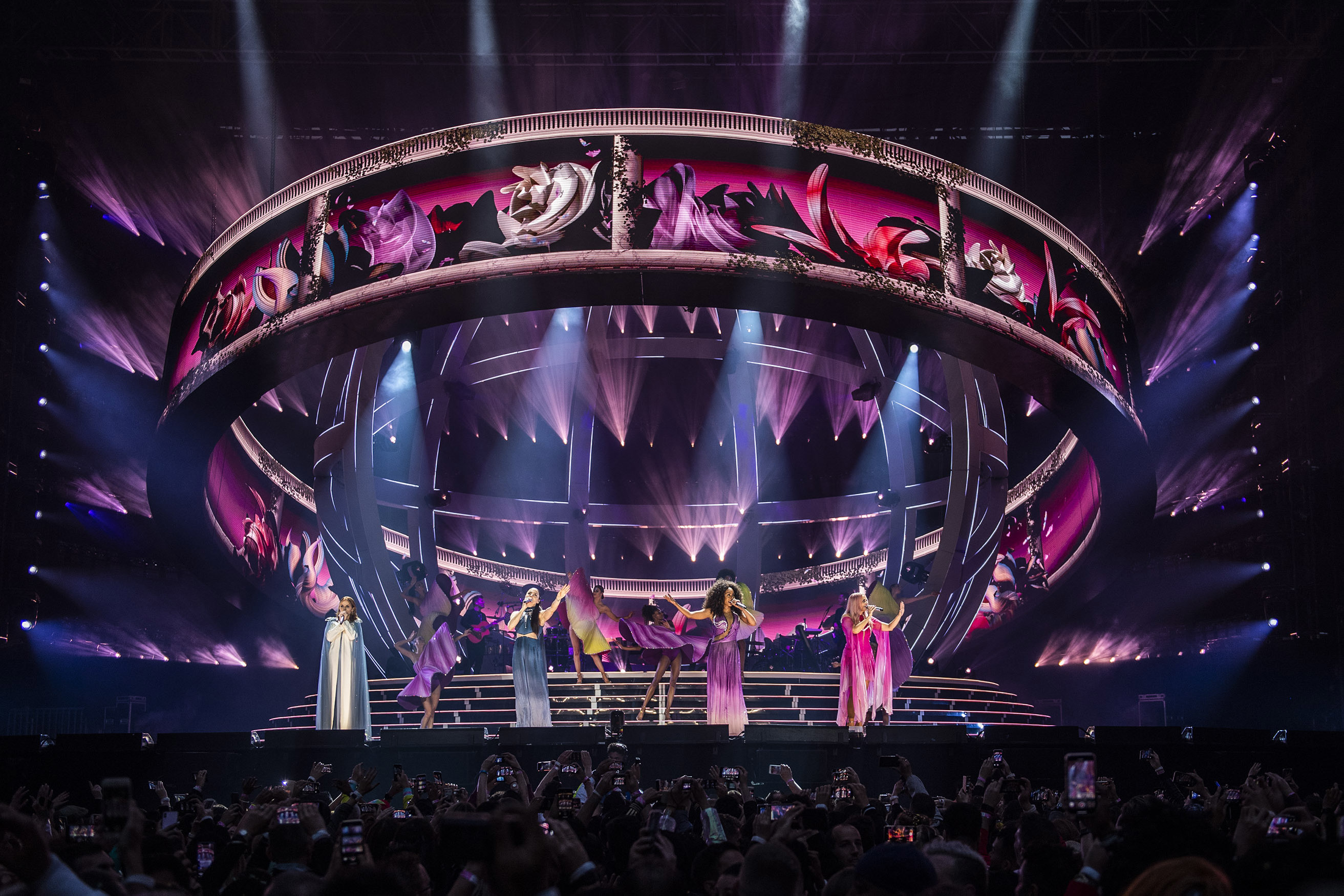 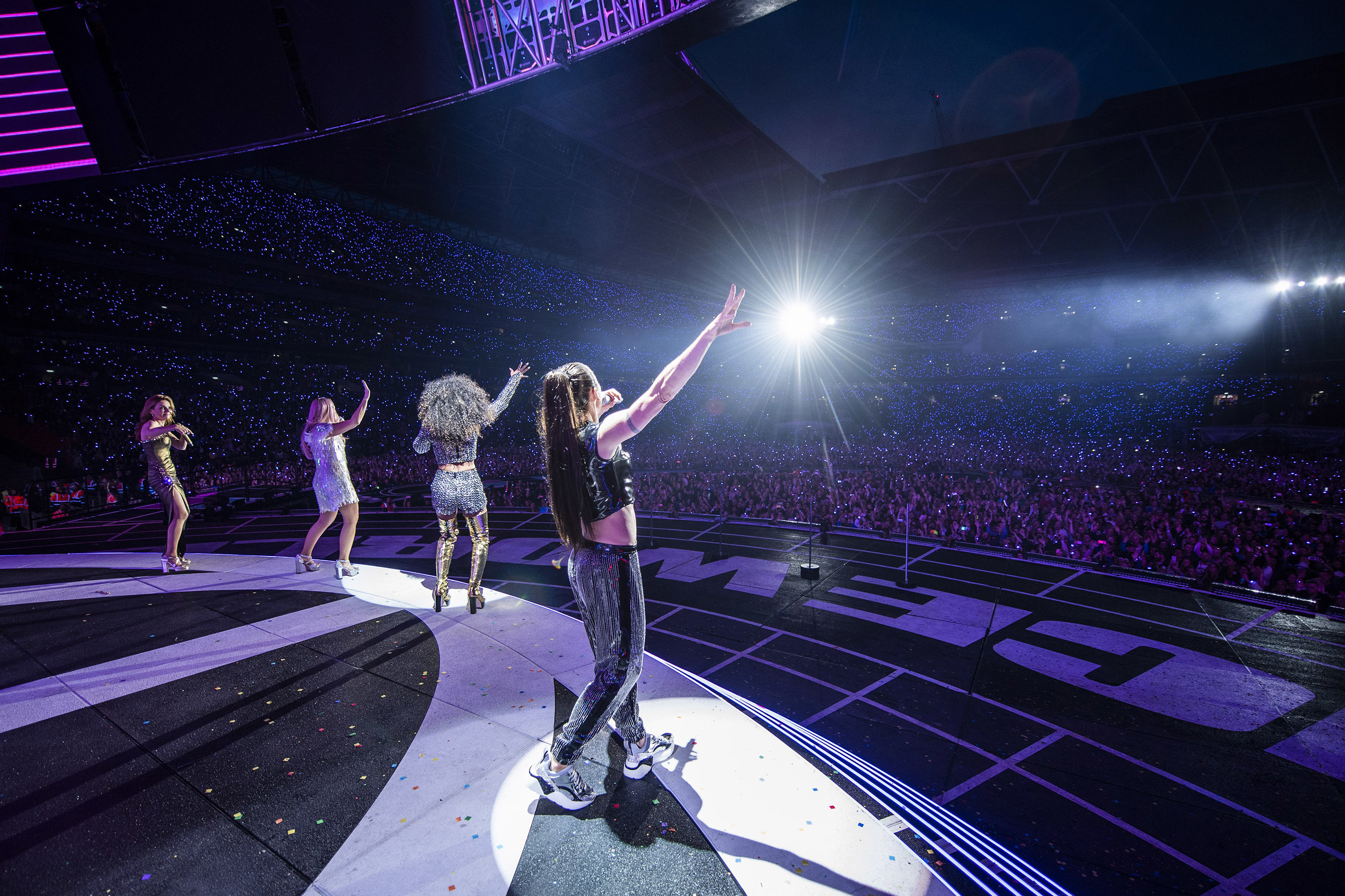 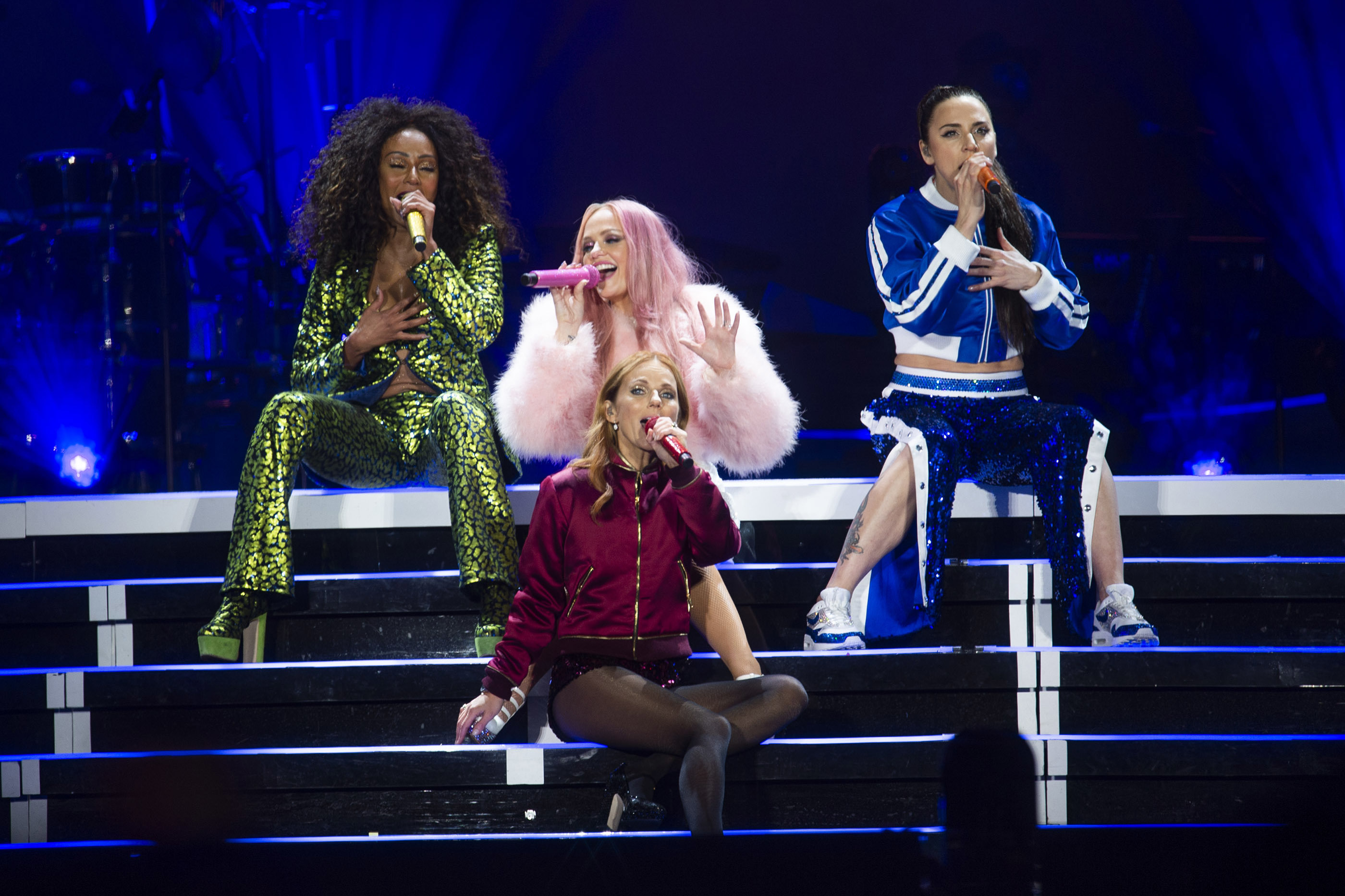