To record their new album ‘Beneath The Eyrie’, Pixies lived and worked for three winter weeks in a deconsecrated 19th Century church in the tiny town of Hurley, deep in the New York countryside. Outside the church’s doors lies the gorgeous sprawl of The Catskills, almost 3,000 square kilometres of mountains, woodlands, rivers and winding natural paths. There were no friends or family, no visitors or hangers on, only isolation and the album at hand on which they could focus. Perhaps, given its background, it’s no surprise that the new record sounds so richly Gothic. There are curses, witches, drownings, beheadings, crucifixions, cracked bones and a killer catfish among its shadowy procession of images, which are whispered, growled and howled by Black Francis over some of the darkest and dizziest instrumentals the band has ever produced.

But then again, there’s always been a touch of the macabre in the frontman’s writing. Part of the reason that albums like ‘Surfer Rosa’ and ‘Doolittle’ are now regarded as all-time greats is the extreme sense of otherworldliness that the band conjure, a heady blend of obscenity, wit, seediness, surrealism and violence that’s unlike anything any other band has done before or since. Their music is not quite of this world, which is why it’s a little unusual that, for ‘Beneath The Eyrie’, they let listeners behind the curtain for the first time, documenting the sessions in a podcast diary which breaks down their craft to its fundamental pieces.

“You know, would an artist of my generation especially like to stay mysterious? Yes, of course. But if I was so committed to that idea of mystery and being anonymous, I wouldn’t be talking to you, right?” says a combative Black Francis on the phone from his Massachusetts home. “Basically, someone has got to pay for my recording, and my manager called me and said, ‘Hey, we might be able to pay for your record if you guys do a podcast documentary. I’m not going to compromise my music, even though some people think I might, and I’m not going to have some beer company splash their logo all over my stage, so I said, ‘Eh, alright. Sure.’ I just wanna play in a band! I don’t wanna work a different job, I don’t wanna unload trucks or run a bar. I don’t wanna go back to college and learn how to do some other job.”

The band originally tried recording the podcast themselves, but as he puts it, “our aesthetic was not very mainstream.” Eventually, they invited journalist Tony Fletcher to document the three weeks of recording. “It’s not very weird. If I had my way it would be a lot weirder and a lot more left of centre,” the frontman says of the result, a hint of disappointment in his voice. “But I get it! Would I sit down to watch a documentary about something and walk out just because it’s trying to accommodate a larger audience? We don’t want to be boring, but it seems like there’s enough of the personal in there. There’s enough verité there going on that I think they’ve done a good job.”

On the podcast, producer Tom Delgaty calls the Dreamland Studio ‘a safe haven from the black bears and the witches’, but Black Francis is reluctant to draw an obvious parallel between the record’s American Gothic aesthetics and the way it was recorded. “We did mention before we even picked that studio that we thought there might be a gothic tone or gothic mood or whatever with the music, but it was never like, ‘Wait! Do not proceed any further, it’s not got enough of a gothic mood!’ It’s kind of like IF something shows up and it seems a bit gothic, we’re gonna try and tease it out. But that wasn’t what we set out to do in some kind of blueprint. That isn’t really our style.”

“Would an artist of my generation like to stay mysterious? Yes, of course.”

There’s a sense that it’s not really ‘Black Francis’ who’s giving this interview - that wild and untameable alter-ego that’s led Pixies through a searing career - but the pragmatic man behind it, Charles Thompson IV. “I think I’m pretty square, no one seems to be very afraid of me. My children sure aren’t…” he sighs.

There’s a point in the podcast when, recording one of the album’s most nightmarish songs, ‘Catfish Kate’, Delgaty calls on him to ‘access’ Black Francis to start ‘selling’ the narrative, clearly eager for a bit of his trademark melodrama. “Sometimes I might be trying to do something deliberately flat and bland, a Mick Jones ‘I don’t give a fuck’ kind of thing, but people are always like, ‘Oh, come on, give us a little bit of the ol’ Black Francis!’ Basically they’re saying, ‘You’re boring me right now, this is not interesting enough. Be more interesting.”

However reticent Charles is to bring him out for an interview, Black Francis has served Pixies well, both on their original run of classic records that ended in 1991, and their enviable run of post-reformation LPs. Their new records showcase remarkable creative consistency, and prove Pixies still every ounce as relevant in the fourth decade of their career. The singer acknowledges, however, that they’ve not been without backlash after founding member Kim Deal, in some ways the cool Yin to Francis’ feral Yang, departed before the release of comeback LP ‘Indie Cindy’. There is, undeniably, a sizeable ‘not the Pixies without Kim’ brigade amongst their fanbase. Does he think there’s too much made of the line-up change?

“Some people probably do [make too much of it] but it’s their right to,” he replies. “It would bother me if no-one came to my gigs, and no-one listened to my records any more, but that hasn’t been the reaction. We’re still playing the same venues, bigger venues than ever actually. At some point, when the line-up thing starts to get really dogmatic, like some sort of religious order that we’re fucking with, that level of discussion, it’s like, ‘Whatever man, where are we going for lunch? At some point I just don’t give a shit. It’s one body of work, not two different bands.”

Francis views Pixies’ sizeable legacy with a sense of almost intense self-awareness. “I’m glad if someone says you’ve got legacy. I’m glad if someone punches a hole in that and says, ‘Whatever. You wrote a couple of good songs, you’re not so hot’. I like that too!” he claims. “And I’m not trying to like, rationalise my own work and say, ‘I’ve got A list and B list’, but whatever, we do! We have an A list and a B list!”

Though it’s admirable that the band keep pushing forwards with new records, they’ve undeniably still occasionally rested on that substantial A list – previously touring ‘Doolittle’ in full, and recently giving ‘Surfer Rosa’ the same treatment for its 30th anniversary. But for Black Francis, it’s all part of the game. “That’s just how the format has changed,” he says. “Every few years, we do a themed show. Big deal. What do we do 90% of the time? We play a show where we play whatever the hell we wanna play.”

“I think my artistic integrity has remained intact,” he shrugs. “It’s good enough for me!”

Pixies wind back the years at London’s Roundhouse

It’s been 30 years since the release of these two iconic records, but Pixies still know how to conquer. 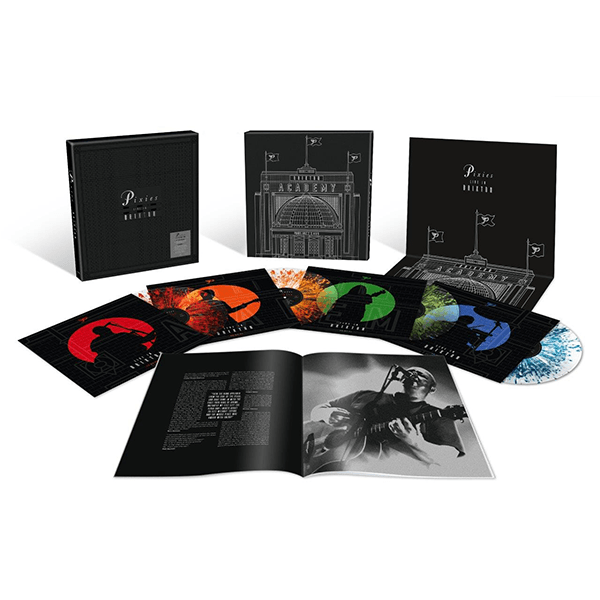 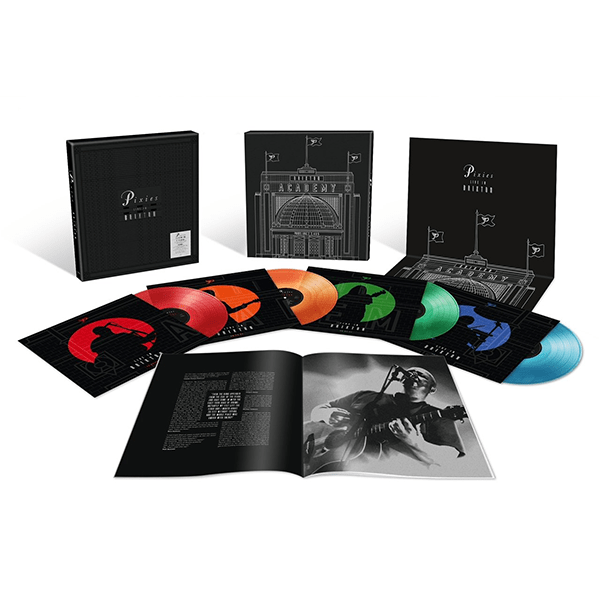 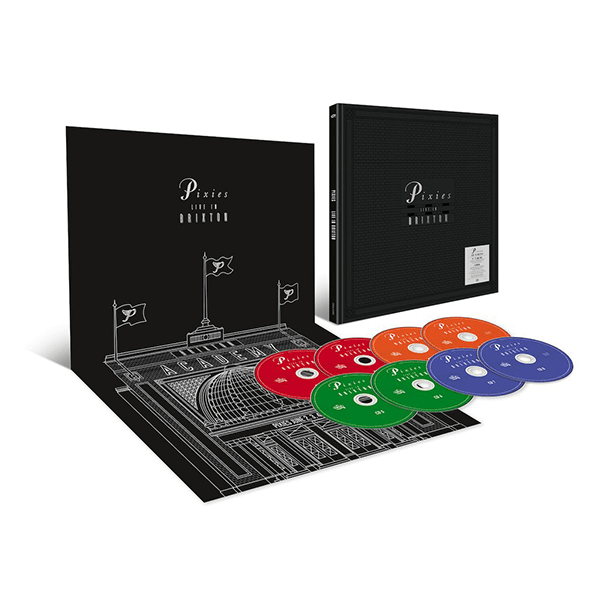 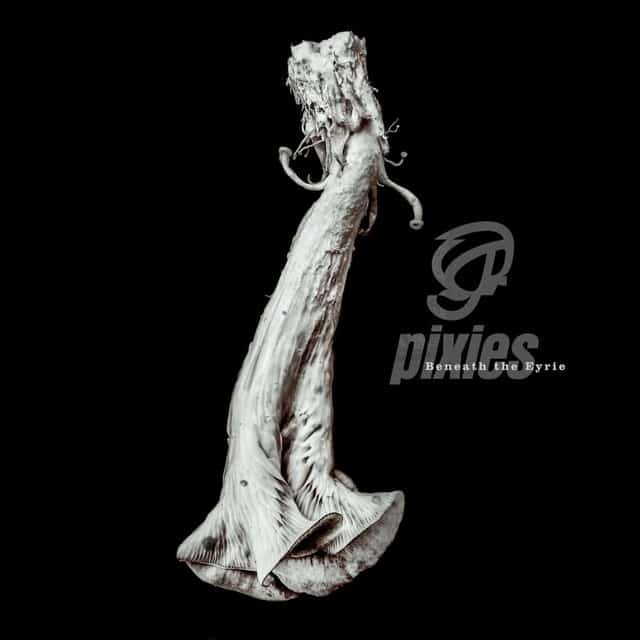 Pixies - Beneath The Eyrie Heavyweight LP