In the same week that the UK approves the use of the Pfizer Covid-19 vaccine, Liam Gallagher makes his own contribution to society by debuting a livestreamed gig where he performs on a boat in the middle of the River Thames.

The year is 2020, and the Oasis man has shown no signs of stopping - or losing his relevancy. Donning his signature aviators and performing a selection of favourites from both the revered Oasis back catalogue and his own personal solo discography, Liam’s performance comes at a time when the world at large are seeking comfort in the old and familiar, immersing themselves knee-deep in art that evokes nostalgia. Armed with his maracas (and tambourine) and his trademark pose - hands behind back, tilting his head upwards as he sings into the microphone - it’s a welcoming sight as any.

This isn’t any old set. Pre-recorded and filmed with his band performing live on a boat as it makes its way down London’s River Thames, the glittering, urban backdrop of the city is captured beautifully. The location is hundreds of miles south of Liam’s native Manchester (though he still cheekily has a Manchester City flag as part of his stage set-up), but the setting, lit up by the dazzling lights of the city as the night settles in, makes for something ethereal. 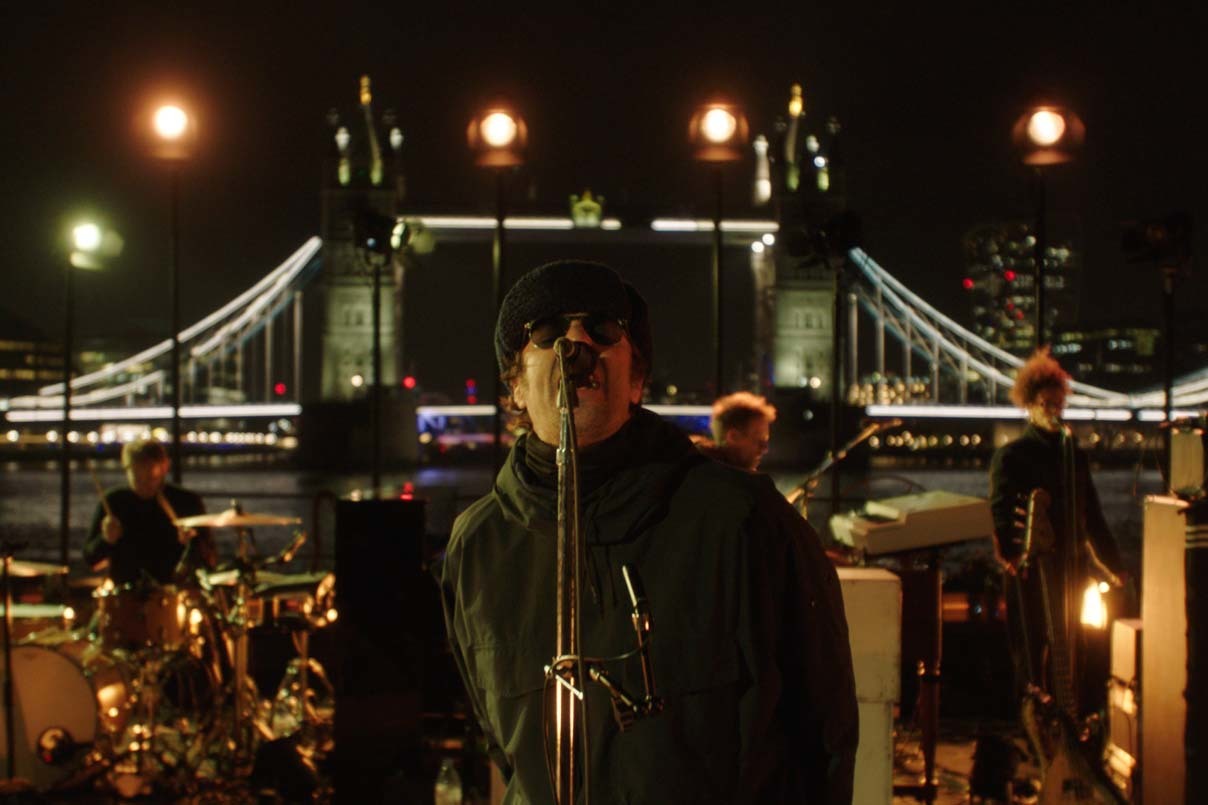 The younger Gallagher does not waste too much time with any pleasantries (why would he, when there is nobody in attendance), but the lack of passionate audience members does nothing to take away from the energy of the performance. Opener and Oasis mainstay ‘Hello’ starts the set off memorably, the setlist alternating between cuts from his solo records ‘As You Were’ and ‘Why Me? Why Not’, and more familiar oldies.

Iconic favourites from yesteryear such as ‘Columbia’ and ‘Fade Away’ are teased through a drip feed across the night amid solo tracks ‘Shockwave’ and ‘Greedy Soul’, with Liam saving the ultimate gems for an iconic set-ending rush of ‘Morning Glory’, ‘Cigarettes and Alcohol’, ‘Headshrinker’, ’Supersonic’ and ‘Champagne Supernova’.

“Couldn’t give a fuck about you, big round thing,” he sneers at the London Eye in his Northern twang as the boat makes its way past the South Bank. “Fuck off. Too round.”

Watching Liam you almost forget what it’s like sweatily screaming “How many special people change? How many lives are living strange?” in unison with thousands of strangers in a massive field until your voice is hoarse, clutching a pint of Amstel in your hand and finally understanding that live music is the reason for truly, truly living. Almost.

He’ll also be playing a massive show at Knebworth Park in June 2022.

The new visuals are described as “‘Imagine’ meets ‘It’s A Wonderful Life’.”