It’s that time again, dear readers, and for one week only we mean a Wonderful Christmastime. We’ve rounded up the great and the good from 2020’s glut of new festive numbers, from Phoebe Bridgers’ take on Merle Haggard’s ‘If We Make It Through December’, Beabadoobee’s ‘Winter Wonderland’, 100 gecs’ original ‘Sympathy 4 the grinch’ and many more. Grab a mince pie and read on…

Phoebe Bridgers - If We Make It Through December

Continuing an annual tradition, Phoebe Bridgers’ charity Christmas track this year is a cover of Merle Haggard’s ‘If We Make It Through December’ raising funds for Los Angeles’ Downtown Women’s Centre. Also, now-traditionally for the singer, this is not one full of festive cheer. Instead, the soundscape is mellow, Phoebe regaling the tale of a family laid off of work and struggling; fitting for the volatility of 2020. All encompassing, the track possesses a dream-like sparsity, dressed solely in haunting piano; pulling listeners focus towards her raw and unfiltered vocal. With ghost-like harmonies drifting in and out of earshot, it’s Phoebe as compelling as ever. (Flo Stroud)

Kicking off with a festive string arrangement and woodwind trills, Beabadoobee’s take on ‘Winter Wonderland’ soon gives way to an acoustic guitar and her trademark airy vocals; you can almost hear her smiling as she makes her way through the track. It’s warm and cosy, capitalising on a vintage Christmas sound, an unsurprising choice considering the artist’s usual nostalgia-washed guitar music. With a woozy orchestral instrumental section, her cover is fit for a Disney film, bringing to mind snuggly Christmas evenings at home and snowy walks – an ideal soundtrack for activities we’ll all be doing a lot of this year. (Eloise Bulmer)

We all love a Christmas surprise, and glitch-pop’s hottest duo 100 gecs provided this year, dropping their completely mad festive single ‘Sympathy 4 The Grinch’. As brilliantly bizarre as you would expect a gecs Christmas track, it’s an adrenaline fuelled electro-pop smash, complete with jingle bells of course, all about fucking over Santa after not getting an Xbox. You love to see it. (Elly Watson)

James Blake - In The Bleak Midwinter

From his rendition of Don McLean’s ‘Vincent’ to his new ‘Covers’ EP, James Blake is a marvel at swapping his signature glitchy sound for haunting stripped-back takes on other people’s songs. His rendition of ‘In the Bleak Midwinter’ is exactly what you’d expect: crippling, delicate and beautiful. Like the crispest Christmas morning. Layers of his vibrato settle on gentle synths for a soundscape fit to warm even the bleakest of midwinters. 150 years after it was written, it’s ‘In the Blake Midwinter’ now. (Will Strickson)

Porridge Radio - The Last Time I Saw You (O Christmas)

Season’s greetings from Dana Margolin and co. Or, perhaps not. Opting to subvert the traditional end-of-year optimism, the Porridge Radio vocalist has described the group’s latest as “about having a miserable time at Christmas”. Charming. Though this year, the band’s wearied playing and Dana’s fatigued “It circles around again, it always starts again” articulate the sensation that has defined a numbing nine months. It might not be the Christmas song we want. But it’s undoubtedly the one 2020 deserves. (Ben Lynch)

The Cribs - Christmas (All Year Long)

This isn’t strictly first Christmas song The Cribs have produced - that title would probably go, instead, to ‘Glandular Fever Got the Best of Me’, a bonus track from ‘In the Belly of the Brazen Bull’ that recalls a spell with the disease that Ryan Jarman had over the festive period as a kid. ‘Christmas (All Year Long)’ is much more in the spirit of the season, however; a breezy, pop-punk romp in the vein of last month’s outstanding comeback LP, ‘Night Network’. Talk about ending the year on a high. (Joe Goggins)

While most festive tracks come doused in glitter and try to pack in jingle bells at every opportunity, there’s something wonderfully warming about Julien Baker’s more stripped back take on a less in-your-face Christmas offering. A dreamy - unsurprising, really, considering the title - and rich rendition of Perry Como’s ‘A Dreamer’s Holiday’, it’s an understated wintry gem which breathes a whole new life into the original holiday classic. (Sarah Jamieson)

Willie J Healey isn’t content with already having released an album of ‘70s-style balladry this year – he’s now treating us to a vintage-flavoured Christmas song too. But while ‘Merry Christmas’ could quite easily be a discarded McCartney demo, the track is a very 2020 take on Christmas. Santa “is a lady who works on aisle 10,” wrapping presents between her extra shifts - it’s hard to imagine a more painfully relevant image. Still, it’d take a very frosty heart indeed to turn your nose up at Willie’s message of cheer – this year, you’ve got to take goodwill where you can get it. (Louis Griffin)

It says something about Julia Jacklin’s work ethic that this year will be the first since 2015 where the Australian singer hasn’t played a winter UK tour. She has begun to drip-feed new music to tide us over, though, with her latest track a handsome acoustic affair that has her casting her wry lyrical eye over the festive season; the result is a striking portrait of depression, which - whilst ending on a note of tentative positivity - might be the bleakest Christmas song since Rilo Kiley’s ‘Xmas Cake’. (Joe Goggins)

An anti-capitalist anthem; ‘Christmas Is Coming (We All Know The Score)’ is nothing short of a blast at, what front-man Tom Rees has described as, the “grinding nightmare” of consumerism. As inspired by ‘70s glam as ever, and with charged guitars and twangy synths the track is reminiscent of rocking Christmas classics from the likes of Wizzard, Slade and Paul McCartney. (Flo Stroud)

‘Tis the season for Christmas covers, and Baby Queen enters the race with her take on this festive classic. It’s been endlessly adapted so there’s no lack of versions to choose from, but Bella’s take is sure to win over more than a few fans of the track. Wrapped up in synth pads and twinkles, it sounds almost nonchalant, her vocals adding a richness to an otherwise sickly-sweet song. An admirable entry to the Christmas cover collection. (Eloise Bulmer)

With their festive single, ‘Lonely Star (Christmas Song)’, London indie-punk quartet Dream Nails express support for and solidarity with people who find Christmas difficult. It’s a laudable aim, as Christmas songs frequently leave this problematic aspect of the holidays unaddressed. Proceeds from the single benefit The Outside Project, a charity for LGBTIQ+ homeless people. Musically, the song represents a departure from the riot grrrl stylings of their eponymous debut album and blends Motown-style instrumentation with Phil Spector-esque production values. Still, the group’s pop-punk harmonising remains present and prominent. (Greg Hyde)

girl in red - two queens in a king sized bed

Whether sporting a festive jumper or donning a reindeer onesie, for those of us in the northern hemisphere, the holiday season is one for getting as cosy as possible. girl in red’s festive mood takes her under a duvet, with ‘two queens in a king sized bed’ an ode to snuggling up with a loved one. Suitably Christmassy - the plinky piano joined by - what else! - jingle bells, it’s soft and warm in both sound and sentiment. (Bella Martin)

Having released a none-too-chipper album entitled ‘Appalling Human’ earlier this year, it’s no great surprise to learn that Wesley Gonzalez’ take on a Christmas song is more “slurred words” and “painted-on smiles” than merry sing-songs and cosy knitwear. Yet, while ‘Red Man Is Back Again (With a Lonely Dose of Pain)’ lyrically tends towards the despairing (the clue - we’ll accept - is in the title), musically there’s all kinds of deceptive jingles to be found. Wes might be lonely this Christmas, but at least he’s masking it sort-of well. (Lisa Wright)

The Cribs - The New Fellas Cassette 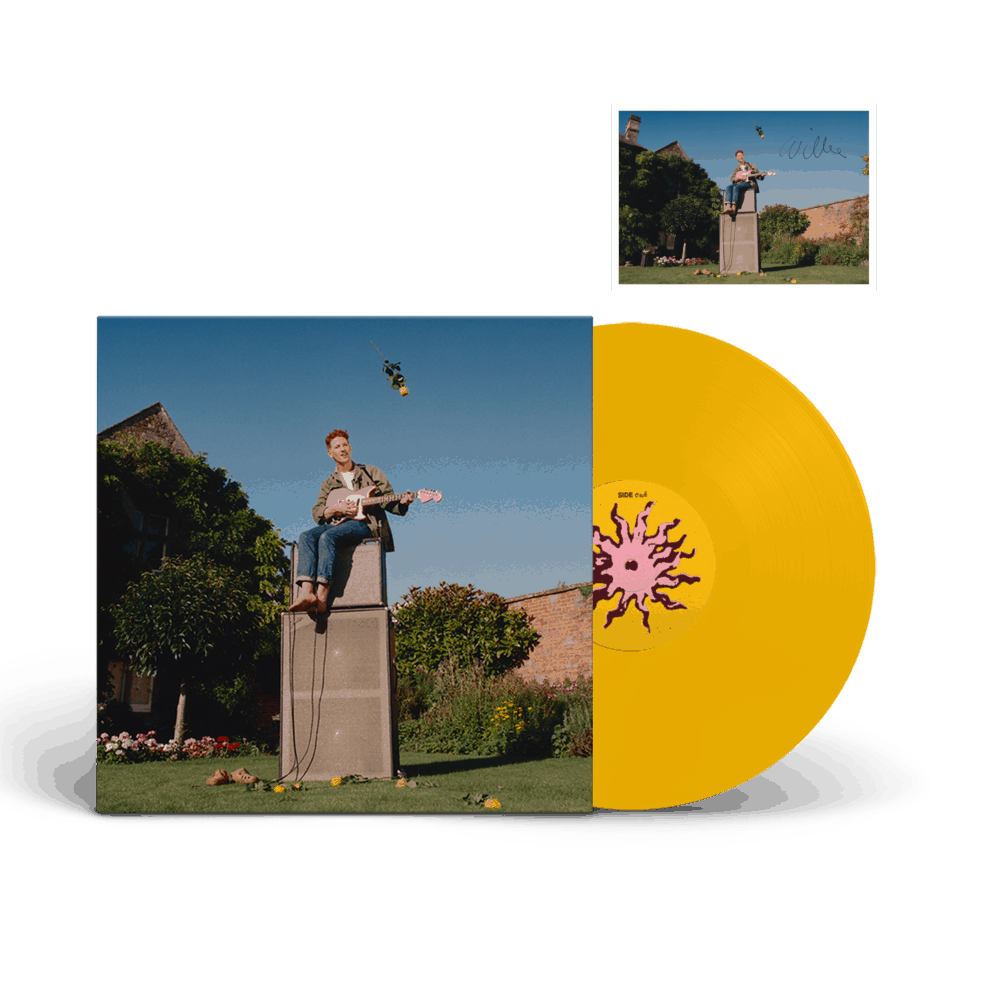