As the four members of Kraftwerk stand motionless behind their brightly lit keyboards looking out across the Tate Modern’s Turbine Hall, there’s a brief moment of silence between songs. ‘Superstar DJs!’ a man next to me shouts, in a broad Yorkshire accent.

Such audacity to actually shout something here feels like sacrilege amid the hushed awe felt in the rest of the venue. This former power plant is their church; we are here to watch in reverential silence.

The man has been in his own private rave for the whole show – but though his yell might not be entirely accurate, the feeling behind what he’s saying rings true. Tonight Kraftwerk are playing ‘The Man-Machine’. It’s one of their masterpieces, packed full of hits (including ‘The Robots’, ‘The Model’ and ‘Neon Lights’). It’s also my favourite Kraftwerk album – and listening to it tonight, it’s even easier to see it as the blueprint for synthpop that it’s often claimed to be.

The eight dates that Kraftwerk announced at the Tate Modern have been imbued with a magical aura. Maybe it’s because people were so relieved they actually had tickets, or maybe it’s because of the wonderful space the shows are in. Whatever the reason, there’s a relief that they more than live up to the expectations.

‘The Man-Machine’ is Kraftwerk’s (synth)pop album. And, tonight, over six tracks and 36 minutes, they recreate their paean to the march of mechanisation and relationship between, er, man and machine in front of a rapt audience (which includes Brian Cox, Jarvis Cocker and Neil Tennant) and bring it to life.

They start, not how we’re expecting, but with the title track which closes the LP - and finish with ‘The Robots’. Throughout it’s remarkable how incredibly they presented this vision of the future and how it still sounds so contemporary now, more than 30 years later.

Ralf Hütter, the one remaining original member of the group, stands stationary in his black lycra suit – except for a wiggle of his leg during ‘The Model’ and a flicker of a smile as he leaves the stage at the end. He’s accompanied by sound engineer Henning Schmitz, live visuals specialist Falk Grieffenhagen and programmer Fritz Hilpert.

It doesn’t really matter who they are though – the performers are subservient to the music. The point has always been it could be anyone on stage – after all, Kraftwerk are nothing if not pragmatic. The stunning 3D visuals that provide movement behind the static members are supremely literal. During ‘Spacelab’ we see a spacelab floaing through space, for ‘Metropolis’ we see a metropolis and for ‘The Model’ we see… well you get the picture.

It’s this level of thought and care they put into the whole package: into the composition, production and in the visuals that makes sure everything works together to create a real humanity. As Ralf Hütter has said: “We are playing the machines, the machines play us, it is really the exchange and the friendship we have with the musical machines which make us build a new music.”

The constructivist art references in the cover art, together with the visuals on the screen, also highlight the fact that Kraftwerk were always an act effortlessly able to use elements of the past at the same time as they were creating new ways to soundtrack the future.

Live, the thing you immediately notice is the thump and force of the sound. The basslines are warmer, the electronic pulses more powerful. More to the point, it’s louder, dancier and more propulsive than on record and there’s improvisation in the compositions.

‘Neon Lights’, the highest of highlights on the album, captures this idea, as neon 3D signs float past and towards us, it sounds every inch the hymn to the beauty of modern life. It starts as a ballad about travelling through a metropolis, with splashes of soothing colour from the synths. Then, they bring the funk – a rolling percussion of electro that warmly rushes over you.

While the venue is full of polite respect, we’ve found ourselves in the corner of the room where people are dancing. There’s no escaping from toe tapping to ‘The Model’ though and it sees the whole crowd at least nodding their head. The fact that it wasn’t a hit until being put onto a single from ‘Computer World’, a full three years later after this record was released, shows the true foresight of the music they were creating.

These dancier elements are complemented by the dreamy, nocturnal electro of ‘Spacelab’ and ‘Metropolis’, which sees them build a drone into a shimmering urban odyssey and makes it sound like every 80s synthpop songwriter owes them royalties.

It ends with ‘The Robots’. The bleeps and robo-electro riff are so sharp they could have been created yesterday and not sound out of place. They take repetition and show how they can be used to create irresistible dance music. “We’re full of energy / We’re dancing mechanic,’ they sing. That it ends tonight reinforces the idea of this album as the most forward looking, visionary and downright catchy album Kraftwerk have produced.

There’s no pause as they charge up again and we get an hour and a half of greatest hits. It starts with ‘Autobahn’. ‘The birth of techno!’ the Yorkshireman shouts, hands aloft.

They play a version of ‘Radioactivity’ updated with a Japanese verse relating to the Fukushima disaster. They play ‘Trans Europe Express’ which packs more of a punch with the stab of its rhythmic beats.

They play ‘Computer Love’ – the Yorkshireman points at the stage and shouts, ‘Bigger than Coldplay!’

The journey ends with ‘Musique Non-Stop’. That all these songs are offered up in chronological order makes the set feel a little uneven and only serves to highlight that the more recent work lacks the texture, power and vision of their earlier work.

Yet, it doesn’t detract from a mesmerising show – one that shows the enduring legacy of the work Kraftwerk have created and their colossal footprint on the world of music.

In 1978 Kraftwerk decided not to tour to support ‘The Man Machine’’s release. This was mainly due to the criticism of its cover art, inspired by the Russian constructivist El Lissitzky, showing the members of the band looking East and appropriated the National Socialist colours.

But it could just as easily have been because they didn’t think people were ready. The record showed how modern ‘pop’ music could be (and was to be) in the future. Tonight’s performance is a spellbinding 3D-spectacle and showed that, even 30 years later, people are still trying to catch up. Just ask the Yorkshireman next to me. 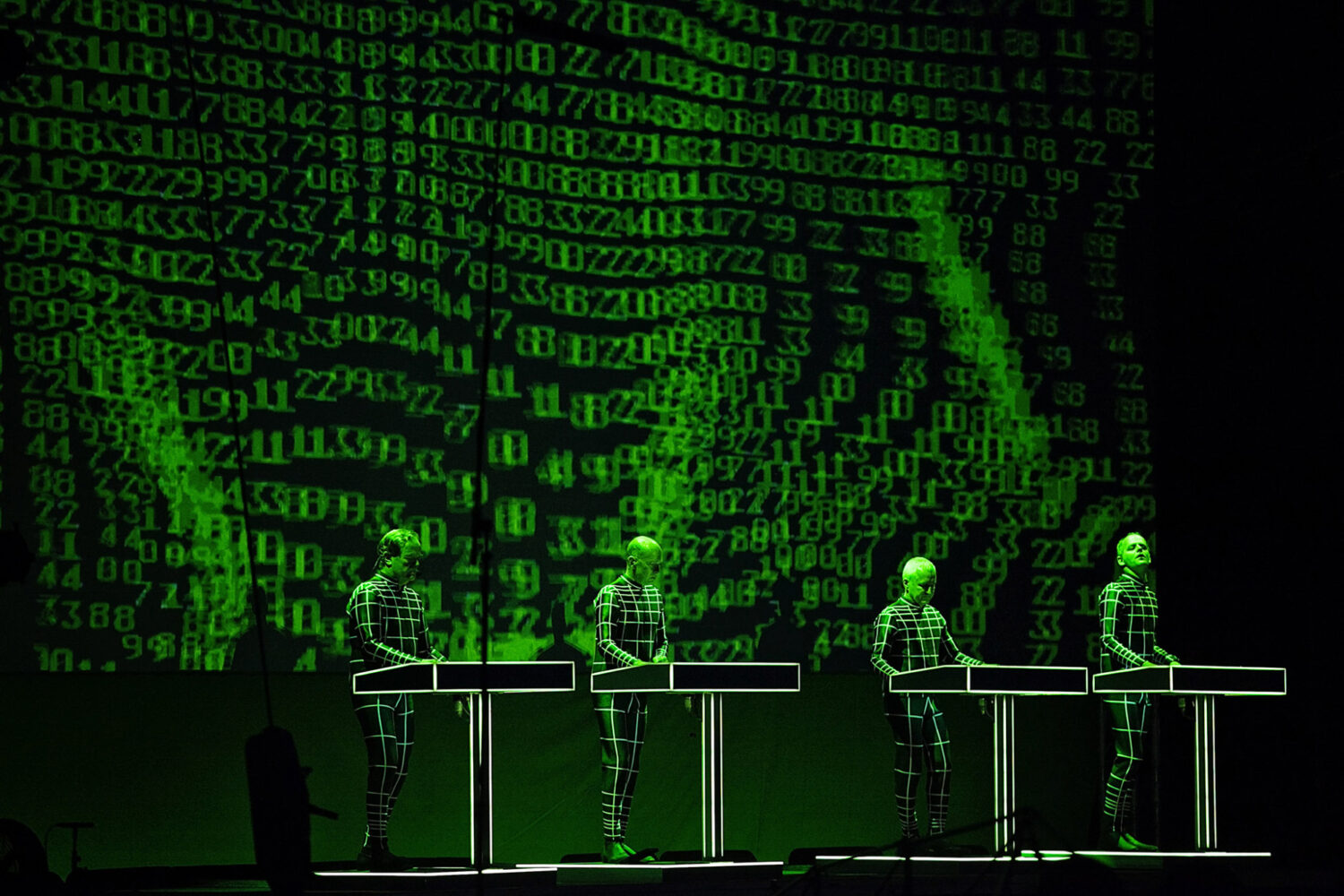