We’re like penguins; really good at regurgitating,” comes the opening line from Two Door Cinema Club’s Kevin Baird as the trio cram themselves into a corner of London’s Lexington venue. “We’ll have really
professional answers for you,” Alex Trimble, the group’s frontman laughs. We’ve caught them on one of their only days of UK press prior to the release of their new record, and while they’re all mega-watt smiles this and Burberry jackets that, we’re relieved to find that the threesome are pretty much just how we left them. There is one difference, though. This time, one of the band has the honour of an Olympics opening ceremony appearance under his belt.

“It was such a huge number [of people watching] that it didn’t even make sense to me,” Trimble shrugs, as if we’re talking about going on the tannoy down your local Tesco. If it was 100,000 people, that’s a number that I can have in my head, that I can visualise. Over a billion is not something that I can even contemplate. It’s not something I can even register in my head, so weirdly there were no nerves. It was fine, very relaxed.”

Handy though, we point out, that the powers that be went and scheduled this London 2012 business right before Two Door are set to release their second album, ‘Beacon’. “Yeah, that was a blessing,” agrees guitarist Sam Halliday.
“It definitely feels like we’re in a really good place at the moment,” bassist Kevin grins. “We’ve just put out a new single, it’s gone to radio and people are actually playing it. And not just in the UK but in America too.”
“Yeah, and we’ve not had to release it six times just for radio...” Sam quips, interrupting.
“We’ve done that before. Everything feels really strong. We’ve talked to lots of people and anyone that’s heard the record seems to love it and it’s really exciting. And obviously, the Olympics was a massive boost for the band. So we’re just knocking around now until [the album’s released on] 3rd September.”
“We always talk about bands in terms of the football leagues.” Sam trails before asserting, “It feels very much like we’re in the play offs for promotion to the premiership.”

That seems to be a pretty solid assessment of where they stand. With the release of their new full length just around the corner, the Northern Irish band are in good spirits, and quite rightly so. Their constant touring and highly anticipated second album is just about ready to propel our protagonists to a different plane entirely. “We’re never really not on tour,” Kevin laughs when we put it to them.
“That’s the way our world works.” Alex explains. “I think that’s one of the most sensible ways to deal with the music industry these days. And it’s not something we complain about but it is necessary to be on the road more often than you would’ve been maybe ten years ago.” “It’s the source of our presence now, and our success.”
“It’s not as easy to put an advert on TV and sell several million records any more.” Alex continues. “You’ve really got to work for it and maintain a connection with fans; constantly reach out to new people, develop a fanbase and a strong base of supporters. Whereas you didn’t need to work as hard at that previously, I don’t think. So it’s what we do, it’s what is most important to our career - to our longevity.”

But it’s precisely this touring and reaching out that has scored Two Door Cinema Club a spot right at the forefront of so many people’s minds. If you have to pick between being a studio band or a touring band these days, there’s no prizes for guessing which one this particular partnership would be.
“It’s because we just want to play everywhere,” Sam pipes up. “It would be easy if we just wanted to be a UK band and we did two months touring a year, but whenever you get offers in it’s hard to say no. And also, being from where we are and missing out on a lot of touring bands, it’s so important to us to try to get everywhere.”
“It’s a constant conflict within ourselves,” chimes in Alex. “On one hand we’ll be on the phone to someone complaining that we haven’t had a day off in so long and with the other, we’ll be writing an email to someone else saying, ‘why haven’t we been here yet?’ It’s difficult to find a balance.”
“A really good thing about our band is that I reckon a really high percentage of people that who say we’re in their top five or top ten favourite bands will have seen us play live before. When you look at someone like Muse or Lady Gaga, I don’t know how many people would list them amongst their favourite bands and would’ve never seen them play. It’s kind of crazy.”

Taking influence from their touring family, ‘Beacon’ sees the band attempting to work in some more experimental flavours as well as wracking up a whole list of inspirations: The Beatles, for one. “It’s definitely harder to be experimental now,” Sam begins.
“It can let the music down if you take it too far.” Alex affirms. “The thing with The Beatles was that they were pioneers and no one had ever done that stuff before. They were a rock band and then they played with an orchestra and they played with a string section and they got other musicians in, and they would write songs using other ethnic instruments. And it worked, so now there’s these staples that bands can go to. If you try and pioneer something these days, it’s very rarely going to be something that works because people have worked out what works and it’s been done before. You have to just take the bits that you love about every one else’s unique-ness and combine that to create something unique of your own. It is hard to come up with something entirely original in pop music. I’m sure it exists but it’s entirely elusive these days.”

With their new look, their more developed sound and their ever expanding live shows, you might think that Two Door would be wanting to retain an air of artistic mystery. But one quick glance at their Facebook page will soon rid you of any such notions. “It’s so crazy now that we were in a band when Facebook was starting out, and Twitter as well, and they were our first steps into it,” Kevin smiles. “It was something fun, you know. It was just us f**king around. And then you start to realise more and more how instrumental it’s become; something like Facebook, which was all just like, ‘I’m having this for dinner’. Now there’s so much traffic and just so much going on, it’s gone the other way. Not so much Twitter but Facebook in that you actually have to almost step back a bit and if you say something, it has to be important. It’s strange that something that just says in a box ‘What’s On Your Mind?’ has become so instrumental in creating a buzz. I think it’s scary now that people are trying to control it more in terms of labels and things like that. It’s all just taken away from what it was originally, which was just telling people what you were thinking. Now it’s advertising. And when you’re advertising, you have to do it right.”

Despite how instrumental social networking has been to the band’s success, the band are more than a little wary of what it can mean for the music. “We love going to concerts where you like a band and you’d know the songs but then they’d play a new song and you’d just be blown away and then you’d be like, ‘Oh, I can’t remember it, I can’t remember anything about it!’ but it just hits you for three minutes,” Sam begins.
“Then there’s that moment several months later when that band’s new album comes out,” interrupts Alex. “And even though that song hasn’t been in your head, you put that record on and all of a sudden, that song comes on. And just this flood of memories comes back and you feel that connection. It’s just the most amazing thing. It’s sad that that doesn’t really exist anymore with YouTube and the internet in general. I remember when I started buying records, it was so exciting. I would wait for months and months and months for my favourite bands’ records to come out and I would save up, and they meant so much to me. They were so special and so important. And these days, music doesn’t mean as much and I don’t think it has the same impact on people and it’s a lot more throwaway and people can be a lot more fickle. The internet has done so much to help new music but when it’s abused, it can do so much to destroy good music.”
“It’s a really weird thing for us at the moment as well because we’re obviously playing new songs and we’re really excited about them and we’re going, ‘Oh, we want to play you this new song’ and then everyone just stands there.” Kevin continues. “They’re not watching us. They’re not even listening. They’re making sure they’ve got their framing right and everyone’s in the shot. I mean that’s fine but you want people to go, ‘Just listen to this and enjoy yourselves.’ This is maybe one of four concerts you’re going to see this whole year and this is the first time you’re hearing this song and you like our band, you’ve spent your hard- earned money to come and see this.”
“At concerts, you have professional photographers. Sometimes you have professional film makers. Someone is capturing it for you, and if you really want, you can go and see those pictures taken by professional photographers. You can relive that memory through someone else who has done the job for you. Whereas like Kev said, you’re there and you’re experiencing it through a phone. And, on one side, you weren’t really there for the moment because you were concentrating on something else: capturing something that you didn’t really experience. And then what do you really end up with? You end up with a blurry photo or a fuzzy video that sounds terrible.'
“To me, I don’t understand it. It’s not something that I would ever do at a show. I love to have my camera with me for certain moments and capture them and just be outside the moment but I just think living behind something like your phone can ruin your memory and can ruin very important experiences in your life.”

For fans of the band, it won’t be long before those stolen snatches of songs of YouTube evolve into promotional clips proper with the campaign
for ‘Beacon’ about to kick off. Only time will tell whether they’ll be relegated to the bargain bin but if we were the betting types, we’d chance our arm that Two Door Cinema Club are set to qualify for a league of their own. 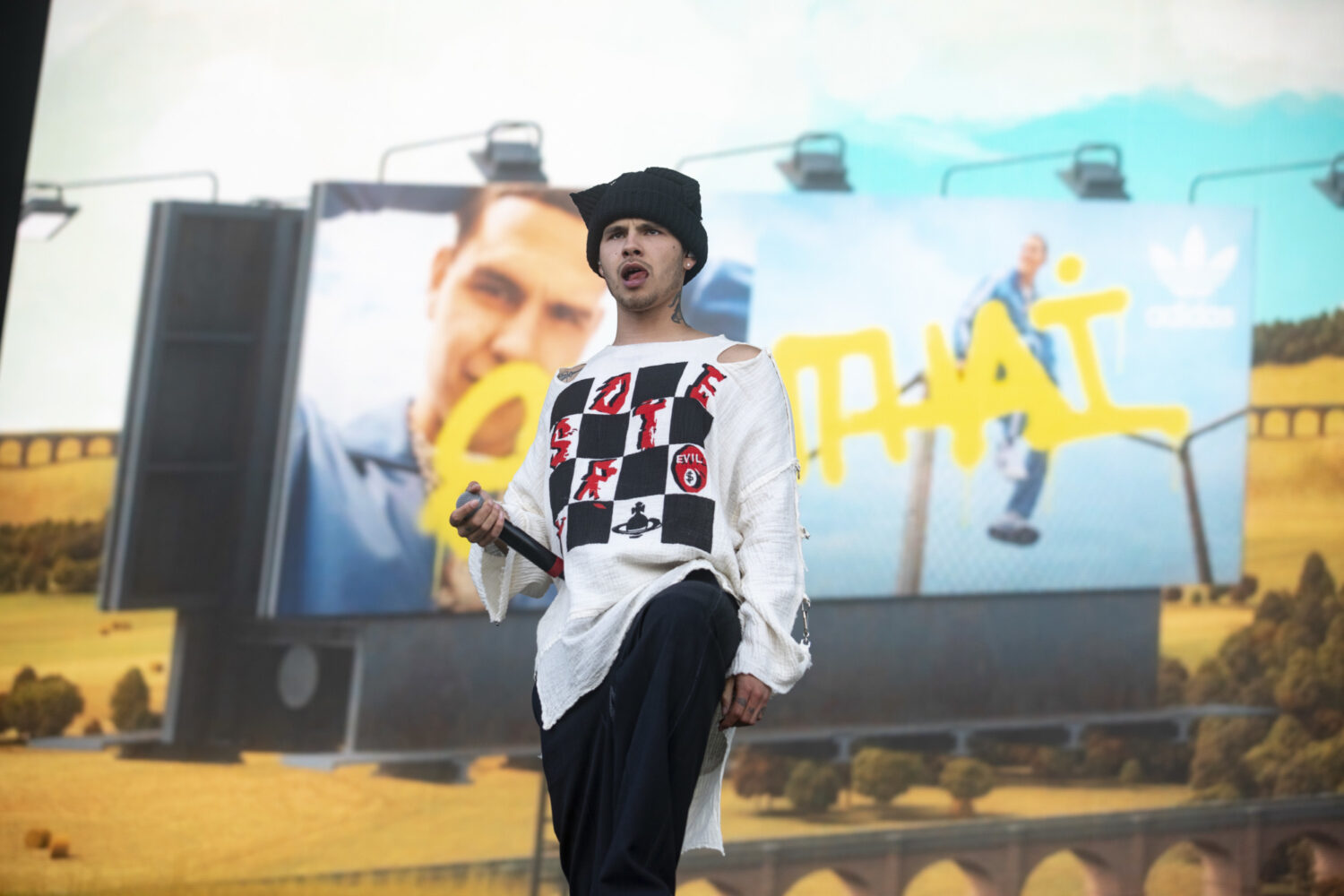 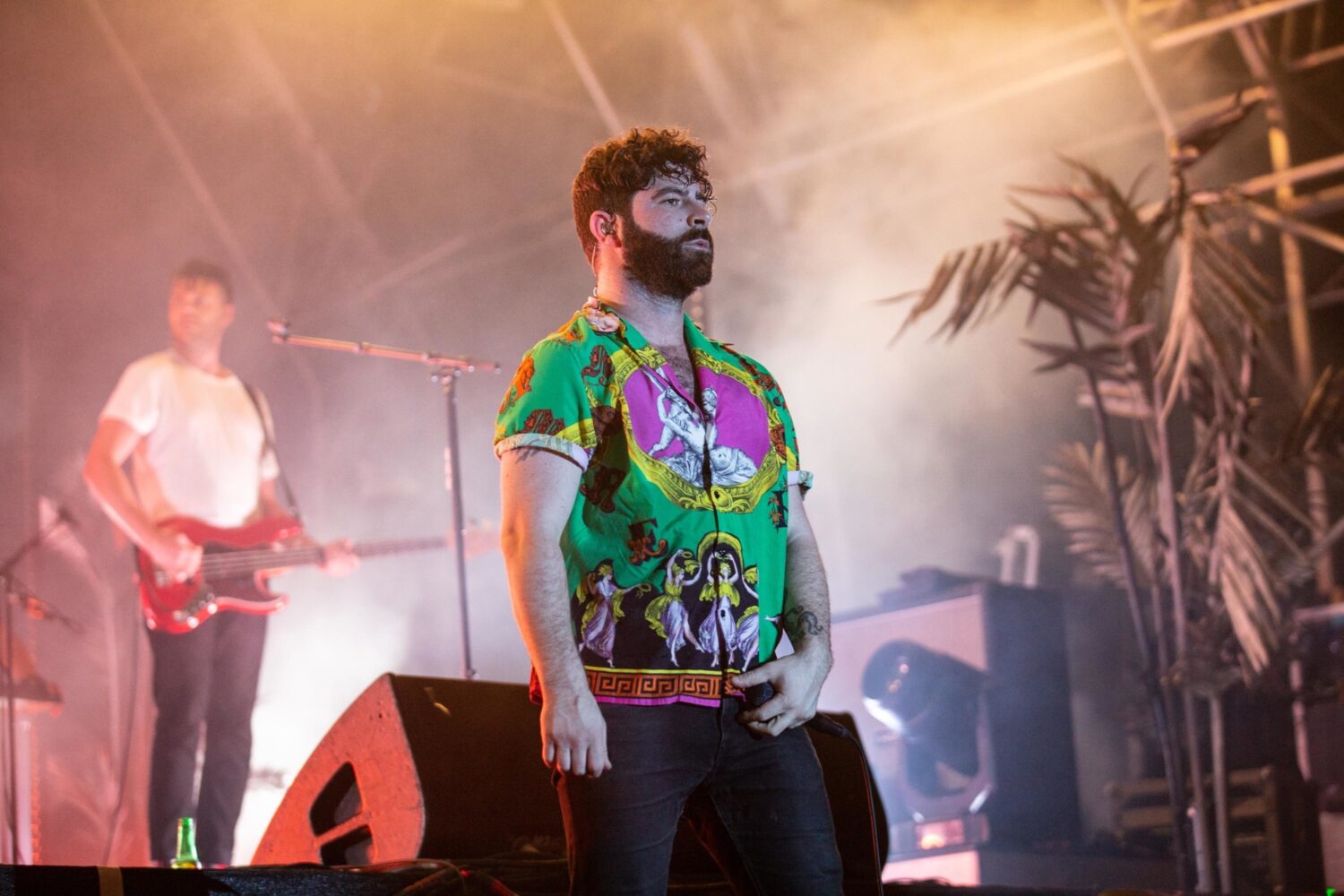 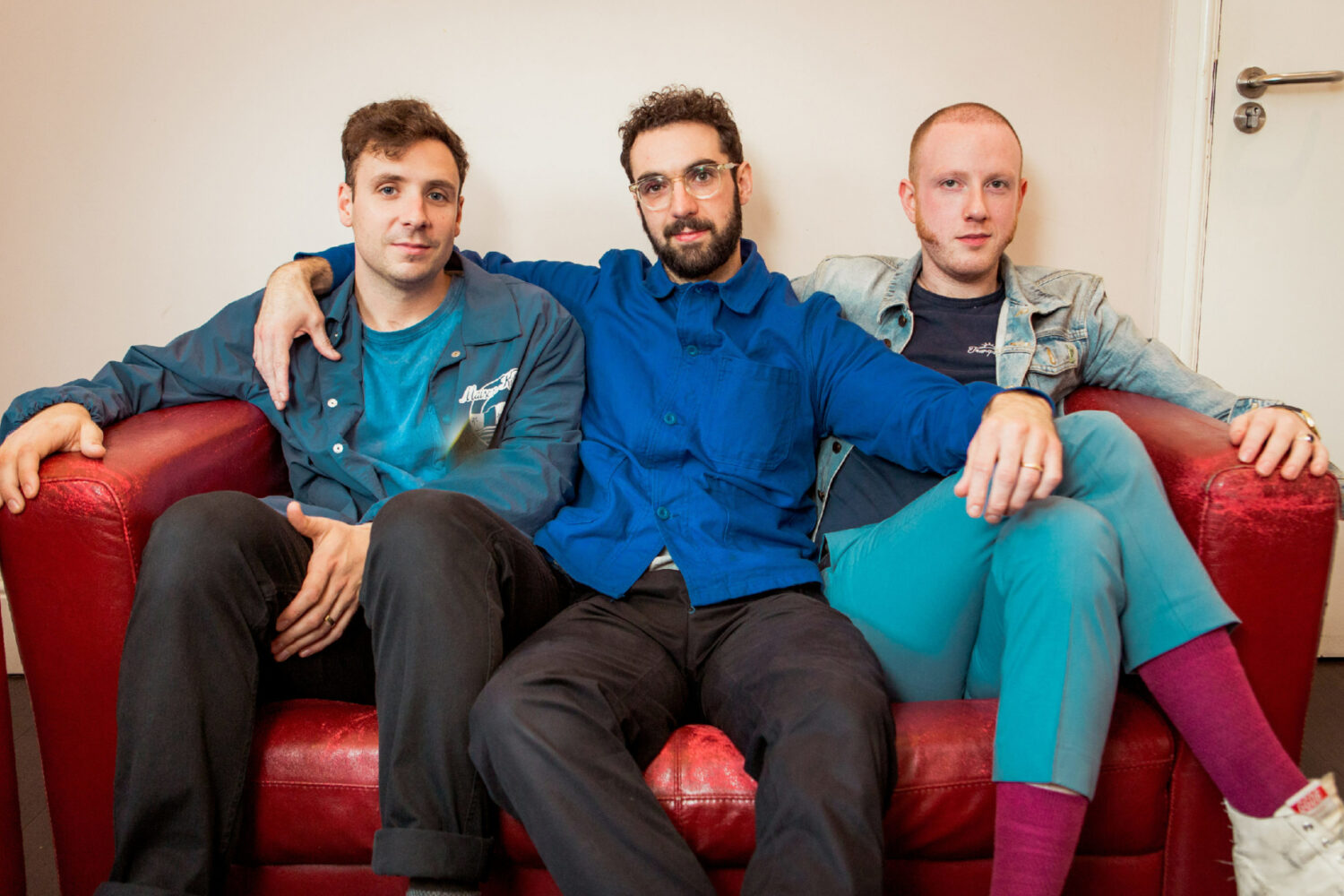 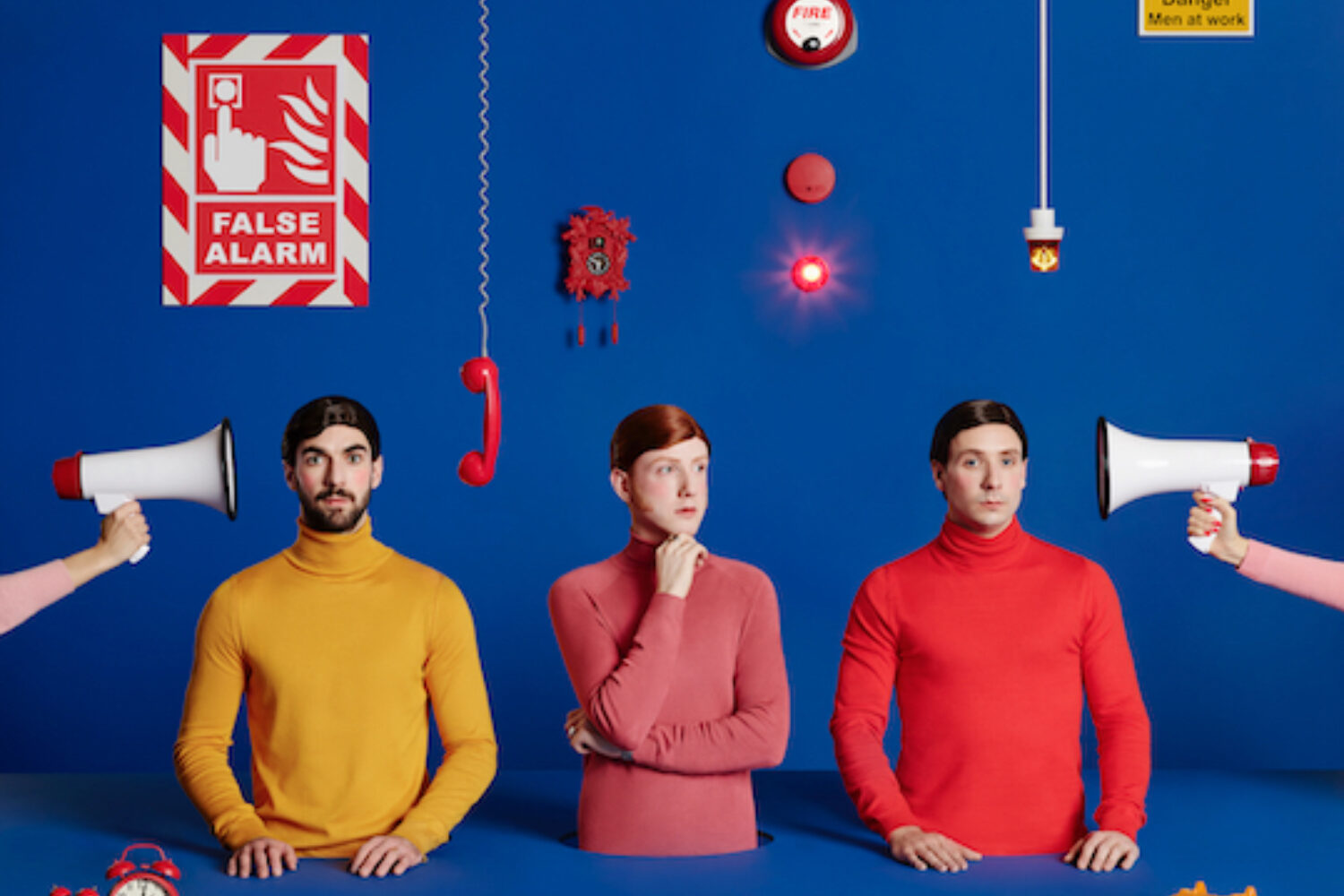