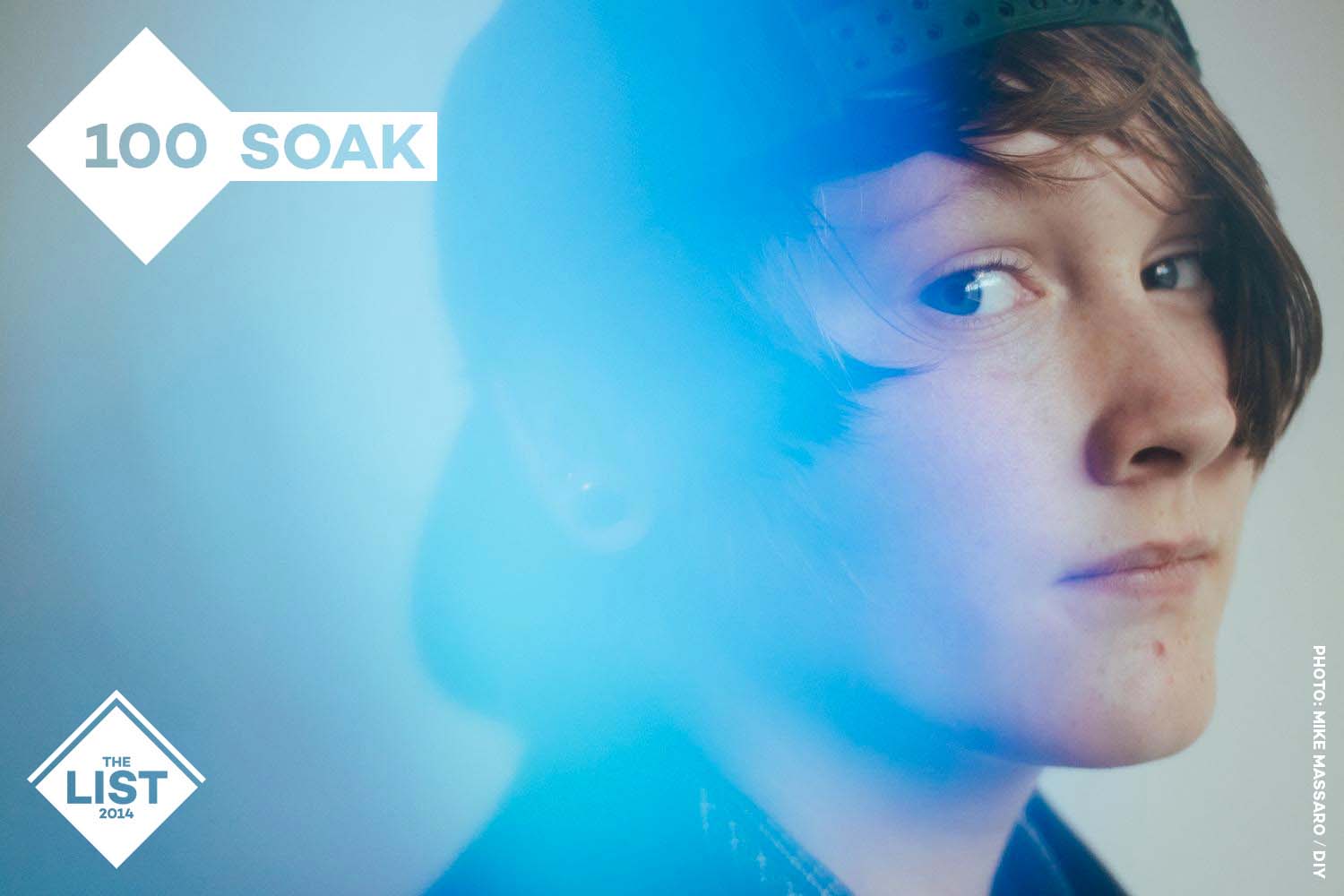 SOAK is a dinosaur-loving, skateboarding superstar in waiting.

She loves dinosaurs, skateboarding and writing heartbreaking songs - it’s only a matter of time before the rest of the world falls for SOAK. Tracks do most of the work, simple acoustic numbers draped in emotion. But there’s a big story behind the Derry-bred talent, like how she fended off A&Rs while taking her GCSE exams, how CHVRCHES put out her debut single, how she penned a deal with Rough Trade after being touted by majors for five solid years. Next year Bridie Monds-Watson releases her debut album, the eighteen year old standing out as a genuinely unique talent amongst all the Sound Of 2015 chat. Jamie Milton

Chilled out customers making a bold first step, Childhood have given glimpses of a huge future.

Frontman Ben Romans-Hopcraft’s ‘fro wasn’t the only thing about Childhood that got bigger in 2014. Their fanbase also ballooned in size, thanks to a dazzling debut effort in the form of ‘Lacuna’. Nostalgic and glossy, it was a record that perfectly captured the innocence and creativity that youth is basked in. Part of its shimmering beauty came from the genius production wizardry of Dan Carey, who decided to turn off all the lights and inject the studio with billows of lasers and dry ice, making the recording space resemble a 90s raver’s house after a power-cut. As bonkers as it may sound, it worked wonders; ‘Pay For Cool’ glistens with its snaking guitars while ‘As I Am’ is more chilled than a refrigerated Mac DeMarco. Basically, Childhood showed how to be laid-back in effortless style, gliding through 2014 but making sure to leave a ‘Lacuna’ – a literal gap in the narrative – that 2015 can fill. Kyle MacNeill

More than a ‘Crush’, Karen O has established herself as an artist with endless talent.

Anyone's year bookended by Oscar and Grammy nominations would be a good'un; for Karen O, the critical success of 'Moon Song' is just the beginning (and, erm, end). The Yeah Yeah Yeahs frontwoman showed her rough cuts are better than the final polished product of most – debut solo full-length 'Crush Songs' proving mind-bendingly beautiful, intimate and gorgeously raw as it is endearing. Emma Swann

The bastion of all things bonkers, Merrill Garbus is approaching her finest hour.

Ever committed to turning as much of the world as possible into a gigantic streamer adorned playground through the medium of music, Tune-Yards not only brought the party this year, she more or less was the epitome of one. From her batshit onslaught of banging percussion and Nintendo innards at Bestival to third album ‘Nikki Nack’, Merrill Garbus’ tunes really do continue to bring all the boys (and girls) to the yard time after time. El Hunt

Think you know what a two piece rock band sounds like? If you’ve not seen Slaves’ live show, think again.

You don't forget the first time you see Slaves play live. Most bands, good, great or completely indifferent, can slip even the most photographic of memories after a while, but not Isaac and Laurie. Every time a more delicate soul encountered them on a crowded 2014 festival circuit it would be the same. "Have you seen Slaves yet", they'd proclaim, wide eyed with shaky hands. "They're... they're different." Like a provincial pair of early 80s office workers running from the man, living out their own personal take on Michael Douglas in Falling Down; from the first riff it's as if they're facing a tornado rather than a crowd. Interspersed with tales of Royal Tunbridge Wells, their thundering agit-rock is sharper, spikier and far, far more in your face then any of their percieved peers. Bono beware, 2015 is going to get loud. Stephen Ackroyd

King of the internet, Ryan Hemsworth took the brave move of going it alone this year.

Sadboys unite, because nobody understands ‘making it’ online quite like Ryan Hemsworth. His latest LP, ‘Alone For The First Time’, is just a blip on the producer’s radar. He runs his own Secret Songs label, fledging exciting releases from brand new artists like Kero Kero Bonito. He’ll just as likely #breaktheinternet with a hilarious tweet than bring SoundCloud to a halt with a new track. And he once played a DJ set to a crowd consisting solely of dogs (for South By South Woof). In 2014, there’s nothing that works better online than a dog (doge). Jamie Milton

Cocky and firmly-assured of his bright future, Shamir has the world in his hands.

Yes, yes, he’s the best, fuck what you heard - anything less is obviously absurd. Las Vegas-born Shamir Bailey is anything but average, but he penned his breakthrough single ‘On the Regular’ in a few throwaway minutes, rapping for the first time before being told by outsiders that he might have a knack for the stuff. Before, he was emoting on disjointed pop tracks via New York label GODMODE, and given how the now XL-signed newcomer makes small work of big topics, that’s set to continue with all eyes locked on 2015. Jamie Milton

They get days of the week wrong, they write lyrics that make the world cringe, but Kasabian are one of a kind.

Despite everything - the gak rush of ’48:13’, the humanity-defying bolshiness of their every move - Kasabian aren’t going away anytime soon. It takes guts (or sheer lack of sense) to make a record like their latest, which at the time DIY described as the real-life manifestation of Jez and Super Hans’ Peep Show band.

Since then, things have spiralled out of control even further. Commemorative Glastonbury t-shirts were sold showing the incorrect date. They somehow allowed extravagant stage lighting to show the words “London is full of cunts” at a Glasgow gig (production issues, obviously). And they released a fairly successful single containing the words “Horsemeat in the burgers, people commit murders, everyone’s on bugle, we’re being watched by Google.”

And it’s true. We’re all on bugle. We’re suckers for search engines. Some people murder other people. And Kasabian are a priceless shitty gem in a sea of full of normality. Allow this recent spoof Twitter account to explain in more astute terms. Jamie Milton

JAWS have gone from beach pop concern to determined grungers, this year.

At the back end of 2013, Jaws had but a couple of EPs to their name. And while 'Milkshake' and 'Gold' showed promise, it wasn't until 2014 they were able to fully realise it. 'Be Slowly' shows a band breaking out of any geographical shackles – where fuzzy indie-pop was suggested previously, gnarly grunge appeared in all the right places. By the time the Birmingham quartet headlined the London leg of the DIY Presents Tour 2014 in November, those shadows cast by their neighbours throughout 2013 were nowhere to be seen. Emma Swann

A curator with a cause, SBTRKT established himself as one of the best producers in the game.

SBTRKT’s already unearthed the sound of 2011’s dancefloors, and three years on, Aaron Jerome’s not only stepped up his game, he’s blown all imagination and expectation out of the water. Whether pulverising sweaty festival tents with ‘NEW DORP. NEW YORK’ - flanked by his mates Ezra Koenig of Vampire Weekend and Warpaint’s Stella Mogwaza – or repping new talents like Raury or Denai Moore on his diverse and madcap second album, Aaron Jerome is quietly one of the most innovative dance producers around. El Hunt

It’s a dark and intense take on the ‘For All We Know’ track.

New track follows on from ‘Wonder Where We Land’.