“I heard the Bon Iver album when it came out, and I was like “what the fuck?!” exclaims Dirty Projectors’ Dave Longstreth, adopting an outraged screech for effect. “Fuck you!”
He’s referring to the pair’s shared affinity for staying (or in Dirty Projectors’ lyrical case, living) “at the Ace Hotel”, while seated in – you guessed it - Justin Vernon’s favoured lodge of choice. Dave insists he never constructed today’s scenario as a meta device to psych out his interviewers, but it’s an idea he’s willing to adopt going forward. “I like that,” he grins. “Let’s go with that.”

Coincidental Bon Iver parallels might sound fairly bizarre from most people, but in the context of the last few years Dave’s had, they’re fairly unremarkable. Since releasing ‘Swing Lo Magellan’ five years ago, he’s weathered a break-up for one; a heartbreak that left him questioning the entire future of Dirty Projectors going forward. Faced by a brick wall and creative block, the frontman changed tact, turning instead to writing with his heroes. Since, he’s worked alongside Kanye, Rihanna, and some bloke called Paul on ‘FourFiveSeconds,’ holed up in New Orleans with Solange to collaborate on ‘A Seat At The Table,’ written string arrangements with Joanna Newsom, and adopted enigmatic producer Rick Rubin as his agony aunt. As you do. Alongside all that, Dave also decided to uproot, move to LA, and build a studio from scratch. Just a few spinning plates to balance.

“I couldn’t have made this album without doing all of that,” he states.

“It was really about putting myself back together.”

The catalyst for this sequence of events was – as he freely admits - his break-up with former Dirty Projectors bandmate Amber Coffman. Far from tip-toeing around the topic, the richly orchestrated ‘Up in Hudson’ paints his subject in unmistakable detail, remembering how he wrote ‘Stillness is the Move’ for his then-partner, and recycling the fractured line “we don’t see eye to eye” (from another ‘Bitte Orca’ track, ‘Impregnable Question’) in a painful new light. The pair remain on amicable terms; Dave produced Amber’s solo record, and ‘Dirty Projectors’ ends with a note of acceptance and resolution. But rewinding to the final days of touring ‘Swing Lo Magellan,’ it’s no surprise Dirty Projectors’ future projection felt muddled.

“I felt torn,” he says, of the moment where the whole core of the band changed drastically. “I want it to go wherever I want to, land and sea, an amphibious vehicle. That being said, I felt like I was honing in on this relatively stable aesthetic and family of musicians,” he goes on, referring to the band’s familiar cast of players popping up on various albums by way of a musical revolving door. “But then, life is what happens when you’re making other plans,” he shrugs. “It was disorientating to find myself, in a way, alienated from this original conception that I had of the band. It was very confusing.”

Healing from his relationship’s ending, and wholly focused on his work with other musicians, Dirty Projectors was at the bottom of Dave Longstreth’s priorities. Building up fragments of beats, and piecing together grid-like structures while on the train from Hudson to New York served as his own way of trying to capture the contents of his brain. “It’s not an overtly emotional thing but it’s very relaxing to do,” he says. It was certainly never meant to turn into the project’s seventh album, but luckily Rick Rubin gave him a talking to. “I was definitely looking for mentor-type figures,” Dave starts. “I felt like I needed advice. Playing them for him, he did really give me a sense of... ‘you’re concerned about this material being too different from earlier Dirty Projectors music.’” he ponders. “But that’s what Dirty Projectors does. That was eye-opening." 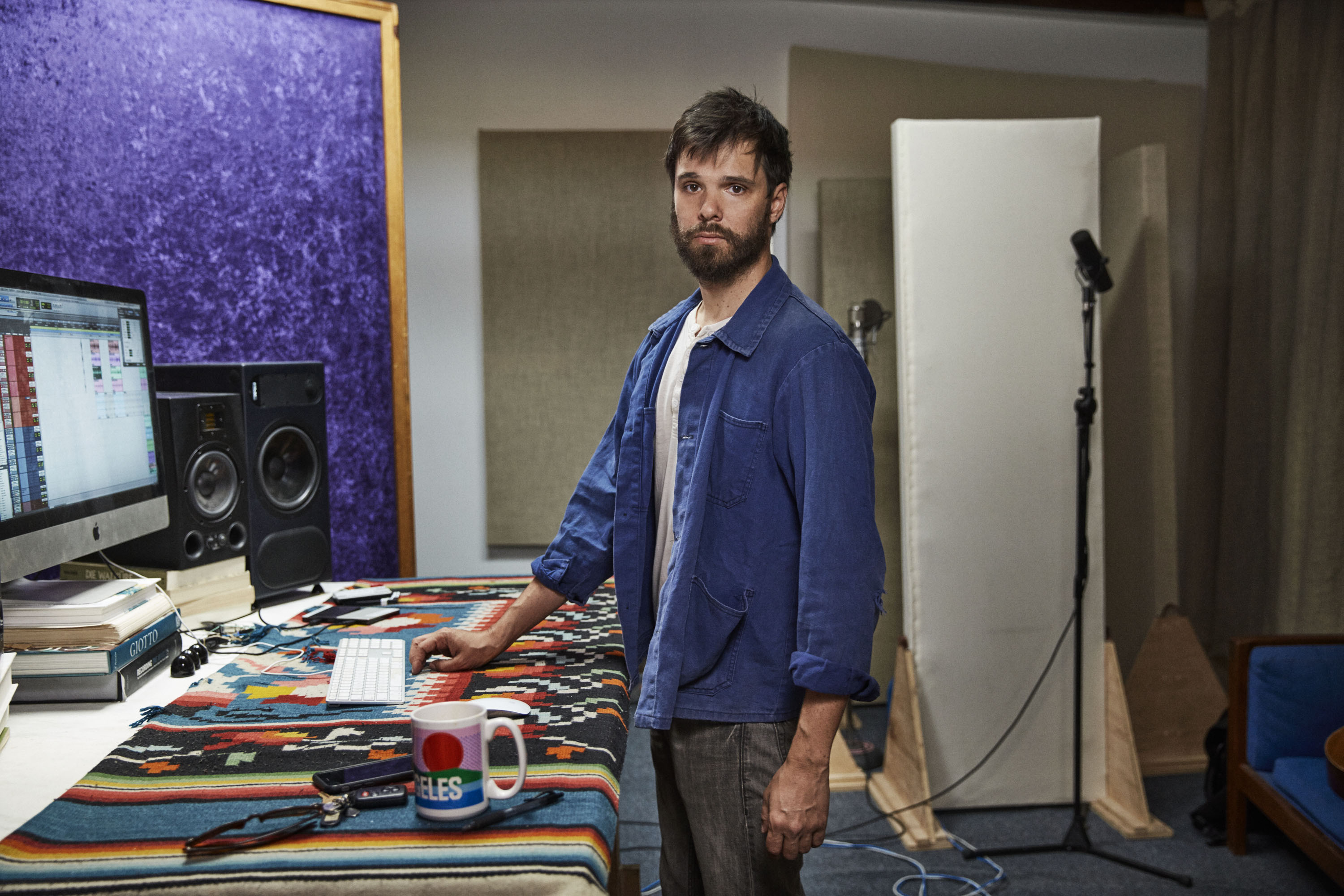 ‘Dirty Projectors’ is certainly a stark departure, that’s for sure. Glitching and synthetic, jarring harsh technological stutters with richly trilling orchestral arrangements, it’s a record that battles with itself musically, whizzing around in constant looping circles, and somehow – in all the static and dissonance – finding a path that sounds cohesive. ‘Death Spiral’ plunges downward in an unstoppable descent, all Disney piano-licks gone rogue, and belching gusts of crunking synths. ‘Ascent to the Clouds’ soars stratospheric again, as “pleasure slides into pain, and into pleasure again”. For all the talk of ‘Dirty Projectors’ being a break-up album, frequently it feels like a piecing-back-together album instead; from its actual construction, to the symbolic decision to self-title. “The process of making it was really about putting myself back together,” Dave concurs, “so yeah, that makes sense to me.”

‘Dirty Projectors’ is all the more surprising considering its predecessor ‘Swing Lo Magellan’’s constant rejection of technology. While the 2012 record grappled with how the hell it’s possible to get lost in a world fully documented by hand-held maps accessible with a single thumb-swipe, the follow-up constructs purposeful grids and revolving loops, and gets lost in those instead. Just as Kanye West did on his own heartbreak-fuelled album, it embraces the 808 synthesiser, too. “This is maybe something that I got out of working with Kanye a little bit,” Dave agrees.

“I just feel great about using all the tools that are there, all these incredible, colourful tools,” he goes on. “They’re so vibrant, you can use them so insanely. I feel like the kind of dour skepticism toward technology on ‘Swing Lo Magellan’, ….” he pauses. “For me, I’m always inclined to look back on what I do immediately preceding, and be like ‘pffft!’” he scoffs. “To me it’s not how I feel now."

Looking back and taking a different direction is engrained in Dave Longstreth’s nature. He’s well aware of the fact that as a freshman at Yale working on ‘The Graceful Fallen Mango,’ putting together his so-called glitch-opera ‘The Getty Address,’ and even writing love songs years on for ‘Bitte Orca’, his latest work has a personal core never quite associated with Dirty Projectors previously.

“I started very much in the school of obtuse collections of work that suggest lots of different things,” he says. “The more porous it is, the more possibility it has. But right now I’m on this tip where, a lot of the songs that mean the most to me are capable of meaning one thing when I’m ten years old, another when I’m twenty, another when I’m thirty,” he adds. “This album is the only one I’ve done this way, so it does feel hard, and vulnerable. It’s kind of hard to do some of these interviews,” he chuckles. “I do feel like this is an album that I had to make.”

“It’s opposite, and in this emotional world, both seem real and valid. It’s definitely a very interior world,” he says, giving his own take on the record, and getting a bit too abstract for first thing on a Tuesday morning. “Overall I would stress that the album’s not a newspaper or a journal or a Facebook rant,” he finalises.” It’s definitely a shattered cloud of impressions and minutiae reassembled in a way that’s not reality, and not history. It’s a song. That said,” he adds, “a lot of the songs are me.”