A few years back, Wavves frontman and songwriter Nathan Williams and his bandmate, bassist Stephen Pope, signed their garage rock outfit to one of the biggest labels in the world. Having worked tirelessly since the band’s formation in 2008, it should have been happily ever after. “We just thought, well, it couldn’t be any worse than the labels we were previously at,” Nathan explains. Unfortunately, it turned out not to be a fairy tale, and things quickly turned Grimm.

Nathan admits he felt determined not to play ball almost immediately, admitting that “we bucked heads pretty early on.” After 2015 album ‘V’ underwent a turbulent production period, the band decided they’d had enough and they soon parted ways. “It wasn’t the right fit for someone like me. They didn’t understand what I was trying to do,” he explains. He’s now come to a realisation about that time: “Why would they even care about Wavves?” he asks. “Who over there would even fucking know what to do with a guy like me?”

Despite things going rather sour, they did eventually get their happy ending. Splitting with Warner not only led to the creation of his own label Ghost Ramp, but also to the self-release of new album, ‘You’re Welcome’. It isn’t Nathan’s first foray into releasing work himself. Back in 2013, he released the ‘Life Sux’ EP, but it didn’t exactly go to plan. “I fucked it all up. Basically everything that could have gone wrong went wrong,” he says, explaining that it was the presence of a management company that really complicated matters. “I was relaying my message through them and it became distorted. At that point I just gave up.”

Now with Ghost Ramp, there’s no middle man, no third party to mis-interpret what Nathan is trying to do. “This is the reason DIY works,” he states. “When you have anybody in between you and your art, it’s gonna water it down, no matter what it is.” Nathan whole-heartedly believes in that kind of freedom, and the community that it garners. As he puts it, breaking down that additional barrier creates “some sort of conversation” between a band and their supporters. Everything is transparent, laid out on the table: “what you see is what you get.” 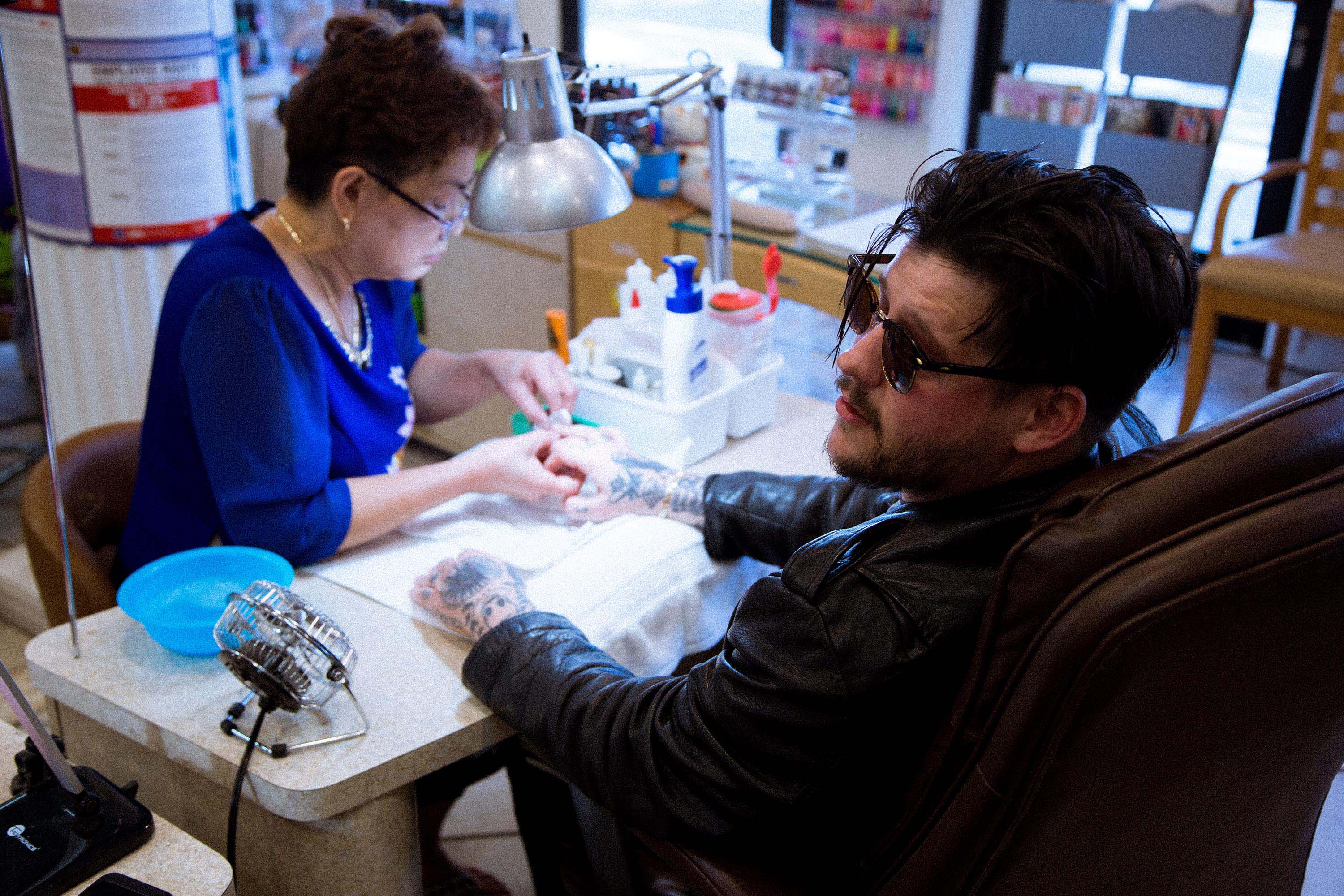 “I wanted to avoid making another pop-punk or garage record.”

The end result is ‘You’re Welcome’; a ludicrously fun record that oozes new-found freedom. Nathan believes that’s partly down to the recording process. Whereas ‘V’ was “more of a band record,” where the group were all in the studio at the same time, this time round things were “more insular”. For a couple of months, he worked on new material almost entirely by himself, “fooling around with samples and seeing where it would lead.” By the time he brought Stephen, guitarist Alex Gates and drummer Brian Hill in on the action, he had over 60 demos. There was even one rumoured to sound eerily like Drake’s ‘Hotline Bling’. Nathan laughs. “It was a little out of my element!”

While, it’s perhaps too much to expect Wavves to return with a dancehall track built around a 1972 Timmy Thomas tune, ‘You’re Welcome’ pushes the band’s boundaries like there’s no tomorrow. “I kind of jumped around genres and there were a few production tricks. I wanted to do something different,” Nathan explains. “It’s never fun doing the same thing over and over again. I wanted to avoid making another pop-punk or garage record.”

It’s pretty fitting, then, that the first songs to really fall into place during the recording process were ‘No Shade’ and ‘Come To The Valley,’ an unlikely pair that sound poles apart. Stephen describes the latter as being “like a show tune,” and it certainly has some ‘Top Hat’ vibes in the singalong chorus and underlying old music hall sample. In contrast, ‘No Shade’ is a sub two-minute blast of furious, scuzzy guitar riffs. Fucked Up’s Damian Abraham was on hand to help, inspired by the idea that the pair might start a brand new punk band. “We ended up recording five almost hardcore tracks, just really fast,” says Nathan. “We listened to them the next day and were like, ‘oh fuck, these are really good!’” If ‘No Shade’ is anything to go by, he’s not wrong.

That’s just the tip of the iceberg. The band delve into everything from glam rock, psychedelia and surf, to 50s doo-wop and even a little bit of chiptune and electronica. If it sounds a bit random, don’t worry: it all comes together in a flurry thanks to blistering punk riffs and some careful planning from Nathan. “I thought, ‘well, it’ll be kind of all over the place but it’ll kind of work if I have the song placement right and have a bit of a common theme.’”

“I’d rather be my own boss than twiddle my fingers.”

Nathan has also expanded out in his lyrics, shifting the focus away from himself and on to the wider world. As it turns out, he was mostly growing a bit sick of answering questions about himself. “When you do interviews all day and people just ask you about yourself, you sound and feel so narcissistic,” he explains. “For me, I’d done it. I’ve talked about drinking too much, every fucking problem I had. I wanted to change the narrative.” And so we’re treated to tales of a drug addict who lived nearby in San Diego on ‘Stupid In Love,’ shouting out to the haters on ‘Million Enemies’ and the anti-corporate message of ‘Animal’, which delves into the soul-sucking nature of the establishment. “I feel taken advantage of and empty inside,” he sings, leaving little to the imagination.

For the most part though, Nathan is happy to escape from his own life with the lyrics, sometimes quite literally. Opener ‘Daisy’ has him musing about an imaginary life he wishes he had where he could get away from everything, “like a deserted beach or a fantastical Antarctica with my pet polar bear.” Even when he does give a glimpse into his opinions on the world, such as on ‘Exercise’, the statements are tempered by moments of optimism, proving that even though the world might be collapsing around them, Wavves still want to be dancing. “When everything is burning down,” he confirms, “we can have a good time because we have each other.”

Think that’s optimistic? Well, hold onto your hats, because Wavves have recorded a love song. “I finally decided to embrace it!” Nathan exclaims. ‘I Love You’ is the result, a tender yet to-the-point number about, well, being in love. “If I was going to write a song like that, I was gonna call it ‘I Love You’ and I was just gonna say ‘I love you’,” he explains. “I feel like it’s the most straightforward way, and most effective way, to come out with it.” He starts to laugh. “That was some more new territory for us!”

In all seriousness, the past few months have been a liberating time for Wavves. With Ghost Ramp, he’s also trying to give that same sense of freedom to others: “they could come with me on Ghost Ramp and I could give them a deal where they don’t have to sign their life away and I don’t have to keep rights to their music for ten years.” Equally as importantly, Nathan and the band have taken complete control over their own destiny, able to turn the tide without waiting for others to make decisions: “I’d rather be my own boss than twiddle my fingers.” They may be riding the crest of one, but Wavves show absolutely no signs of wiping out.

Wavves’ new album ‘You’re Welcome’ is out 19th May via Ghost Ramp.

Taken from the May 2017 issue of DIY, out now. Subscribe below.

The record is out next month.