Looking back on Foxygen’s 2013, the release of their ‘We Are The 21st Century Ambassadors of Peace & Magic’ album seems like the most insignificant part. That was January ­- the following months prompted a spiralling effect that went way beyond the ambitions of a project that began humbly when two precocious kids made music for fun while in school. It was a record that took seven days to record and several months to tour. The process took hold of Foxygen’s collective conscience. It was a period defined by broken legs, rumours of splitting up, inter-band rivalries, egos tripping up on each other. No doubt about it: This is a band drawn to chaos. They partly stage an ‘anything can happen’ drama at live shows. Being idiots is part of their schtick. But even by their standards, they entered the year completely unprepared for what would follow. Nothing was controllable.

Their response was to regain some of that initial stronghold. Cancelled shows and bust-ups had mired their existence, so they went back to being an actual band, not a deleted scene from the Dig! documentary. “We made an album that sounded like every rock band and we then managed to live through every cliche. Every stupid thing you can think of,” admits Jonathan Rado, the more mellowed-out brains of the band when compared to extravagant bone-breaker Sam France. These two have written records since they were 16, but even their relationship was strained within a year dogged with fallouts.

The response - typically irrational in most respects - was to record a 24-track double album, billed under a different band name ‘… And Star Power’. When opinions within the band divided in 2013, they’ve reacted by adding more members, expanding the live act. If they had a problem previously, there’s a chance they’ve just doubled it. Rado insists that this record had to happen. Together he and France ignored a turbulent few months and went back into the studio. They adopted recording techniques that were almost ignored for ’21st Century…’ and they went back to being an actual band, not a hype act swept along a wave into either obscurity or self-destruction.

‘And Star Power’ is the resulting record. It’s an ultra-ambitious return that’s teeming with often bright, sometimes goofy ideas. In their first interview around the record, Jonathan Rado assesses a year that “wasn’t quite as dramatic as people think,” before turning his attention to the sensible next step. “I do believe it’s a great record. I’m really positive about it.”

Watch the Grant Singer-directed video for ‘How Can You Really’ below.

You’ve always been a prolific band. But when did you start forming these songs?
The first song for this record was recorded maybe four weeks after the last one was made, if that puts it into perspective. And then there’s like about a year of writing and writing, and it got to the point where we’d written thirty or forty good songs, not just half-baked ideas. And then we had a hundred half-baked ideas. The minute we were able to start recording again, we did.

A hundred odd songs to choose from, and twenty four of them have ended up on the record.
Right, yeah, something like that. We were sat down trying to put down everything we had. Even if it wasn’t a proper idea, we tried to organise ourselves and turn it all into a full record. But we did, we figured it all out, but we culled so much, so many ideas.

“We were kids just being thrown out in the world with no idea of how to do anything.”

Are you calling yourself a new band? What’s the deal with ‘Star Power’?
It’s the first record - and probably the last record - as Foxygen and Star Power. But I think the idea behind it - and all the records up to this point - is to have an element of surprise. It’s still mainly me and Sam doing the instrumentation. But we had a lot of friends come play on it, a bunch of surprise guests that maybe I don’t wanna reveal just yet. It sounds different. It’s not that ‘60s anymore.

When did you get the itch to bring in more people?
It’s gone through so many incarnations. Since the last record we’ve been thinking about it. Sam literally came up with the title of that record when we were making ‘21st Century’. It was just a case of, ‘I think the next one’s gonna be called ‘... And Star Power’. We talked about it for so long. At one point we were gonna do it all live. 80% of it is just me and Sam. A few tracks we recorded completely live. A few tracks were done in other places. It’s such a mess, I can’t even say. The idea has been brewing for a long time. And what you saw at Coachella is the live incarnation. We’ll be touring with that band. 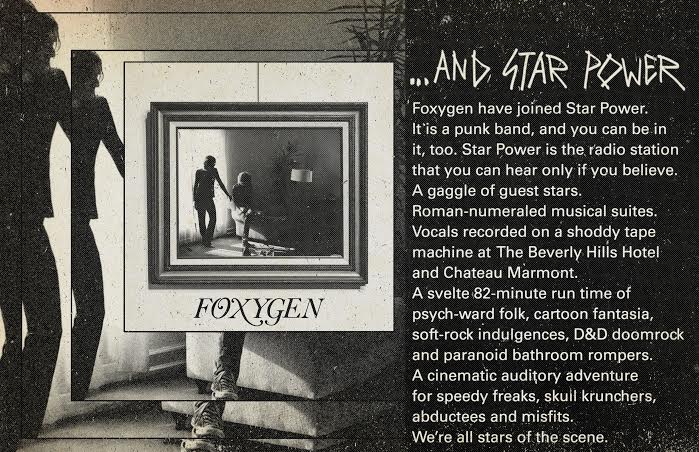 How’s it separated into a double album?
We’ve divided it into different sections, there’s a lot of fun stuff. Sam and I have extreme, extreme love for records that give you more than just the music. Things that give you a setting, a story - or even just to have physical material. Stuff to read or look through, little stuff to find within a record. I just bought this record, ‘Out of the Blue’ by ELO. There’s a cut-out spaceship in it. You can make your own ELO spaceship. I just bought that yesterday and thought it was the best thing ever. I can’t believe someone had this idea and they just executed it. We just didn’t want to make an eight song record. ‘21st Century’ had nine on there. It’s just like, here’s more songs.

It’s quite a daring thing to do, to put out something this big in scope in the hope that people will pay attention.
Within the record there’s a range of songs. Some are a minute long, some eight minutes. ‘How Can You Really’ is the first song on the record. We sort of invite the listener in. And then it deviates into something else and deviates into something else again. And then it comes back to that ‘70s feel.

“There was a need in the world for that type of band, at the time.”

Recording it in LA, Dream Star studios - was it special to have your own space for the first time?
We built it with the budget of the album. It’s in my garage. We did it there and I’ve been doing other projects there as well. This record couldn’t have been made in other reason. We kept thinking of other ideas, like renting a house somewhere, working with producers. And it’s like, we don’t have the time or money to pay for these things and produce a double-album. That would be completely insane. And especially since it took us almost five months to make this record. We made the last one in seven days. We absolutely sat down and spent time on it, and that’s hard to do nowadays. Budgets like that don’t exist. It was really important for us to figure out what the band was about again. After the last year, after everything, we sort of lost sight of that. We forgot what the band had been, other than the one record (‘21st Century...’), which we love. But I think our band has always been me and Sam, making music, recording it and doing everything on our terms.

Was last year testing in terms of yours and Sam’s working relationship?
Last year was hilarious in a way because we lived through every single rock ‘n roll cliche. We made an album that sounded like every rock band and we then managed to live through every cliche. Every stupid thing you can think of. It wasn’t quite as dramatic as people think, but at the end of the year you sit down and you’re pretty worn out and you try and figure out how to get back to where you were. That’s what the new album was about. It was a tough year and a confusing year for sure, but we were kids just being thrown out in the world with no idea of how to do anything, no-one to really tell them what to do.

Has it ever bugged you, being called such a referential band when a lot of people were listening to you for the first time with your last record?
No, I got it. There was a need in the world for that type of band, at the time. ‘San Francisco’, the song, the video; that’s what the world - or the indie rock community - wanted at that particular time. And we just did that right thing in that right moment and it sort of worked. It’s really easy to compare it to those bands. We kind of played into it a little bit, too. I don’t really get bothered by it. It is what it is - people compare everything to everything. No band really escapes comparison.

You’ve referenced Brian Jonestown Massacre in the past and they had this similar sense of chaos. Was any of what was going on with you guys staged in any way? Over-dramatised?
Never on purpose. It occurred to me that we were actually living out Dig! or something. ‘What the fuck. Why are we this band now?’ It’s still like that, a little bit. That’s the nature of what our live act is. It’s a little unpredictable. I don’t think we’re comfortable with being an average band. People sort of want a band to not make them feel threatened or worried, and I don’t think those types of people will ever completely enjoy a Foxygen show. It’s still like that, but it’s controlled chaos now.

Did you have to actually cut off a few things to get this band back to where it was before?
I mean, yes. A few things were left behind. And we added a few things, in very literal and metaphorical senses. If you Google enough things I’m sure you can find out what I’m talking about. This is a new thing. It simultaneously feels like as good as it did when we started recording music, when we were fifteen, just fucking around with things. We remembered how funny the process of recording is. We’d do stupid things where we would just talk before recording takes. We’d leave the mics on and just talk. And each time we recorded we’d go back and do the same stupid bit of dialogue. That sort of fizzled out with the last record. At the same time, it feels completely new. We’re actually a different band.

Foxygen's 'And Star Power' is out 13th October via Jagjaguwar. 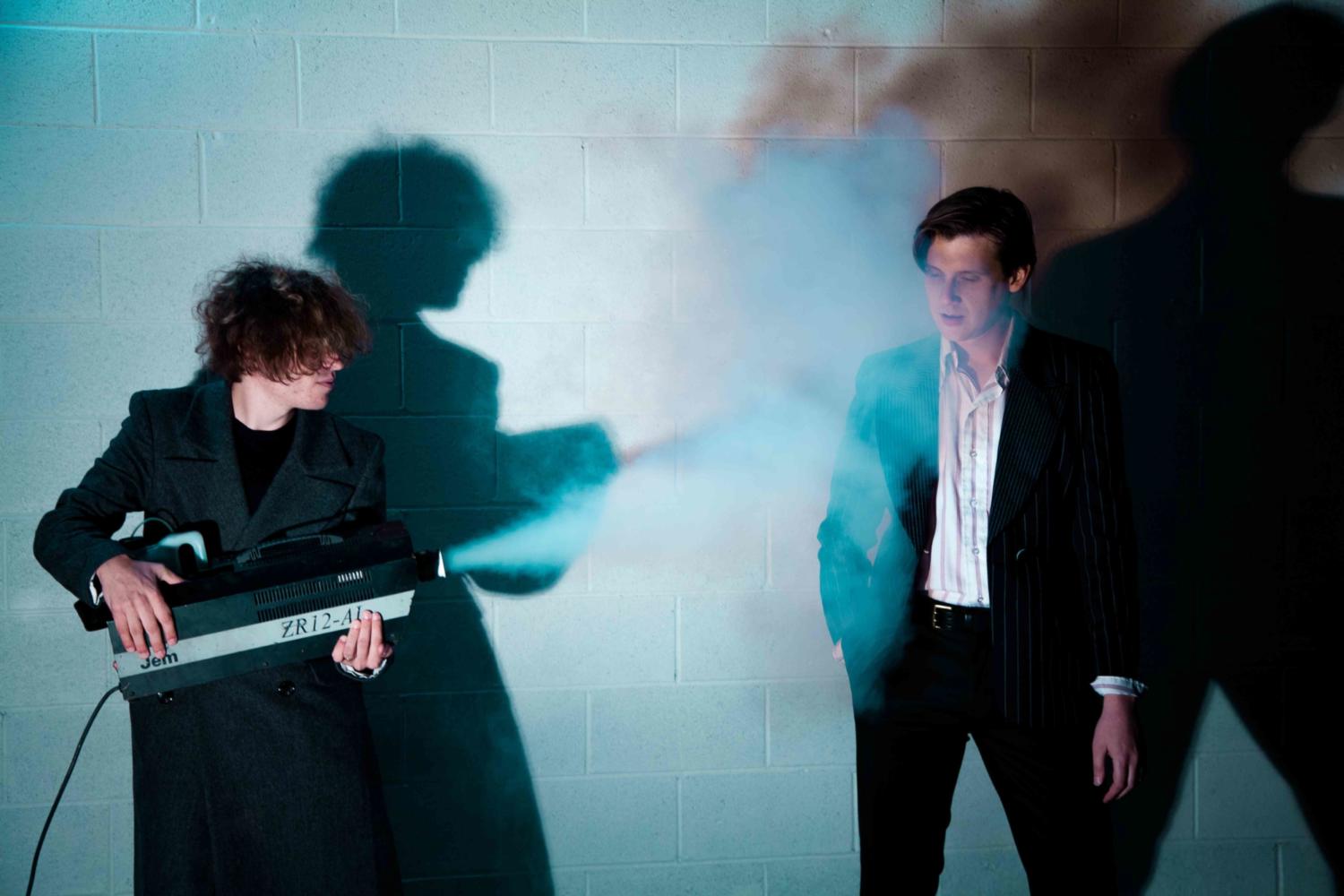 Refusing to tour, railing against the industry and sitting on a tell-all memoir, with new LP ‘Seeing Other People’, LA duo Foxygen are teetering on the edge of collapse – or is it all just an act? 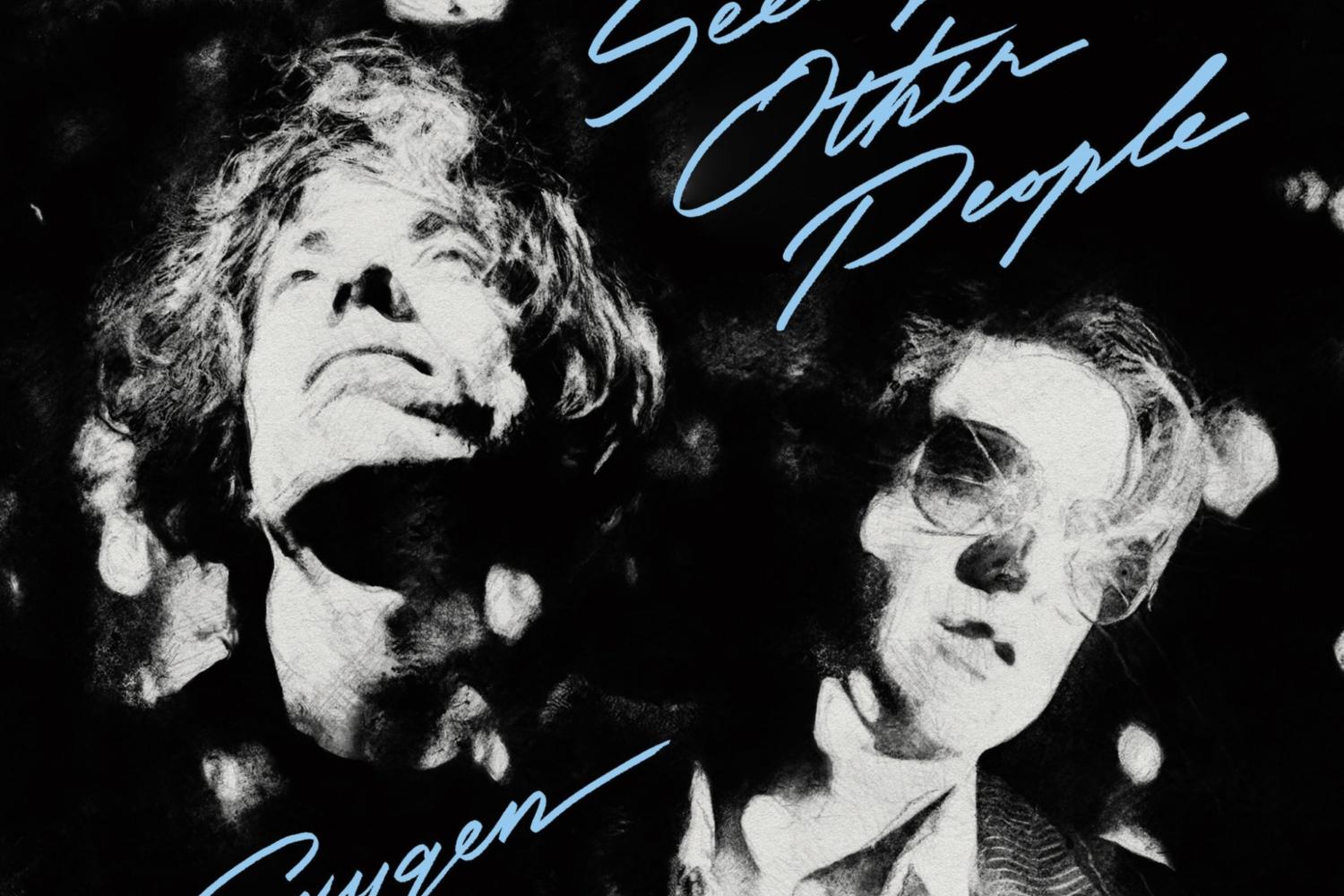 The unpredictable Californians are less up for a bop than an attempt at settling some scores. 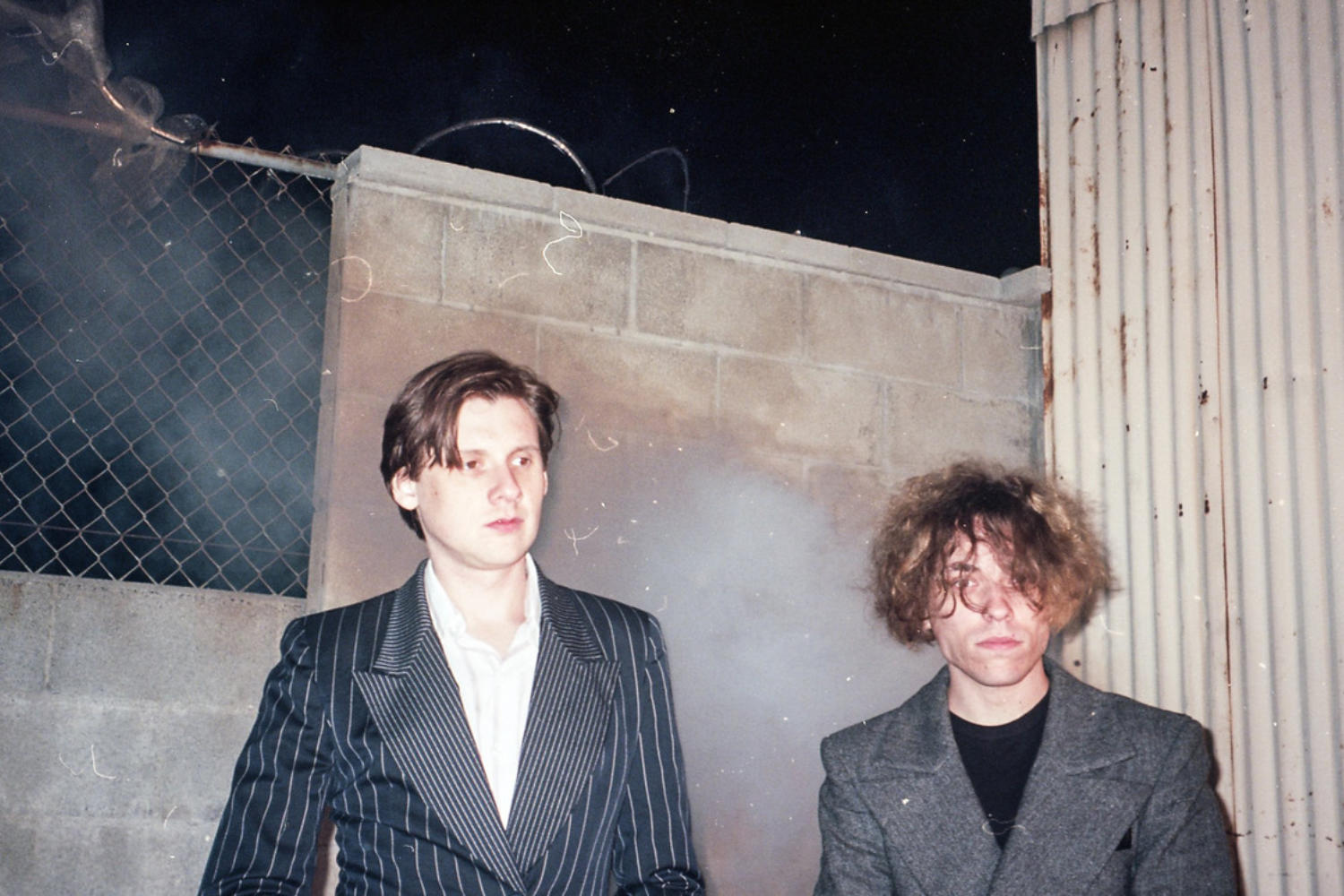 It’s taken from ‘Seeing Other People’, out next week.