From the beginning, Grimes has always been far more than just a music outlet. For Claire Boucher, drawing, video, and visual art aren’t separate channels; they’re all part and parcel of her strange, sci-fi and comic inspired universe.

“I’ve always been a visual artist,” Grimes told ABC News in the run-up to her art exhibition at Manhattan’s AVA Gallery three years ago. “It feels related because it all comes from the same place,” she expanded, in a separate chat with MTV. “I want to have as much output as I can artistically and I don’t really care what form it takes.”

From limited run comic covers and gig flyers, to vast collections of Russian ballet costumes and 15th Century 3D drawings of hell, there’s a lot floating around in Grimes’ creative headspace. We take a peer into the carefully controlled chaos.

Revealing the artwork to her long-awaited fourth album ‘Art Angels’ earlier this week, it’s no great shock to see that - as she does with all of her records - Grimes has designed the cover. The extraterrestrial elfin character on Grimes’ new album cover bears more than a coincidental resemblance to a two-eyed version Boucher popped on her Instagram in January this year. Edition 'No. 4' obviously refers to the fact that this is Grimes' fourth album, with the fictional publishing date being a futuristic 2088. Pricing the cover up at a fairly hefty a $1,000,000,000, there’s a definite air of jokey, overblown horror-flick comic about the whole thing.

It’s already clear that ‘Art Angels’ is inspired by a dizzying selection of influences, all jostling for attention. Grimes has already talked a bit about what she calls ‘bro-art’ in an interview with Q Magazine, picking out the likes of Bruce Springsteen and Al Pacino in The Godfather II as examples. One song on the record, 'Kill V Maim,' turns the famous gangster into a gender-bending vampire who travels through space - obviously - while another is apparently inspired by Russian writer Alexander Pushkin; specifically an epic poem called ‘Eugene Onegin’. It should probably be noted that said poem boasts an incredibly badass woman named Tatyana, who gives absolutely no shits and does exactly what she likes. Having spoken out before about her opinions on gender constructs - super brief summary: she's got no time for them - it's no surprise Grimes has gone down that route.

That’s pretty much all we know so far, but knowing Grimes, that just scratches the surface. “There seems to be all this meaningless art,” said Grimes in 2011, “and I’d hate to contribute to that.” 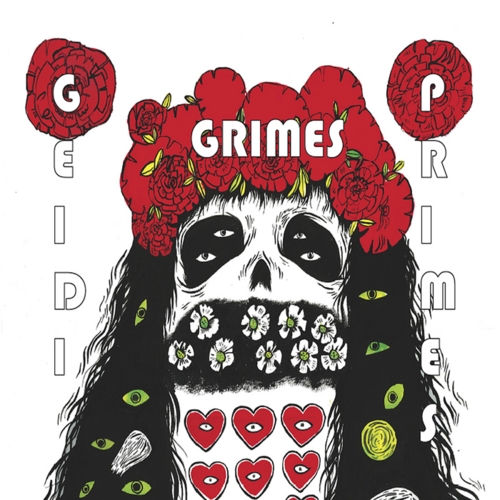 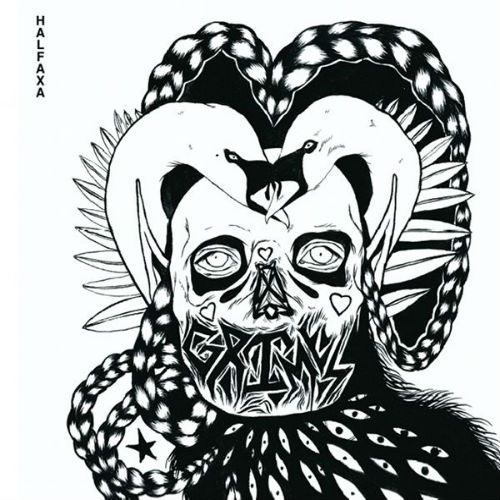 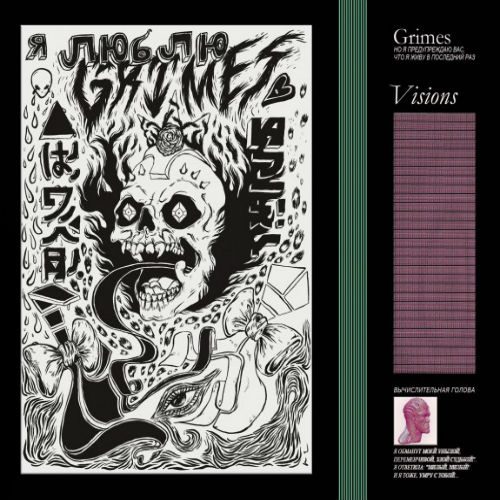 There’s plenty more to pick apart in Grimes’ previous album covers. All of them have skulls on the front, which according to her, is entirely on purpose. “The cover of my albums always has to have a skull because it’s one of my primary symbols,” she informed MTV. “It represents based, disgusting dead humanity in the most basic form and it’s something that everyone recognizes — this idea of death no one understands but everyone is obsessed with.”

“The cover for Visions is probably the best piece of art I’ve made,” she admitted in the same interview, talking about her third album cover. “I think it’s technically proficient, super intense, laid out well, and it has a lot of meaning. It seems so agonized.” The drawing, she says, took 14 hours, and was fuelled by sheer terror after a horror movie binge. “I was hanging out in my upstairs neighbor’s house and we were watching really fucked up movies like Silence of the Lambs, Enter the Void, and The Shining,” she remembed. “So, I was totally distressed. I was too scared to go downstairs and we pulled an all-nighter. Within 10 seconds of sketching the skull, I was thinking it was a really good skull.”

Grimes' first album, 'Geidi Primes' meanwhile, is heavily influenced by Frank Herbert's sci-fi novel 'Dune,' and that extends to the deathly figure on the cover. They look a hell of a lot like a member of Bene Gesserit - 'Dune's secret sect of all-powerful woman who zoom around the planet making stealth mayhem, and taking lots of fictional awareness-heightening drug melange in the process. Not a bad choice when it comes to choosing creative muses.

Grimes has always been very vocal about her love of comics, and she’s also got involved in designing the cover for cultish series ‘The Wicked + Divine’. Kieron Gillen and Jamie McKelvie’s comic is all about pop stars who are reincarnated as members of a god-like rabble called The Pantheon. A bit like the Illuminati, then, but much more fun.

“[I’ve] been reading Image Comics since Spawn so my childhood self is extremely stoked,” said a clearly delighted Grimes, after teaming up with ‘The Wicked + Divine’ gang for an alternate reptilian cover.

Grimes has also posted in progress sketches of what she's calling a "Bosch influenced quasi comic". Hieronymus Bosch is an incredibly weird 15th Century artist who carved himself quite the niche in painting 3D effect landscapes of hell, filled with Biblical bobbins and scary, fantastical scenery. Boucher previously named him as a huge influence on her cover artwork for 'Visions'

Grimes doesn't just create art with her music in mind. She first started drawing at school in Vancouver after noticing kids with packs of Sailor Moon cards, and "started drawing because I was trying to draw anime." Over the years she's built up a huge collection of her trademark macabre comic sketches, which she's now planning on printing as free posters to give away at shows. She also sold her posters earlier this year to raise money for Canadian newspaper The Observer, in support of free press.

Grimes has a whole bunch of drawings on her online portfolio - check out just a few of them below. 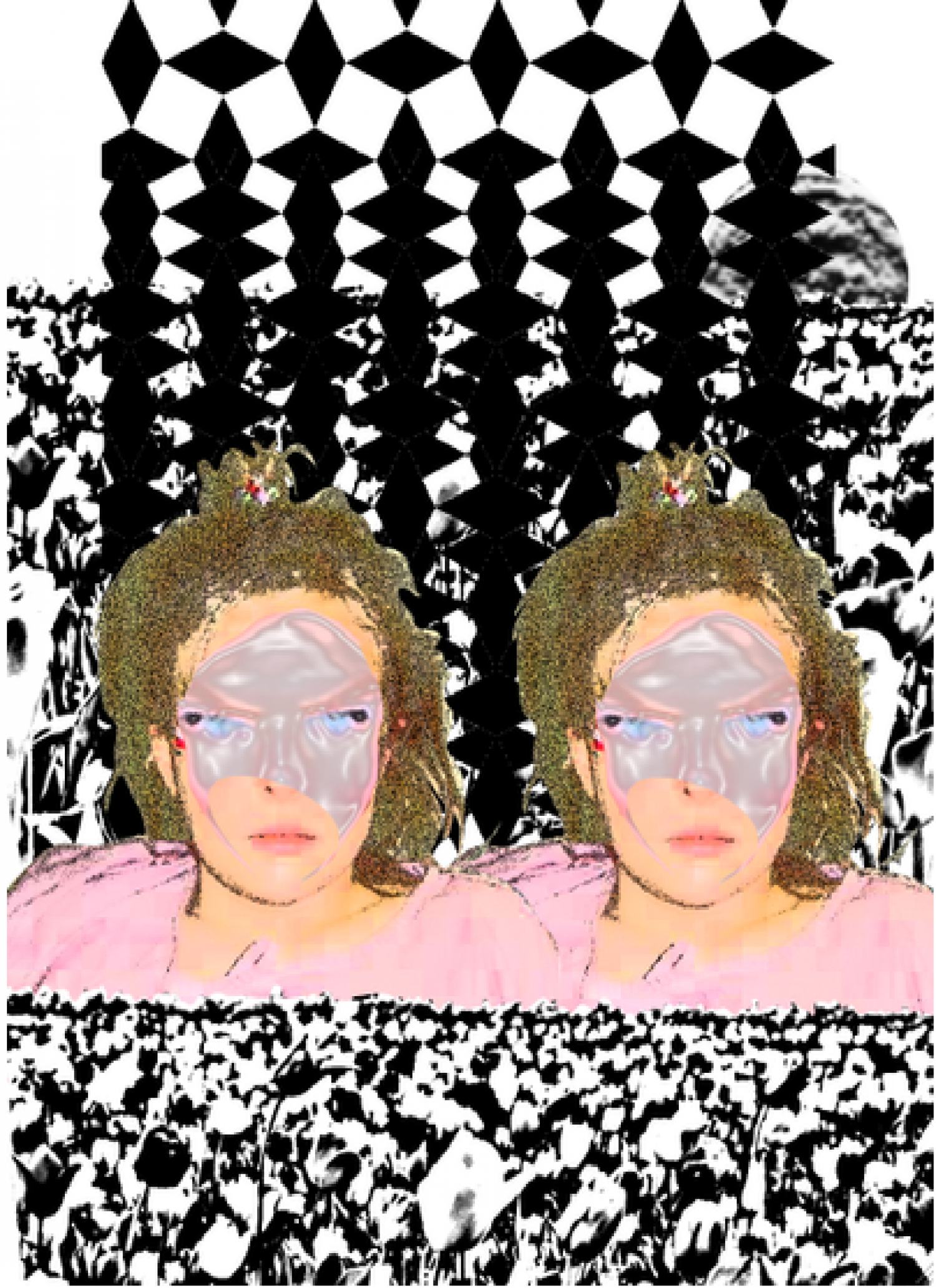 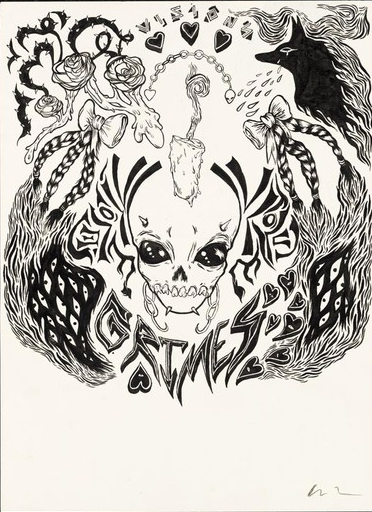 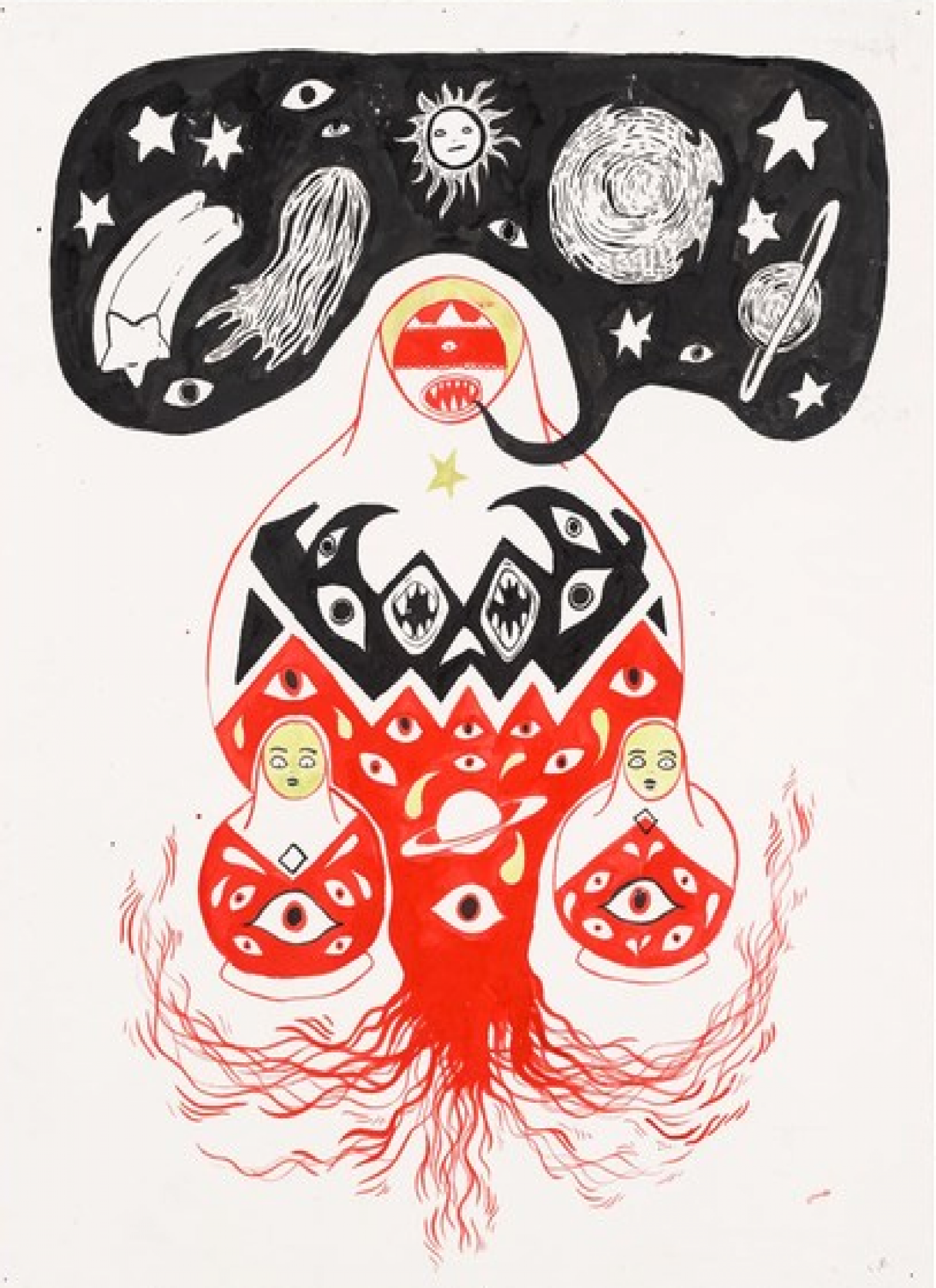 It's impossible to talk about Grimes' art without delving into the neverending labyrinth of madcap videos she's released in the past. From turning herself into a kind of desert-dwelling warrior spirit for one-off track 'Go,' to enlisting artistically minded rapper Brooke Candy as her own pink-braided chauffeur/official bodyguard in 'Genesis', she's had a go at pretty much everything. In 'Oblivion' meanwhile, Grimes dances cheerily among lagered-up blokes, and ignores weightlifting football players, swanning right through the middle of space after male-dominated space. In other words, there's an awful lot going on.

Along with announcing 'Art Angels,' Grimes also added that next week she'll be releasing the first video from the new album. On the evidence of her previous video output, goodness only knows what to expect. A Game of Thrones reboot filled with Adidas sandals? A journey to an 80s disco night on Mars? Pretty much anything is possible...