2017 was a year that saw Interpol looking back. Featured in journalist Lizzy Goodman’s ‘Meet Me In The Bathroom’ book, a comprehensive guide to the revolutionary, wildly exciting New York City music scene of the early 2000s, Paul Banks, Daniel Kessler and Sam Fogarino were quoted talking about their role in the scene that saw the emergence of The Strokes, Yeah Yeah Yeahs and LCD Soundsystem, as well as themselves, and how they became one of indie rock’s handful of new icons.

Later on in the year, the band took debut ‘Turn On The Bright Lights’ out on a 15th anniversary tour around the world, revisiting a record that remains resplendent in its bleakness, and serving up a reminder that the trio conjure a dark, deeply atmospheric musical cloud better than any other.

Either side of the anniversary tour, though, the trio were painstakingly crafting their sixth album, the urgent ‘Marauder’. Helmed by furious first single ‘The Rover’, the album is a return to form that reaffirms the band’s ability to weave raw, wintry music borne out of life’s dark underbelly.

Their last record, 2014’s ‘El Pintor’, served as a turning point, whether they chose it or not. Their first LP since the departure of effervescent bassist Carlos Dengler, it saw the band forced to rejig themselves as a taut, interwoven three-piece; a process of repositioning that frontman Paul Banks - who’s served as the band’s on-record bassist since - sees as having brought he, Daniel and Sam musically closer, making delicate but certain steps forward into new territory.

Paul - speaking on the phone from Mexico City - saw the latter stages of writing for ‘El Pintor’ as he and Sam “hitting on a new chamber of groove,” with the new-found connection flowing effortlessly through to album six. It shows, too: ‘The Rover’ sees Daniel’s trademark tinny guitars worm their way over rollocking waves of bass and drums that are intertwined impeccably. Highlight ‘Stay In Touch’, meanwhile, is a sprightly skip, an Interpol song that you can dance to, not just stomp a foot as before. “I feel like this entire record was the continuation of where we’d gotten to on the last one,” reflects Paul. “It feels like we’ve found our own new language and our own vibe together. I feel honoured to be part of a rhythm section with the great Sam Fogarino.” 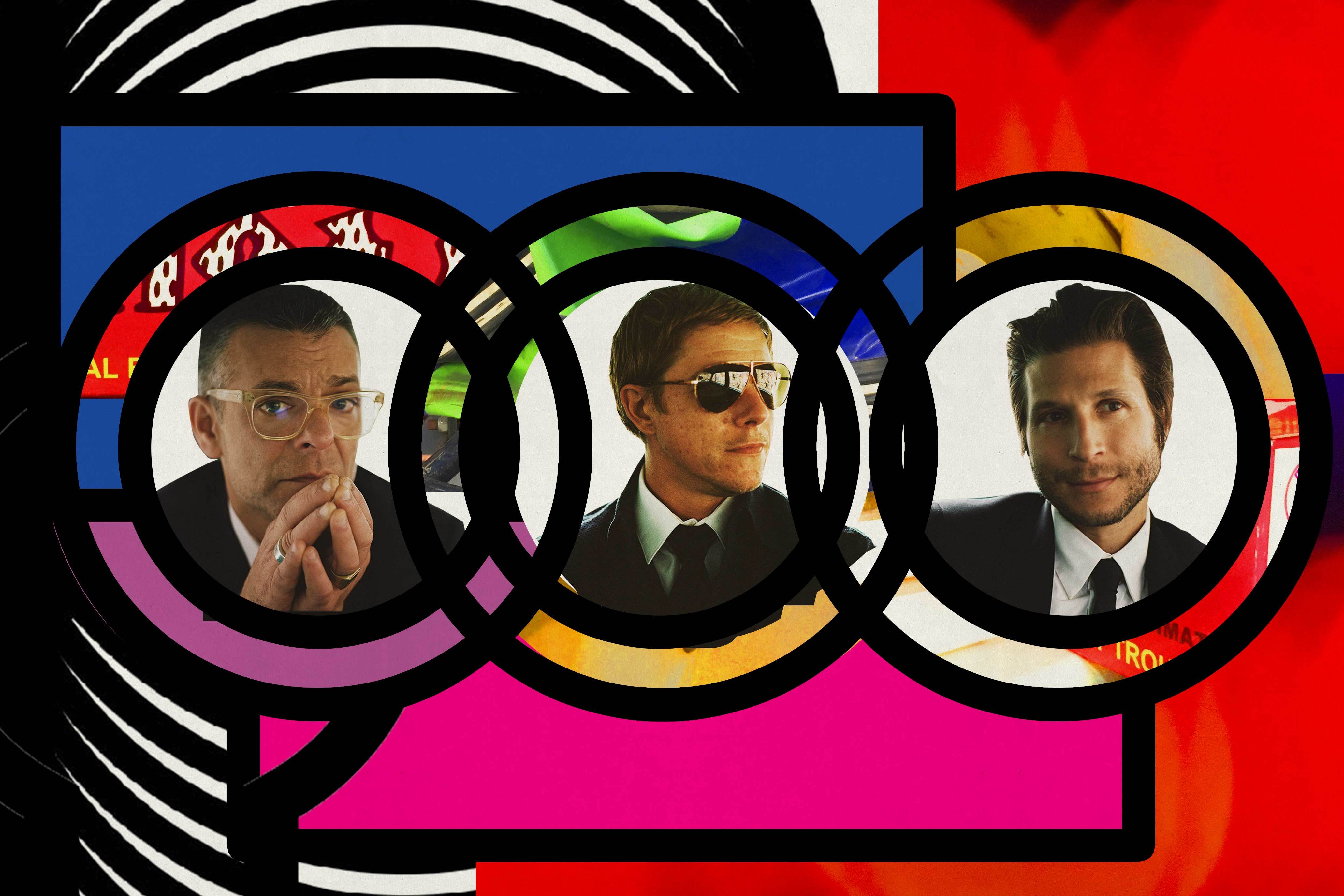 “Whenever you’re having your personal rampages - that’s the marauder.”

‘Marauder’ was crafted over a year or so in the Manhattan practice space belonging to the Yeah Yeah Yeahs, with sessions getting raucous enough for the band to have the police called by a disgruntled neighbour on one occasion. Though the band don’t now exclusively live in NYC - Sam resides in Georgia, while Paul splits his time between New York and Central America, and Daniel between New York and Europe - the band’s heartland is more often than not where they regroup to carve out new music. It also - for the band and fans alike - satisfies the clear romanticism of the return home for such a quintessentially ‘New York band’, ready to make their next steps.

Living in different places also allowed the band to schedule regular breaks into the writing process, taking time out, considering the work done, and returning to the creation, as Paul puts it, “without just the rose-coloured glasses of newness.”

One of these breaks was the ‘Turn On The Bright Lights’ tour, which saw the band playing their biggest shows yet - including an electrifying night at London’s Alexandra Palace - and found the ‘Marauder’ sessions injected with a newfound energy once the band returned from the road.

“It’d been a long time since we’d been on the stage together as Interpol, and getting that feel [back] by playing ‘...Bright Lights’ was a really good refresher,” says Paul, “and it gets you out of the mode of just being in a rehearsal room or a studio, and I think that residue of being onstage in front of an audience stayed with us as we came back, finished the record and headed into the studio. It paid off as far as how we were letting our new music settle in the backs of our minds while doing something else, and letting that live feeling permeate into the recording.”

With that defining debut in their back pocket, such an anniversary run could’ve easily seen Interpol slide into a new status as a nostalgia act of sorts, but the insinuation couldn’t be further from the truth. Heading back into the Manhattan writing room after the shows, the sense of belief behind ‘Marauder’ - and what Interpol are as a vital, forward-thinking band in 2018 - had never been stronger.

“I’m really fond of those recordings,” Paul reflects. “It was cool to check back in, as I think they’re a fundamental part of our DNA as a band, but at the same time, I’m a different guitar player now, and I’m a different singer now. I certainly like the old stuff, but I didn’t play the songs again and think ‘Oh I should go back on myself to what I was doing back then’. It was cool to check in with that material, but I still have that stoke of moving forward. I’d say to myself: ‘No, I do new shit now, and I like to believe it’s better.’"

“This is still a real, urgent compulsion that we can’t resist.”

As if to amp up the idea of newness even more, the trio - after lengthy discussions - decided to introduce a producer to the fold for the first time since 2007’s ‘Our Love To Admire’, teaming up with Dave Fridmann (MGMT, The Vaccines, The Flaming Lips) on fleshing out the songs that would become ‘Marauder’ at his upstate New York studio.

“We all came together and decided ‘Fuck it, let’s try something new’,” Paul lays out of the band’s motives for the link-up. “Fridmann can work with you if you have no ideas, sketchy ideas, or pretty completed ideas, and he had a great way of inserting himself into our process.”

As well as settling into their new skin as a three-piece, ‘Marauder’ sees Paul treading new lyrical ground, delving deep inside of himself to expose the darker facets of his personality. “It’s a childish, selfish facet, the marauder,” he lays out, the character bursting out of every vein of the claustrophobic album. “It’s always there in all of us to some degree,” he expands. “Rather than stomping it out in adulthood, I think it’s good to cultivate it and get it doing good stuff, given that there’s a lot of fire to that facet. Everybody has it, but maybe it’s mostly at the fore in adolescence and early twenties. Whenever you’re having your personal rampages - that’s the marauder.”

“I’m always looking inwards as a writer, and I’m always looking outwards as a writer, and I think [‘Marauder’] was a moment when the pendulum was swinging inward and that was what I was looking at - looking at my previous selves, into who I am now, and who I want to become,” he reflects in a matter-of-fact tone. It’s another sign of a band pushing forward. “I’ve always felt like I was trying to uncover things as a lyricist,” he continues. “I’ve always been trying to look inwards as deeply and honestly as I possibly could. I think maybe now the language just changed, rather than the pursuit.”

“[Ideas have been] flowing more freely as the years go by, as a lyricist,” the frontman responds, to the suggestion that mid-career stumbling blocks could easily present themselves, especially to a band with such an iron-clad identity. “Any writer, they develop their techniques, and I’ve had rough patches in my career, but now it feels very easy for me to access whatever sort of inner…” he continues before pausing and taking stock. “I don’t know, I can just tap into whatever place the lyrics come from more easily, and I’m more tuned into it.”

“In a pure creative sense, when you do this for a long time, maybe you’re gonna show up one day and say ‘Fuck, I don’t really have the gas for this anymore’, but I’ve not experienced that,” Paul concludes. “Fortunately, all of us seem to feel that this is still a real, urgent compulsion that we can’t resist. It’s not like, ‘Oh god, time to make a record, better get started!’. I think we all genuinely still feel like we have a shitload of things to say. I think [we] need this. It’s a by-product of the stress that you take in as being a person, and it’s an indispensable part of my life still, being a writer.”

'Marauder' is out now via Matador.