With its winsome falsettos and sun-kissed guitars and horns, Whitney’s debut ‘Light Upon The Lake’ was the perfect soundtrack to summer 2016. Though songs like ‘Golden Days’ and ‘No Woman’ dealt in themes of heartbreak and isolation, the band found a way to translate this pain into something warm and fuzzy; live, the result was like a reassuring embrace from a friend, one who’d seen some shit but come out on the other side.

But if ‘Light Upon The Lake’ was the perfect music for a summer road trip or a sunset festival cuddle, the band’s new album ‘Forever Turned Around’ feels more like the morning-after hangover. Where before there was a soothing nostalgia that permeated throughout, now there lies something heavier and more melancholic, an atmosphere that moves from anxiety to just plain paranoia.

“After the first album, we spent two years on the road and it took us a long time to feel like human beings again,” admits Whitney’s guitarist Max Kakacek, sat on a vintage sofa in a plush East London hotel room where we meet today. “There is a general anxiety in America right now [that didn’t exist when we wrote ‘Light Upon The Lake’], and if you’re writing songs it will naturally invade your space. There’s more restlessness on this record and I’d say it’s because of that backdrop.”

“One of my favourite lines on the record is ‘I don’t feel alive, but I’ve been living’, and that’s something that could apply to both our countries right now,” interjects a very hungover Julien Ehrlich, the band’s drummer and lead singer, his hoarse voice in dire need of a hot cup of honey and lemon. “In Britain you’ve had Brexit and in America we’ve had Trump, and we wanted this album to speak to those anxieties and how disconnected some people feel from reality right now.

“If you pay close attention to the lyrics then this record might take you to a dark place, but that’s what we wanted. We couldn’t just make the same album again. We wanted to show people that when they are in that dark place, in a relationship or whatever, they’re not alone. This might not be the most immediately rewarding record, but it grows on you and as you go through some shit in your life, it will be there waiting for you at the end of the day.”

“We want people to see the beauty in getting old.”

It’s been a long road for Julien and Max, the core songwriting duo at the heart of Whitney’s seven-man live operation. Their previous band Smith Westerns’ unique brand of lo-fi rock was at times, particularly on career-peak second album ‘Dye It Blonde’, a giddy rush of a listen - a psychedelic ode to the ‘70s, filled with sentimentality and swoons. But it was far less harmonious interpersonally, the pair describing their old bandmates as “kinda toxic” in a previous interview with DIY. This current iteration of Whitney, however, is evidently a much tighter band than Smith Westerns ever was, and that ease is reflected all over their latest work.

“We just all understand each other so well,” nods Julien, who points to new two-minute track-cum-jamming-session ‘Rhododendron’ - a charming stoner rock interlude which sees the band playing the fuck out of guitars, drums and trumpets - as proof of the band’s sonic chemistry. “We actually recorded that track while high on magic mushrooms. The conflicting instruments and sounds you hear were supposed to represent all the fun colours you see on ‘shrooms [that all somehow mesh into one].”

In the same way that psychedelic drugs can help you come to terms with the idea of your own mortality, album highlight ‘Day and Night’, with its beautiful strings and introspective lyricism (“There’s an end in sight!”) is about helping Whitney fans come to grips with the concept of growing older. It feels like it was made for someone staring down the barrel of 30 and in dire need of some comfort. Max explains that the band were using the studio as a confessional booth, but were mainly trying to channel the emotions of feeling burned out while playing to kids a million miles away from home in Chicago.

“It is hard to make music that’s therapeutic, so we’re really proud that we could do that with that particular song,” he says. “If you are struggling with the idea of growing older or being away from home, or whatever, then those kind of songs will make so much more sense. This is definitely our coming of age album. We want people to see the beauty in getting old.” 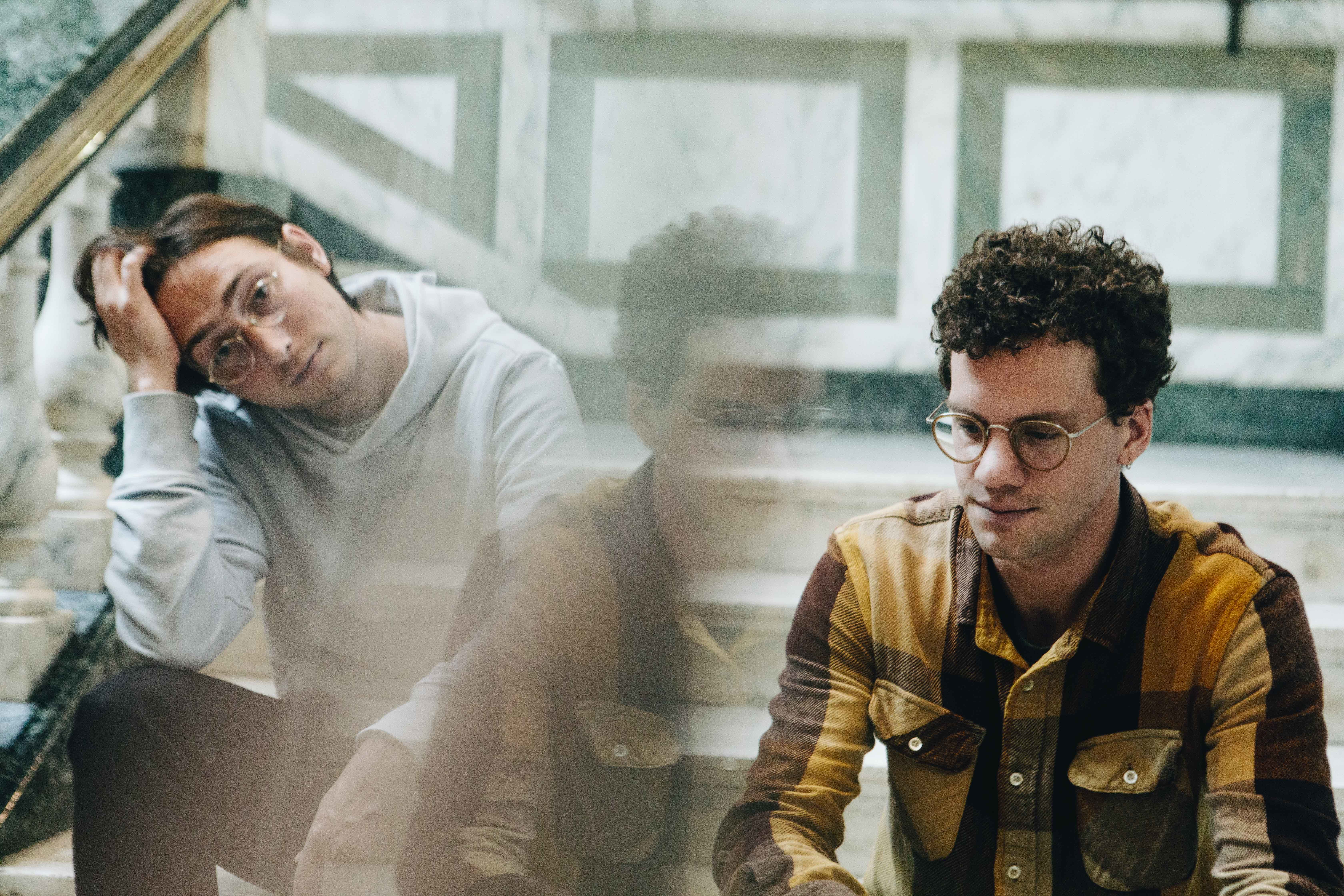 “As you go through some shit in your life, [this record] will be waiting for you at the end of the day.”

We’re not asking Whitney to soundtrack a raging rebellion, we just want them to make us feel things.

So often rock music deals with the idea of falling in love but, with ‘Forever Turned Around’, Whitney are more concerned with love withering away. First single ‘Giving Up’ and the somber ‘Used To Be Lonely’ deal with how hard it is to maintain a healthy relationship when it feels like your partner is gradually slipping out of your grip. On the latter, Julien mournfully sings “I’m afraid you’re letting go”, and you can feel his despondency right there in the pit of your stomach. “‘Used To Be Lonely’ definitely deals with the negative aspects of being in a stable relationship and the anxiety that comes along with it,” nods his bandmate today of the track.

The record as a whole, meanwhile, speaks to the idea that just because something looks beautiful from the outside - whether that’s a relationship, a country or even a band on tour - that doesn’t mean that it’s not sometimes ugly on the inside. On ‘Valleys (My Love)’, Julien tellingly sings about “Pretending everything is alright / But we’ve been drifting apart for sometime". The idea of living good yet still feeling disconnected from your surroundings or partner is a constant theme.

But if this all sounds rather heavy and a radical departure from the Whitney the world fell in love with then, rest assured, their trademark joyous, seratonin-boosting flourishes of folk pop are still present. Songs like ‘My Life Alone’, with its ‘Hey Jude’-esque “na, na, na” section, will surely prompt mass sing-alongs on live stages, while the band still know when to throw in a bouncy horn section just as things are threatening to get too serious.

“The new album definitely has lighter moments,” says Julien. “‘Giving Up’ is about finding optimism, that there’s this brighter side to the aspect of giving up. A song like ‘My Life Alone’ reflects the fact we’re both students of 1970s songwriting. A lot of the time it is that era that speaks to us the most.

“With songwriters like Neil Young, you could strip down his songs to their most basic form and they still worked. We intend to do that with this new music. We’d like to tour it without a band and just play it acoustically as a pair.”

By way of extra comfort, Julien adds, “I think with album number three, we will definitely swing back into a happier place.”

Above all else though, ‘Forever Turned Around’ - an album that both believe marks a maturation in their songwriting - is about ripping up the blueprint of a modern classic and following it with something that sounds both familiar and new. This time, they want to have a real conversation with their fans and go beyond just making them smile. As Julien explains: “There are multiple ways to view the album title. For me, it’s like how, when you were a kid, your dreams were endless. I felt like I could one day be the president, or play pro basketball, but you ultimately reach an age where you realise that’s not going to happen. It is depressing coming to that realisation and having that conversation with yourself, so we want to help."

Aware this sounds like one of the most emo things ever uttered by a human being, he giggles, before adding: “But not even in a sad way! It’s healthy to have this conversation. There’s something beautiful about realising you’re probably not going to grow up like that.” For Whitney, the traumatic coming-of-age moments we all experience are actually among the best; they’re when we feel most alive.

'Forever Turned Around' is out now via Secretly Canadian.