Foo Fighters have cancelled their scheduled headline appearance at Glastonbury 2015.

Following a broken leg suffered by frontman Dave Grohl, all UK and European dates have been cancelled, including Wembley Stadium.

Glastonbury have yet to announce a replacement headliner, or if Florence + The Machine will be bumped up the Pyramid Stage to a headline slot. As reported earlier today, Emily Eavis says the festival had a contingency plan in place, if Foos were to pull out. “A new headliner will be announced soon,” the festival says.

Grohl’s injury occurred over the weekend, when the frontman fell off stage in Gothenburg, Sweden. Two dates were immediately cancelled at Pinkpop Festival and in St. Gallen, Switzerland.

Below, you can see Grohl’s letter to fans in full, going into the grizzly detail of his injury before giving props to Kanye.

The newly affected dates are as follows: 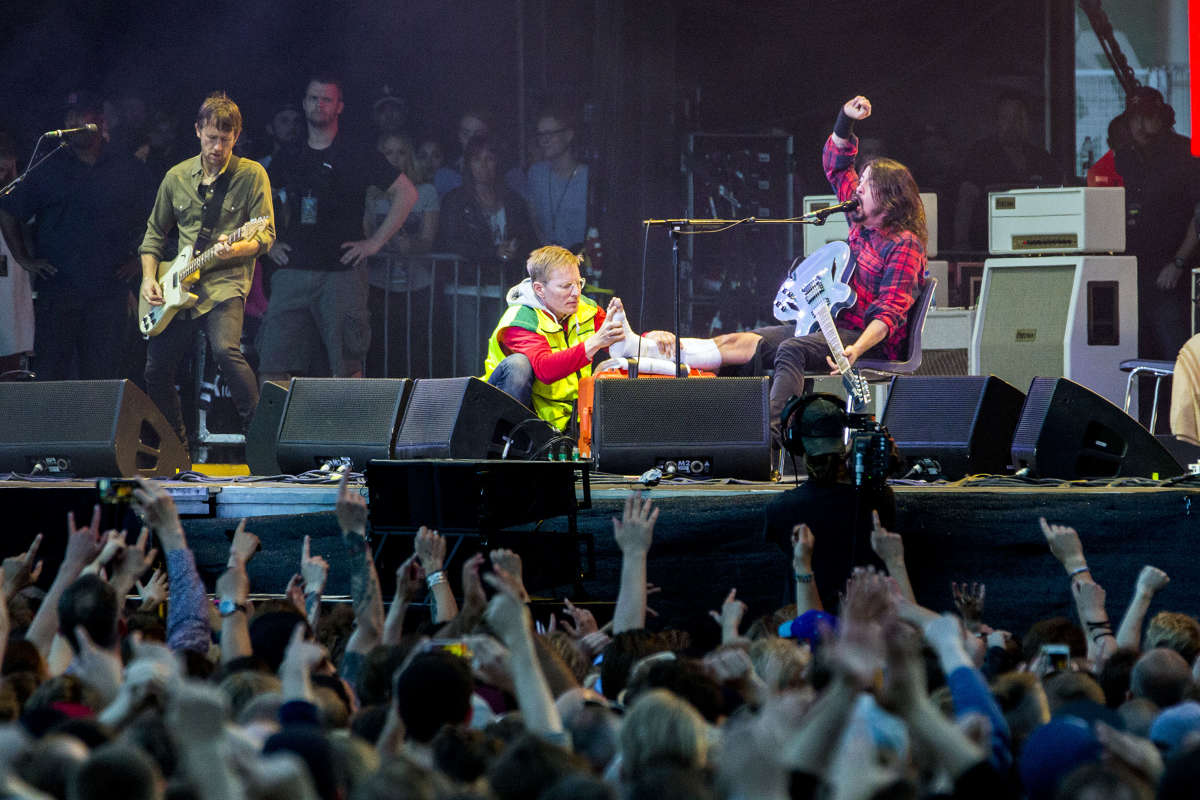 Your old pal, Dave here. Been a while, eh? It’s been one hell of a year, that’s for sure. Looks like we’ve got some serious catching up to do! Hmmm, let’s see…..where do I begin?

The funniest thing happened to me the other day in Sweden!

Two songs into our set at Ullevi Stadium in Gothenburg, I made a mad dash to the right of the stage during MONKEY WRENCH to shred some tasty licks for the kids up front. It was a beautiful night, beautiful stadium, 52,000 screaming people….dream gig! Well….wait for it….I definitely shredded something (ZING!) Wound up feet first over the Edge (pun intended), dropping about 12 feet, dislocating my ankle and snapping my fibula like an old pair of take out chopsticks. Whoopsie daisy. Not good. Without realizing the extent of my injuries, I stood up to get back onstage and crumbled like a sack of Joe Theismanns (look it up, kiddies). That shit was B-R-O-K-E.

As I lay there on my back, I just thought, “Are you kidding me? We haven’t even gotten to the screamy bit of the song and the gig is fucking OVER?” So, I asked for a microphone and told the audience I’d get fixed up and come right back to finish the show ASAP. Shock? Probably. But, I couldn’t stand the thought of such a perfect night going to waste! I looked at our drummer Taylor and said, “Bust out some Chevy Metal covers while they fix me up!” So, as the band kicked in to “Stay With Me” by The Faces, the medics poured me onto a stretcher, took me off to the side, cut my favorite pants off (so bummed) and popped my ankle back into place. I asked if I could get back onstage to finish the show, but they said I needed a cast (which was 20 minutes away at the hospital) to hold my ankle in place. So I looked my EMT, Johan in the eyes and said “Well, then you’re coming up there with me right now and holding it in place until they can bring the cast here. Ready?” He stared at me wide-eyed for a second and said, “OK, lets’ go…”

Like clockwork, the cast arrived, I walked offstage for a song or two as they put it on me, and then came back to finish the gig. Let’s just say that singing our song “Walk” with a straight face was pretty goddamned hard. “These Days” was a good one, too. (Easy for you to say! Your leg has never been broken!) All in all, it was without a doubt the single most bizarre Foo Fighters show in the entire 20 years of being a band. Hands down. What seemed like a tragedy at first turned into a triumph, and we all walked away with a new sense of appreciation for what we’ve got…

Straight to the hospital for x-rays, where we finally saw the extent of the damage. That’s when things got really real. I was told I needed surgery to fix the break. I decided to fly back to London and find a doctor that could see me ASAP. (Thanks for the recommendation, Paul!) An MRI and a few x-rays later, we set a date and prepared for the operation.

Operation went well. Had a great team and nice stay in hospital. Good curry, too! Thank you to everyone involved.

So….here I am, recovering with 6 metal screws in my leg, thinking about a lifetime of holding up TSA lines from here to Kalamazoo….damn.

Here’s the not so witty bit…….My doctors have advised me to lay low for a while. The most important thing now is for me to recover from the surgery, to keep my leg elevated so as to keep swelling down and prevent any infection/complication that could do long term damage. I’m not out of the woods yet, folks…

Which means, and it kills me to say it…..the doctors have told us to cancel shows. I’m really so sorry, guys. You know I hate to do it, but I’m afraid it’s just not physically possible for me at the moment. We’re doing our best right now to work out a plan, so bear with us. You know we’re good for our word. But for now, I need to make sure we have YEARS of gigs ahead of us….

You have always stood by our band, and we will always stand by you. Like I say at every show, we wouldn’t be here if it weren’t for you guys. And I mean that. I thank you from the bottom of my heart. And I will do everything I can to come back and give you a night to remember for the rest of your lives AS SOON AS POSSIBLE.

WOOZE - Get Me To A Nunnery