“Someone feeling anything after hearing our songs is the most beautiful thing,” beams Elena Tonra, responding to her bandmate Igor Haefeli recalling times Daughter have been approached by fans affected by their music.

“People would come and see us after shows and say ‘your song has expressed a feeling I’ve had that I haven’t really been able to put my finger on’, and that’s an amazing thing,” he remembers. “Whether that’s what the song was intended for, or carries the same meaning for us as it does for the fan, is a completely different question - but anything that helps them understand, or realise that they’re even feeling something at all, is great.”

It’s not difficult to see why fans are getting caught up in Tonra’s tales. 2013 debut album ‘If You Leave’ took the bubbling sorrow of the band’s twin EPs and sent the message head-first into full-on agony. It was, and is, a cripplingly sad album, but one that struck through the pain with Haefeli’s sky-reaching, reverb-drowned guitars, offering hope and an escape.

When the bulk of the ‘If You Leave’ tour was completed at the start of 2014, Tonra, Haefeli and drummer Remi Aguilella started to collate the many “scattered bits of paper” that had been hurriedly noted down in soundchecks and dressing rooms far from home into fully formed ideas back in London.

“It was the first time for us that, lyrically and musically, the album grew hand in hand.”

Work began after a much-needed break around Christmas 2013. “We consciously decided not to tour for a while and to start working,” explains Tonra. “I remember when we were on the tour we already had some guitar ideas floating about, and we’d jam them in soundcheck, but it never felt like we fully dived into it until we were like ‘right, brains are clear of touring, let’s get into it!’”

The short time away, the band’s first in over a year, might not have allowed them freedom from becoming embedded in ideas for LP2 - “even if we have holidays we’re still emotionally ‘in the band’” - but it allowed the ‘Not To Disappear’ process to have a defined starting point. ‘If You Leave’ brought together tracks from since the very beginning of Daughter, borrowing ‘Youth’ from ‘The Wild Youth’ EP, and Haefeli sees a greater togetherness between the ten songs because of this.

“We were being a bit more direct. It was interesting, as it was the first time for us that, lyrically and musically, the album grew hand in hand. It wasn’t about adapting to one another, it was about seeing it progress together.” 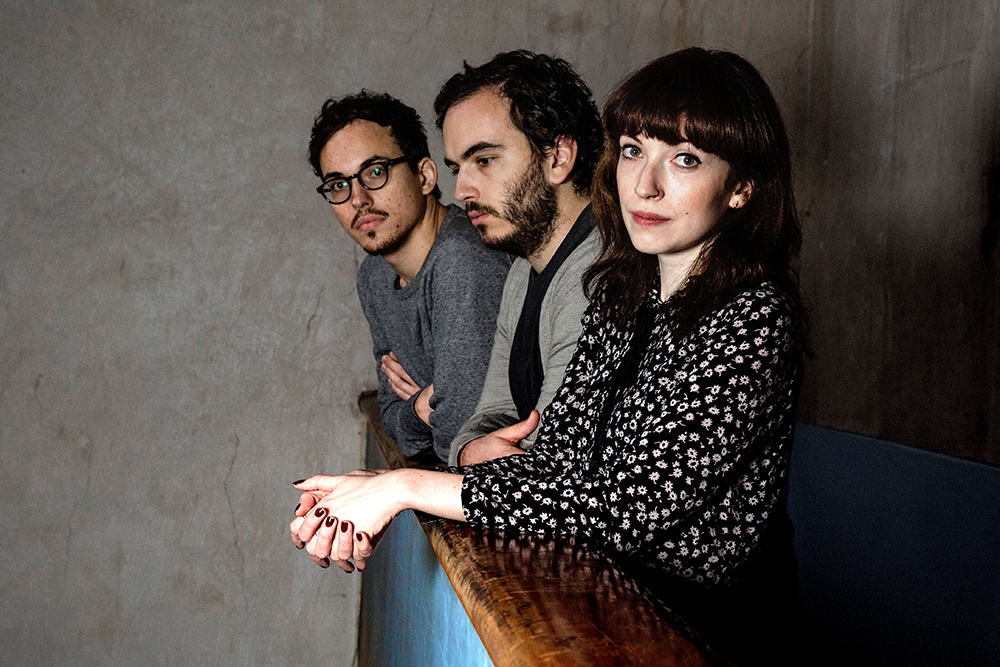 A greater anger and aggression is something that bursts out of certain corners of ‘Not To Disappear’, and Elena recalls recording vocals for album standout ‘No Care’ by following the existing guitar line and improvising her anger into verse. “We had this guitar loop which was very distorted and sludgy, and that song was a case of me pressing record and just spilling. That wasn’t even written down, just ranted out. I think it feels a bit like that too, just spitting out words.”

After more time laying down ideas and demos in Tottenham, the band de-camped to New York at the beginning of summer 2014. The main reason for heading to the city was to live and work with producer Nicolas Vernhes, who has previously worked with Deerhunter, Animal Collective and The War On Drugs, at his Rare Book Room studios in Brooklyn.

Tonra cites producer Vernhes’ studio itself as being a big influencer in how ‘Not To Disappear’ turned out. “All of the stuff he has is brilliant. Just being in his space with all of his tools is already quite a magical thing. Going into someone else’s space - and it literally is his house as well - and having all this gear at your disposal was wonderful. It was like a treasure trove. I’d think ‘woah! what’s this?’ time and time again. I think you can hear him and his essence in the record, which I love.”

“Because you’re playing in front of a bigger audience, you tend to play a little heavier, and the songs get more intense.”

The band speak of ‘If You Leave’’s “bedroom-y quality”, and cite their ascent to bigger venues and festival stages on its tour as a reason for the mightier tones on ‘Not To Disappear’. “Because you’re playing in front of a bigger audience, you tend to play a little heavier, and the songs get more intense,” explains Aguilella. “[At festivals,] you’re never entirely sure how people are going to react or if the crowd are going to be quiet enough to hear what’s happening. It would have been very interesting to see what ‘If You Leave’ would have sounded like if we had recorded it at the end of the cycle.”

Tonra’s words have largely become the focal point of Daughter as a band, and a greater honesty was something she tried to convey with the lyrics on ‘Not To Disappear’. “Looking back at ‘If You Leave’, it feels like the songs were hiding behind a curtain of imagery and metaphors, and not quite saying ‘okay this is how I feel’. I think ‘Not To Disappear’ is a lot more bare in that way.”

Beginning an album with a song titled ‘New Ways’ could easily have been the main statement of intent from Daughter and their new album. Instead it was the record’s first single, ‘Doing The Right Thing’, that became the ‘moment’ of Daughter’s second age. The song honestly and brutally dissects feelings of worry and loss associated with dementia and Alzheimer’s. It’s one of the biggest, toughest subjects to tackle, not to mention to then release as the first single.

“I never sit down and think ‘I’m going to write a song about this’, so when ‘Doing The Right Thing’ happened, that was a really odd one. It started feeling like it was about one thing, and then really quite instantly drifted into being about my Grandmother and trying to see the world from her perspective. That in particular was something I didn’t realise I was so affected by until I saw it coming out in these songs. I’d stop halfway through writing the song and realise ‘oh, I’m actually very sad about this’.” 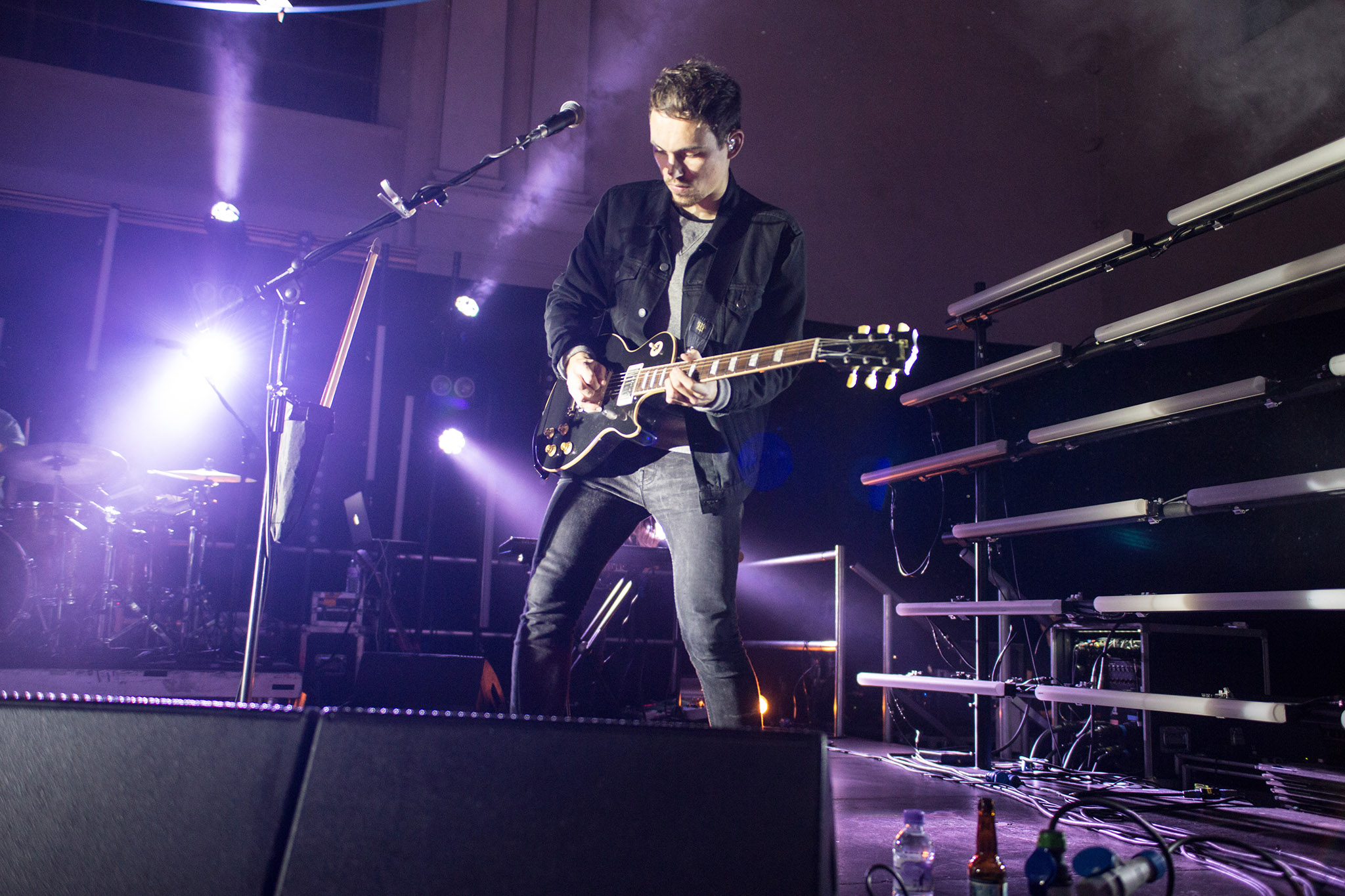 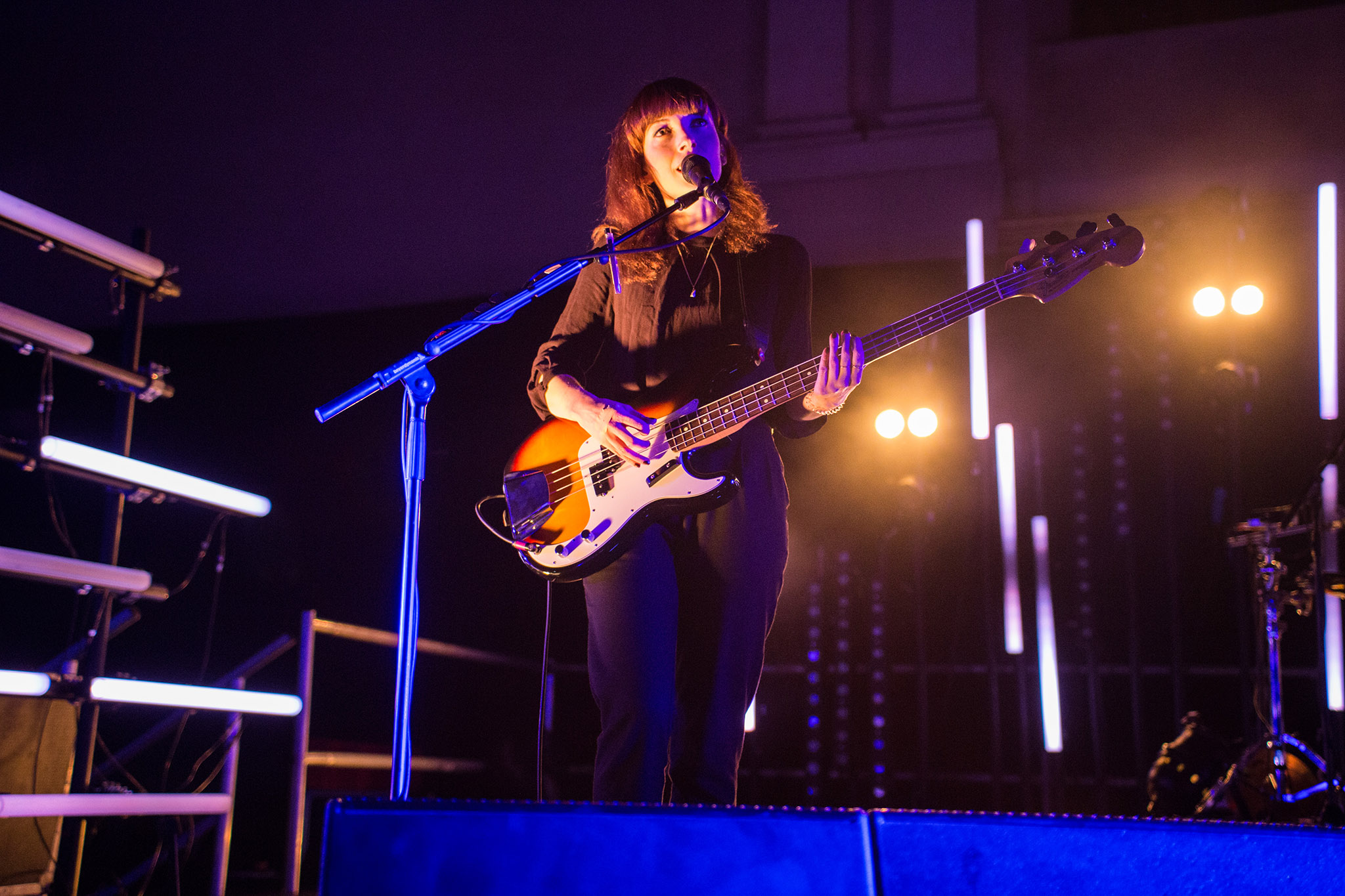 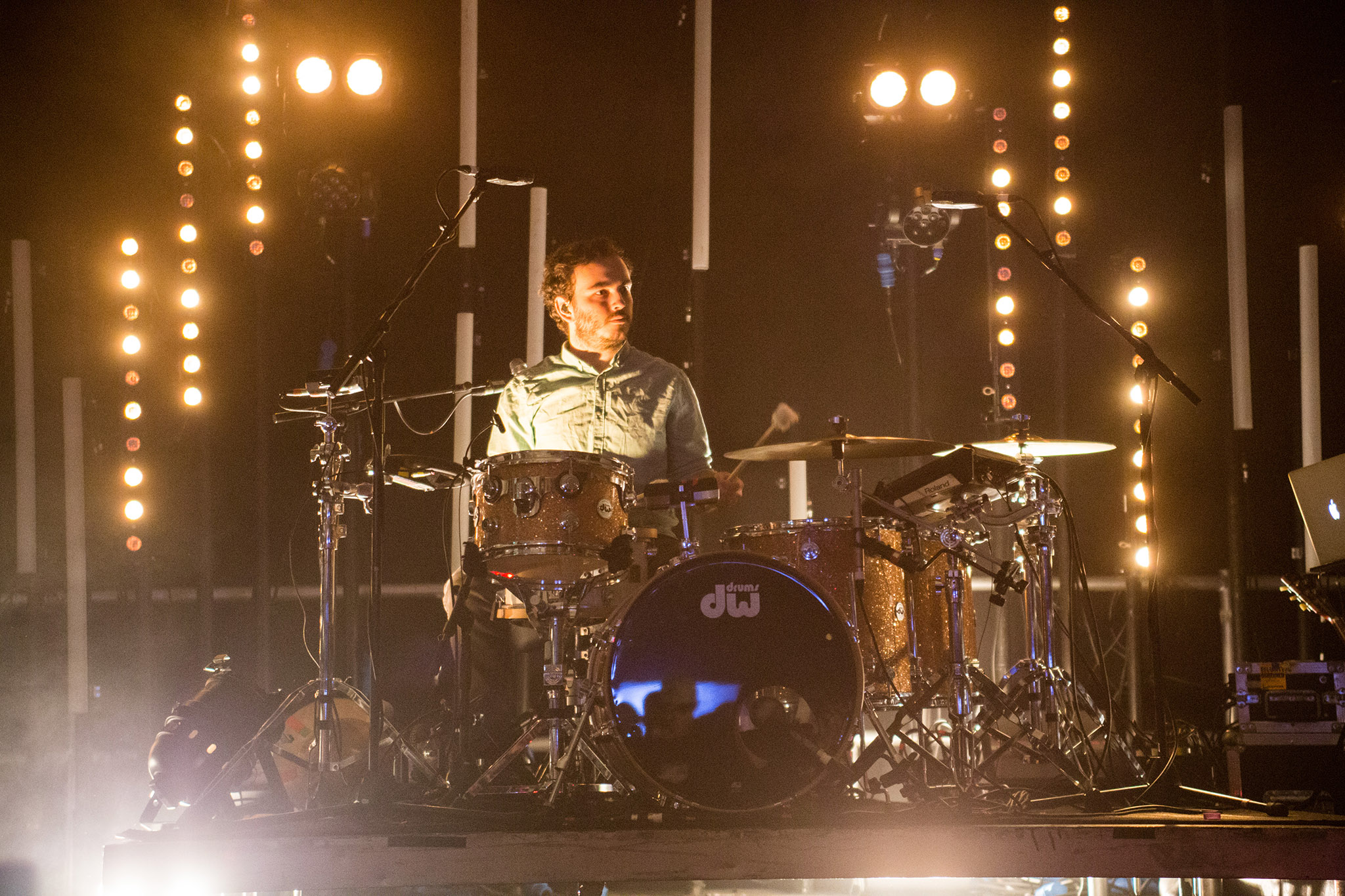 Family is a theme tied to multiple Daughter songs, and the entirety of ‘Not To Disappear’. It can also, of course, be traced back to the band’s name. It’s a testament to Tonra’s sincerity that she largely didn’t even notice such a lyrical pattern was forming on the album, just writing what she felt. “I reference them a lot. Even in the first album they would crop up in unexpected scenarios. I’d be writing a song that wasn’t even about them and then think ‘oh hey Dad, what’s going on?’ That happened a lot this time, especially with my mother and my grandmother. They crop up frequently, and I’m going through a time where they’re on my mind a lot, especially my grandmother. I connect a lot of my thoughts to the idea of family and family members. It’s the women in my family on this record. Which is cool. They’re pretty badass.”

Tonra also explains the way “that feeling where you don’t really have anyone when you’re on the road” also formed a lot of the subject matter on ‘Not To Disappear’. “There’s certain people who you stop and think, ‘I am so far away from you’, and you can Skype someone or whatever, but it’s not the same.” It’s something Igor can also attest to.

“With the feeling of loneliness on the album, the way I related to it was through memories of touring, and feeling alone in huge, unfamiliar cities, even while surrounded by people. You feel quite alienated: you stand in front of a really warm, appreciative crowd for an hour who make you feel great, but most of the time you’re trying to find your place within these massive venues. Even sonically, we used the idea of pushing electronic sounds, and using metallic, harsher reverb which contrasts with the more warm, organic sounds and live drums. It’s creating a sense of thinking, feeling, being while having all this man-made stuff around you.” 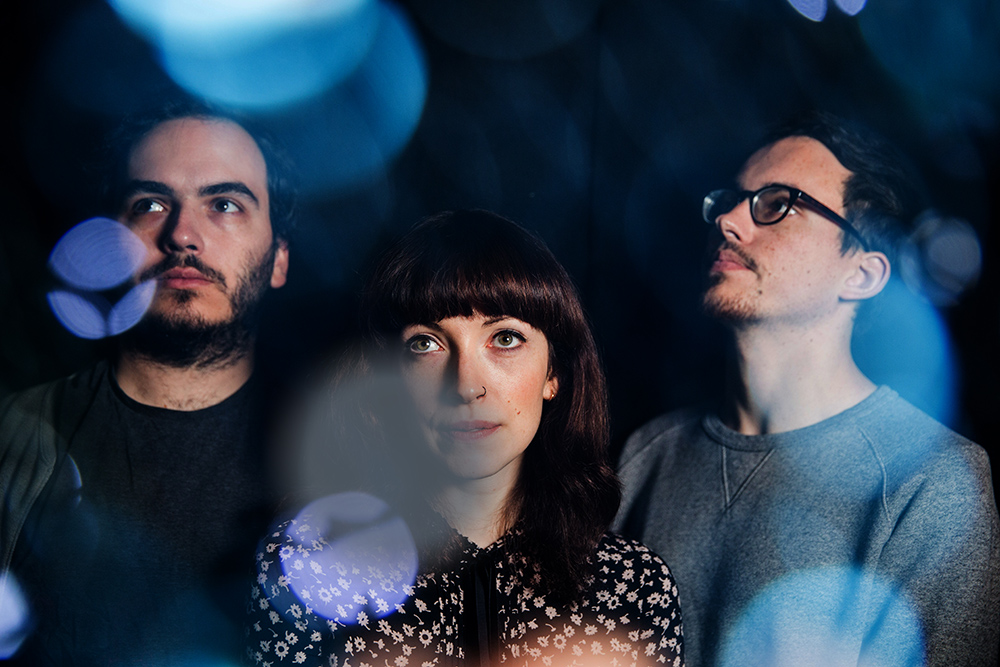 Along with the droves of fans who tell Tonra how much they relate to her words, she speaks of using them herself for retrospective self-analysis. “The [songs] I’m most drawn to are the ones that are the most emotional for me, but I don’t realise a universal theme is unfolding until you look over the whole album and go ‘oh, cool, most of these are about how lonely I feel in different situations’. What’s quite cool about that - in a weird way - is that I can look back on old songs and see how I was feeling at a certain time, which is a good study of your own brain and development as a person. It’s a weird therapy, where you can look back and see what you did right and wrong, and what you were really thinking.”

It might take Elena Tonra years to personally dissect ‘Not To Disappear’, but the sentiment is so strong, and the messages are so important, that it will surely affect many more before her.

Photos by Emma Swann and Caroline Quinn. Daughter’s new album ‘Not To Disappear’ is out now via 4AD.

Taken from the February 2016 issue of DIY, out now - order a free copy below.