Here’s a question: what would be the ideal warm up for a band like Savages? True to the festival’s diverse nature, the answer in this case probably isn’t what you’re expecting. Eden Lewis opens up the Heineken Stage with some old-school funk and soul jams. Although there was plenty of full bass and uplifting highs, it might have been a bit too early in the evening for the chilled, mostly seated crowd to get up and dance in the way they might have hoped. LOT’s downtempo electronica fitted the overall mood a little better with their pulsing synths, a small smattering of guitar and moody vocals. Sometimes it all blends into a bit of an indistinct mass. It was perfect for the few members of the audience content to lie back and let the waves wash over them, slightly less stirring to get properly in the mood for a Friday evening though.

And so to Savages themselves, who thunder on to the stage in a blaze of squalling post-punk riffs and pounding drums. Jehnny Beth completely commands the stage, even when she starts off rooted to the spot by the mic stand, spotting her words on ‘Sad Person’ with more than a lethal dose of venom. When she becomes mobile, she barely has to gesture to get the crowd to clap along to the pulsating drums on more than one occasion. By the time they get to the quick-fire ‘When In Love’, she’s already got up close and personal with the front row and made the suggestion that everyone lets go (although they probably don’t need any permission to do so and a mosh pit soon forms). It isn’t just her that’s completely magnetic though. A one-two punch of ‘No Face’ and ‘T.I.W.Y.G’ is so filled with unbridled aggression that the riffs have the power to melt faces. There’s no better end to their set than ‘Fuckers’, an audible signal that there’s absolutely nothing keeping Savages down. 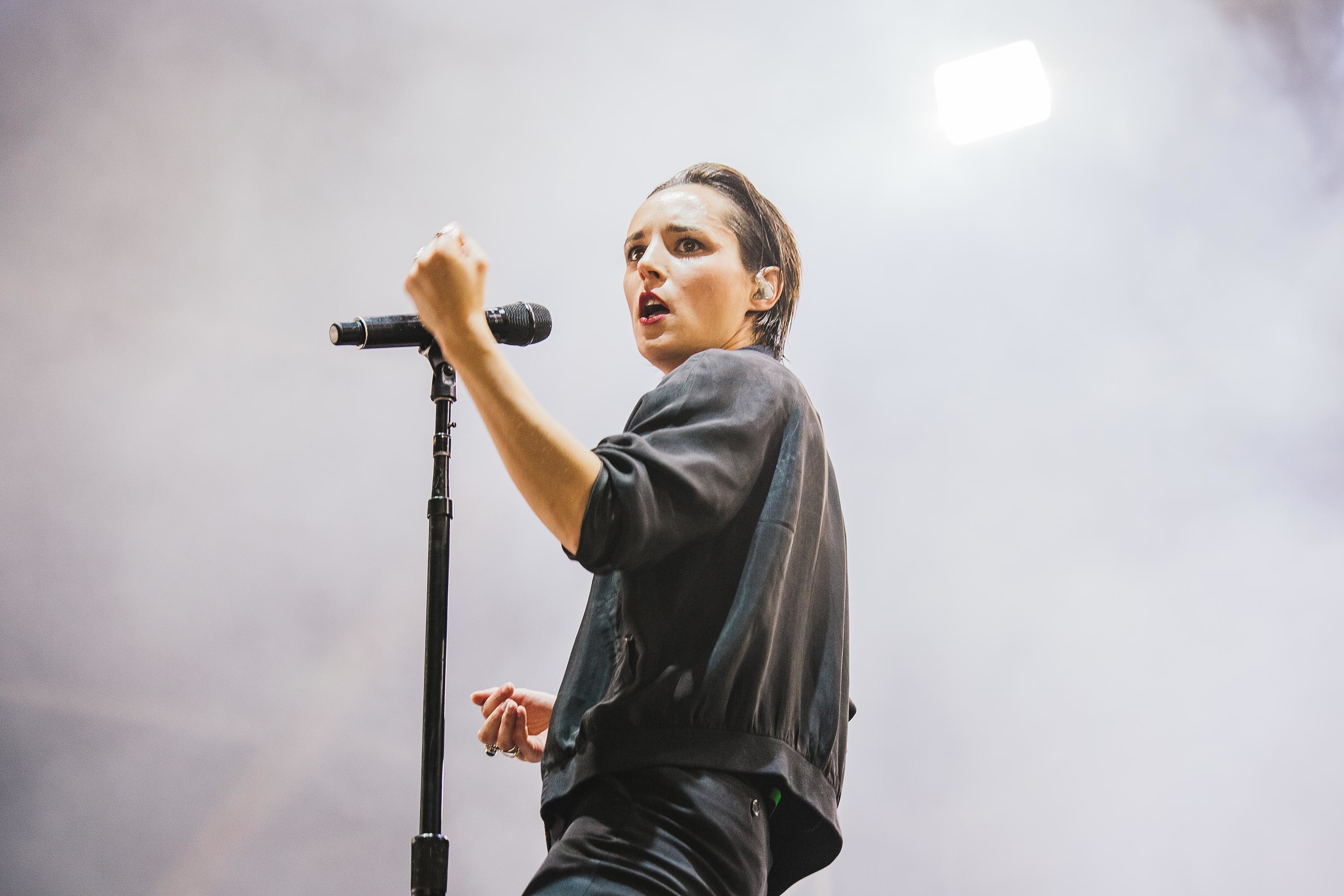 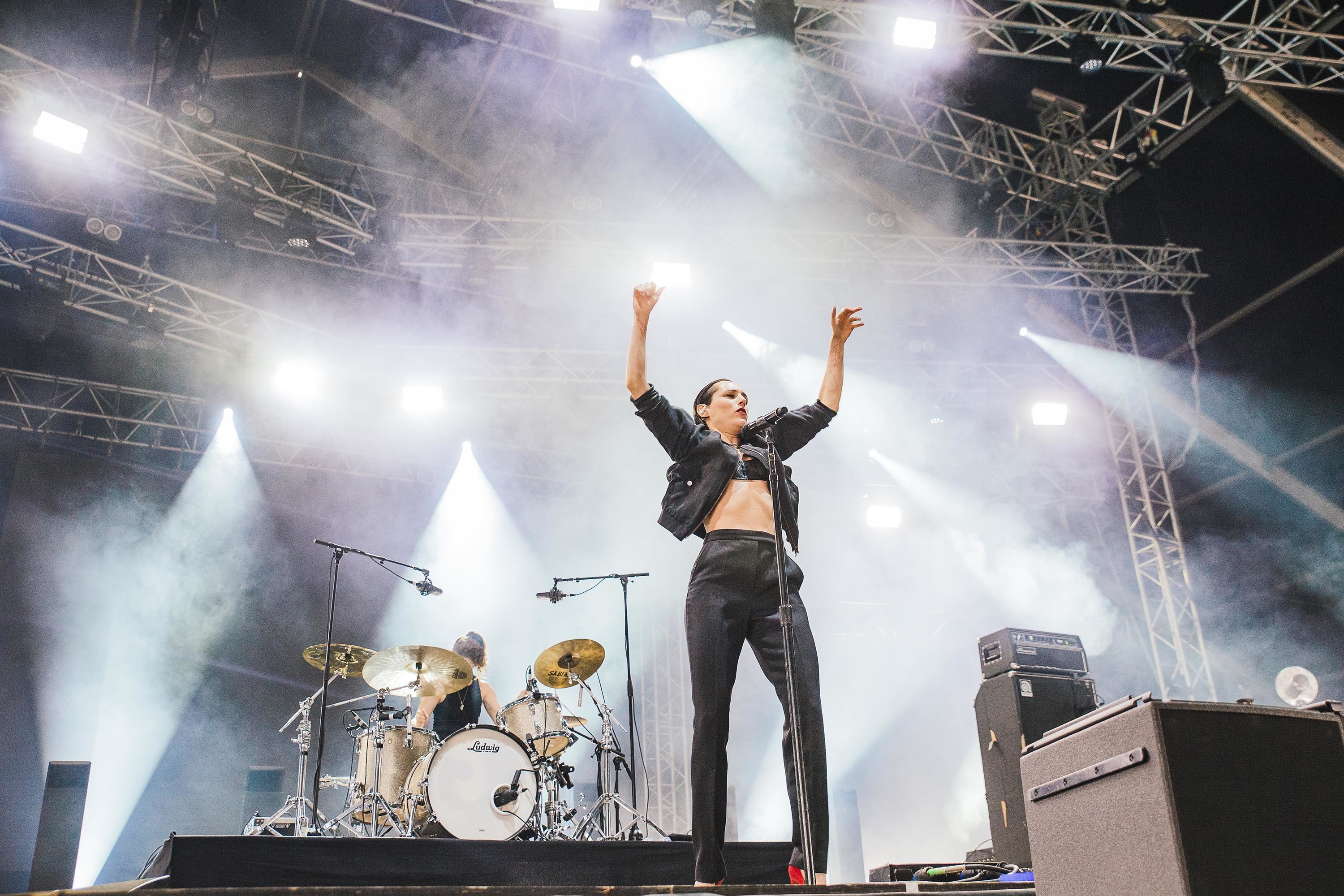 It's an extremely tall order to follow them, and not a task to be envied. Still, Warpaint are determined to try inside the rammed stage. Just as a heads up, it's not as immediately arresting, but they offer a very different kind of hypnotism. Instead of a full-on assault on the senses, they deliver guitars that soar and lilt in equal measure, the pinnacle of which comes with 'Undertow'. But while the melodies and intricacies are just about pitch-perfect, their usually tight harmonies seem a little washed out by the power of the bass and Stella Mozgawa's complex, rhythmic drumming, drifting almost into the background. That doesn't matter so much when they bring out 'New Song'. Its upbeat, poppy charm easily papers over the minor cracks.

After two bands made up of empowering women, hearing the machismo of Wild Beasts' 'Big Cat' feels strangely jarring. While they prowl on stage and Hayden Thorpe growls his lines, it's also a curiously tame start. They quickly hit their stride thereafter, launching into 'We've Still Got The Taste Dancin’ On Our Tongues', its cacophonous rolling drum beats and Thorpe's ethereal falsetto making the audience swoon, while 'Bed Of Nails' is still as romantically seductive as ever. 'Hooting & Howling' gives the set its first clap-along moment and a soaring climax with reverberating riffs, but with a slightly smaller (albeit devoted) crowd and a few less immediate moments, they might not quite have claimed their crown just yet. 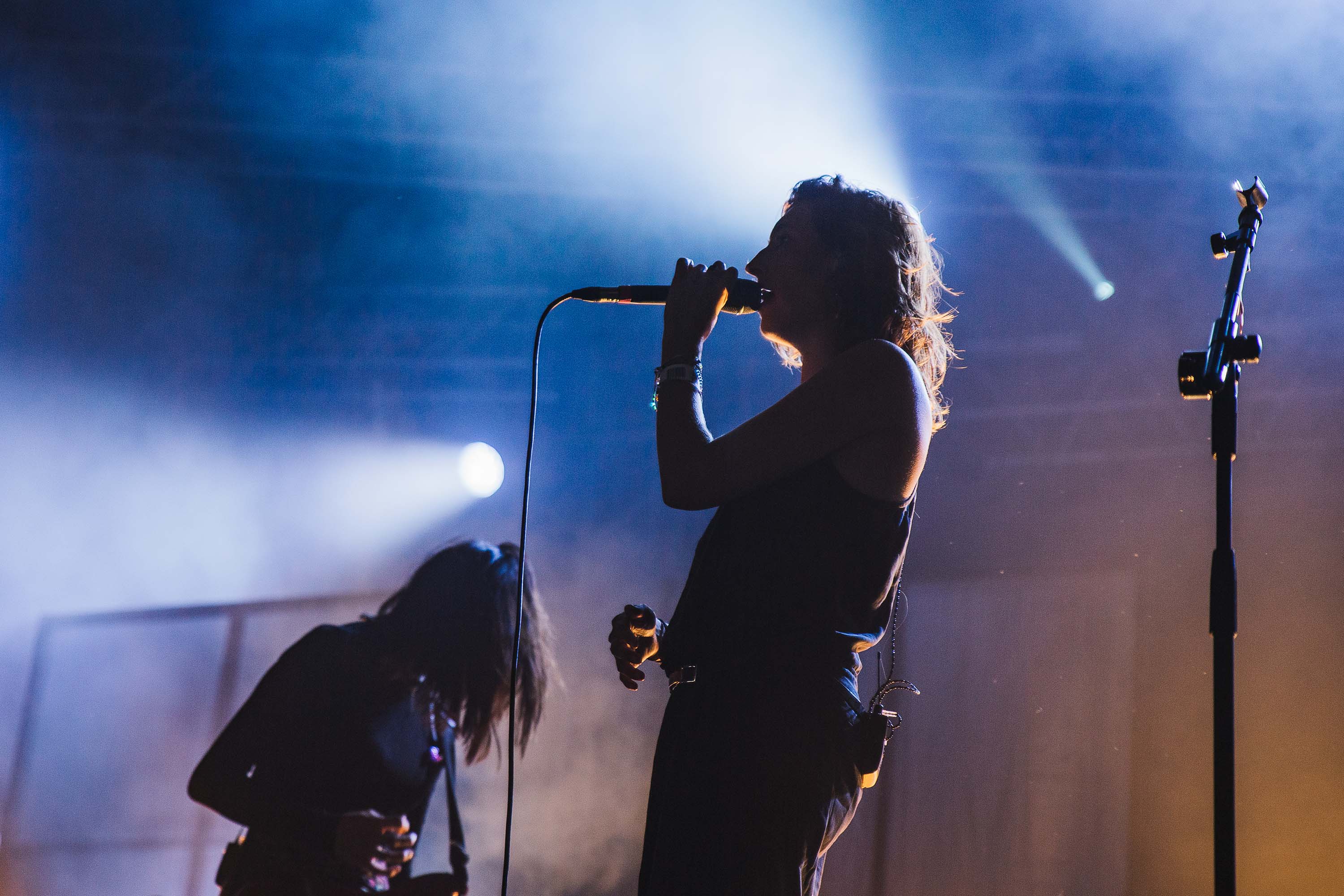 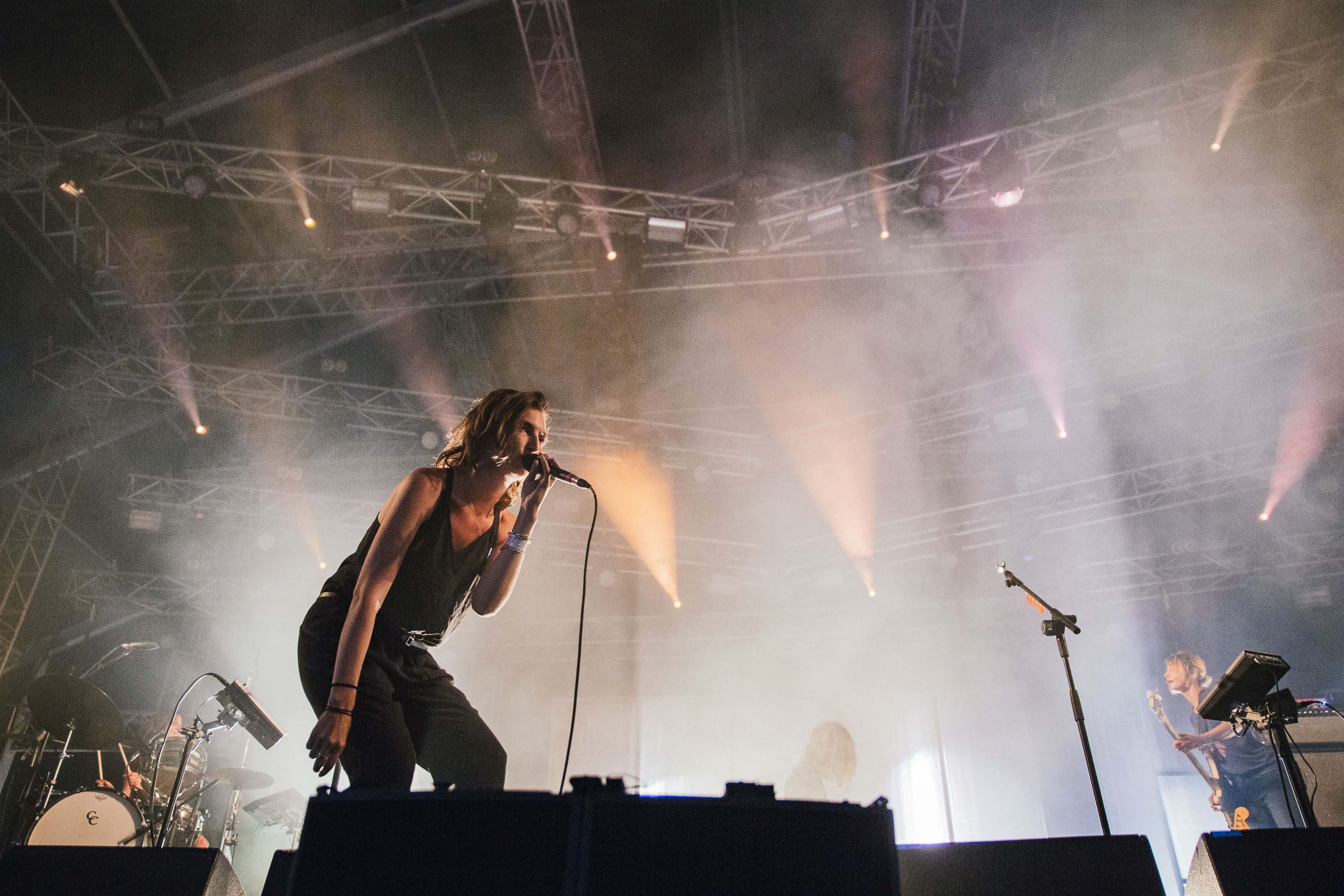 Currently celebrating 15 years together, The Kills don't have anything left to prove. But just because Jamie Hince and Alison Mosshart have been around for a decade and a half doesn't mean they're taking things easy. Instead, they cram their career-spanning set full of bluesy, dirty riffs, switching it up between pounding, organic percussion and snapping electronic drum beats that keep things as fresh, alive and fierce as ever, even on some of the set's more hushed moments, such as with the contemplative 'Black Balloon'. Jamie and Alison themselves have never seemed so alive either. At this point the connection between them is well and truly cemented, and it shows. Alison knows exactly when Jamie is about to drop a crushing riff, throwing herself into frenzied head-bangs while also giving him equal time to shine. On the strength of this, another 15 years could well be on the cards. 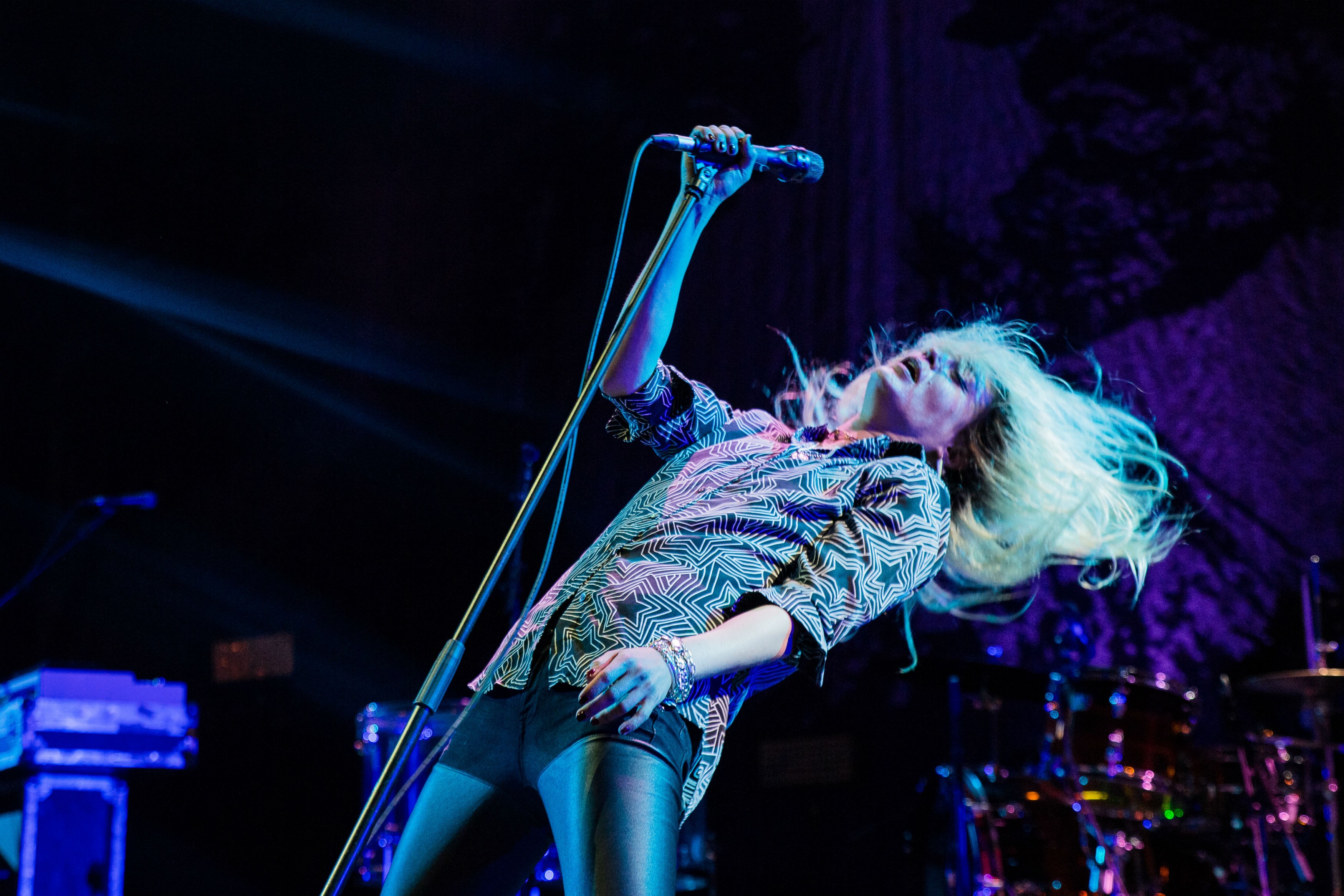 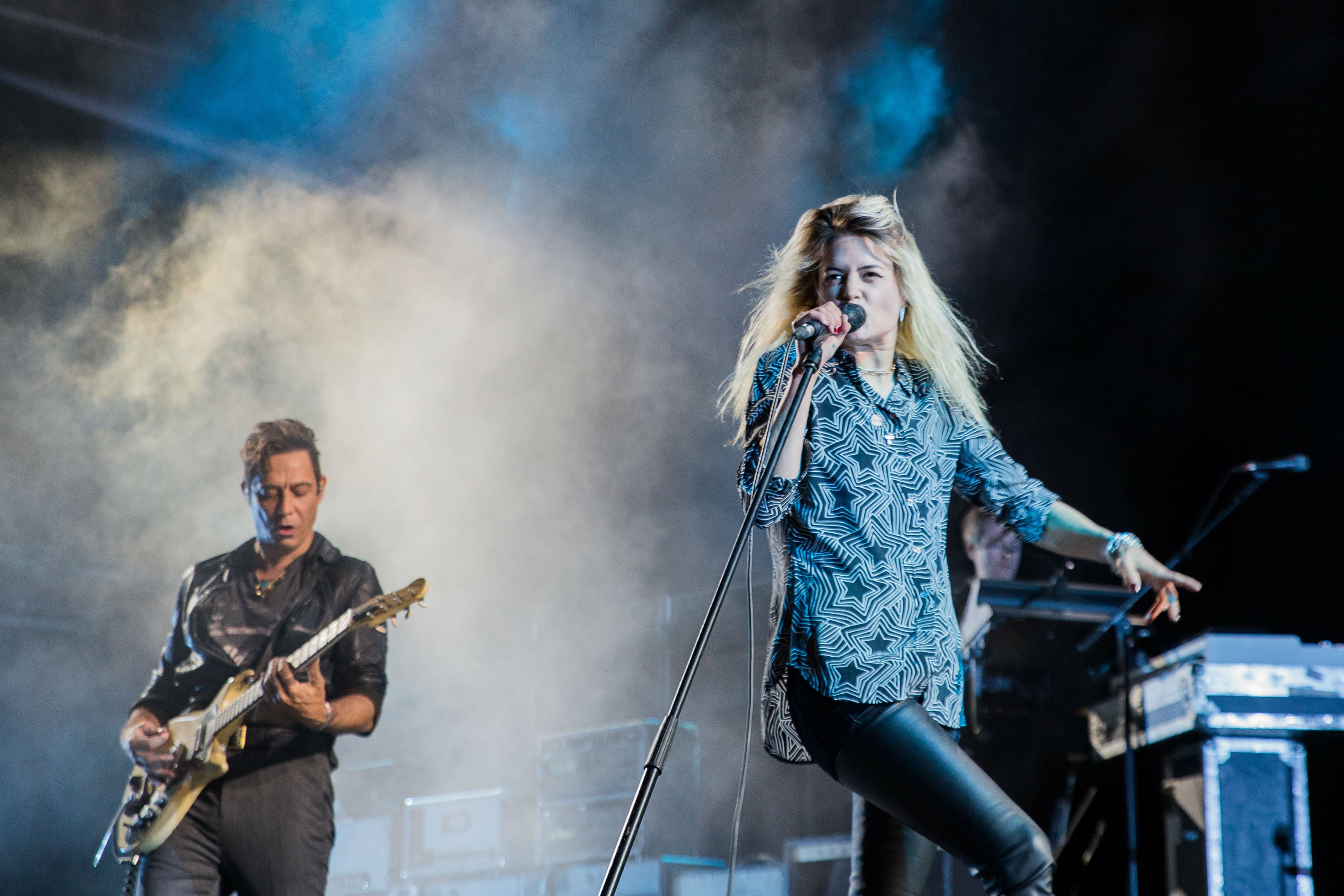 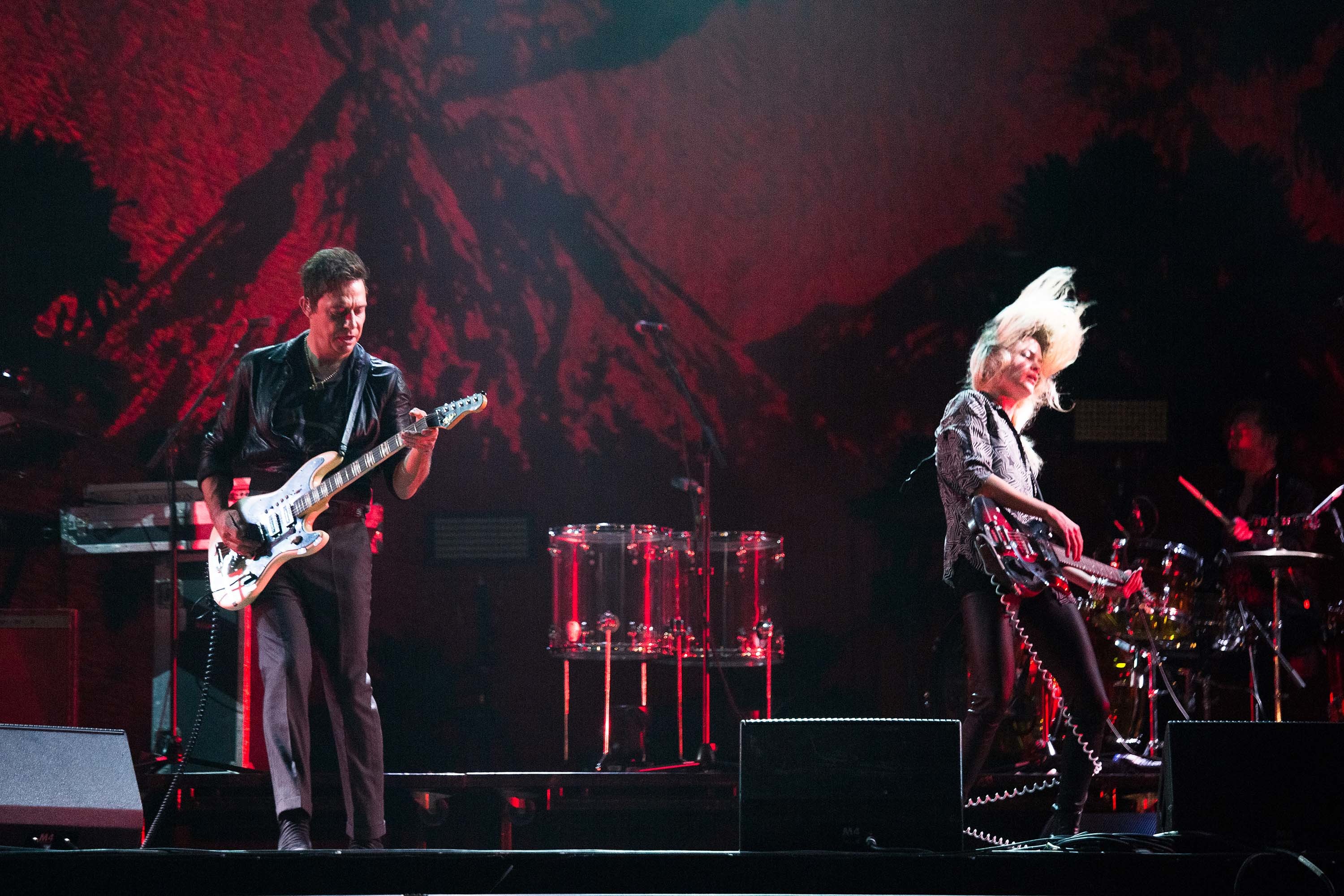 Back on the Heineken stage, Local Natives' dwindling crowd is the unfortunate result of being sandwiched between The Kills and Foo Fighters. That's a bit of a shame, because the Californians' indie-pop is a dose of sunshine as it threatens to rain, in no small part down to the neon-lit synths of their latest album 'Sunlit Youth'. There are other, slightly meditative moments from their more folk-infused earlier albums, but these are broken up by bursts of clashing drums and soaring harmonies. A second exodus occurs to the main stage, leaving only a hardcore group of fans to lap up the likes of 'Coins’, making it a treat for anyone who stayed.

But of course it's difficult to resist the pull of Foo Fighters, who draw the biggest crowd of the festival so far. When you play an opening stretch that includes 'Times Like These', 'All My Life' and 'Learn To Fly' though, it's little wonder why they have such magnetism. The audience don't need any encouragement from Dave Grohl to let loose, but he works them anyway, imploring them to sing and clap as much as humanly possible. That's something of a double-edged sword though, and it gets a little tiring when tracks are deliberately drawn out to almost impossibly great lengths just to ramp up the anticipation for an explosive final chorus.

Luckily, the highs are greater than the lows, especially as they start to reel off song after song without pausing for breath, electrifying the already hyped up masses even more. With Alison Mosshart joining the band for a brand new, slightly sludgy stomper from their upcoming LP ‘Concrete and Gold’, 'La Dee Da', they even show off a new, dynamic layer to their sound. Still, it’s the big-hitting singles like ‘Monkey Wrench’ that pack the greatest punch. At one point, Dave even comments on how "I love how you sing along and shit". But really, when you've got as many memorable hits in your arsenal as the Foos, it's impossible not to song along with him. 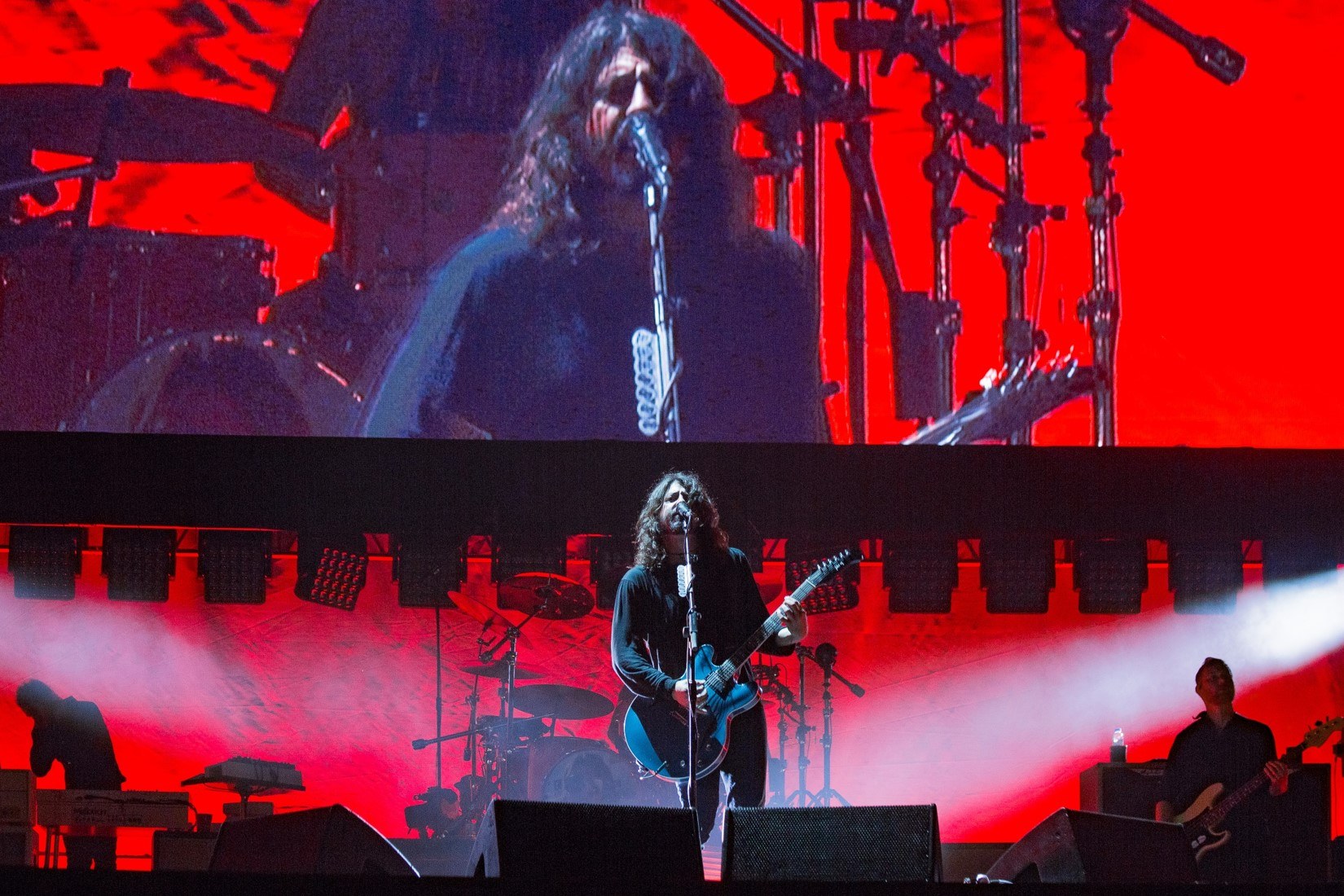 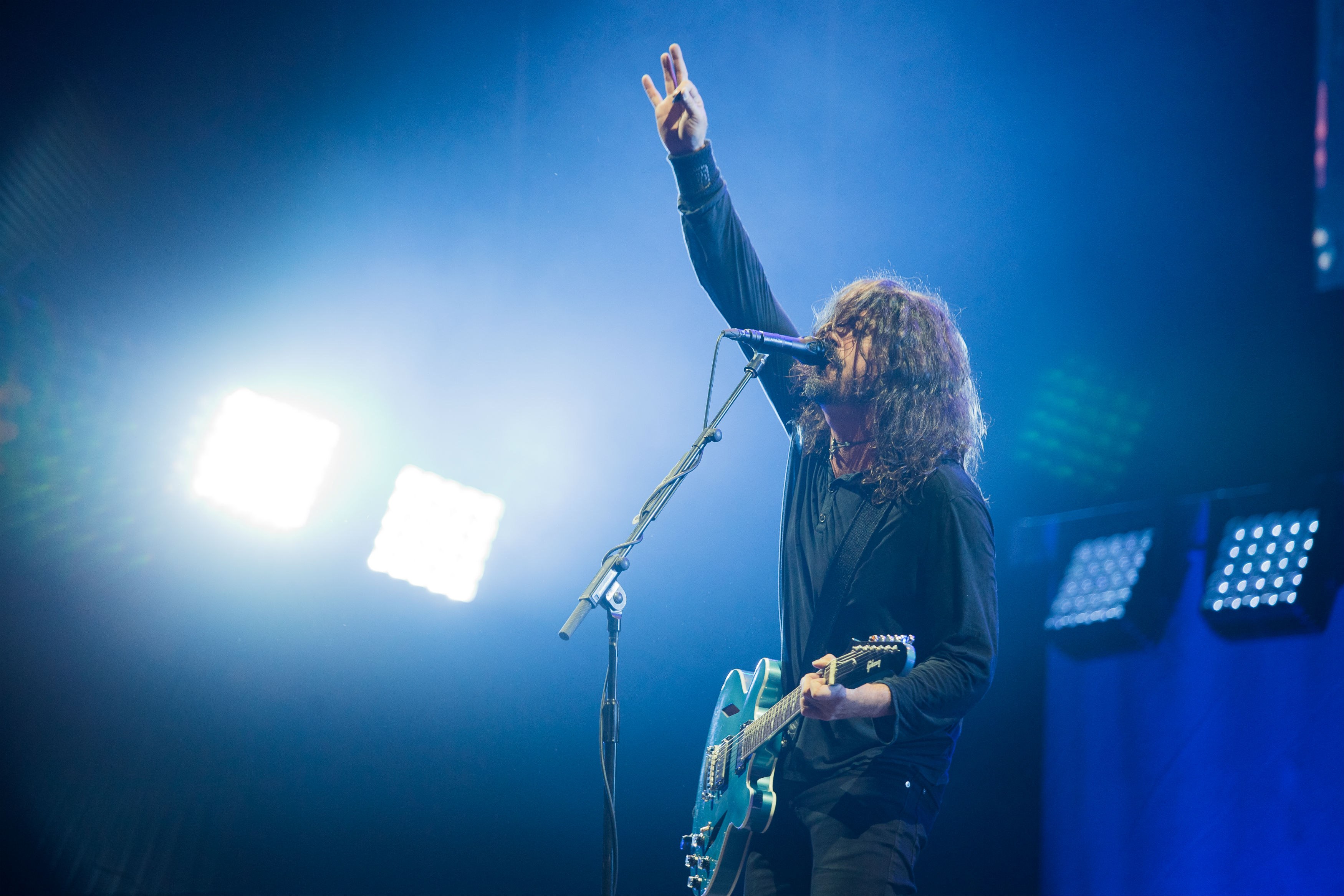 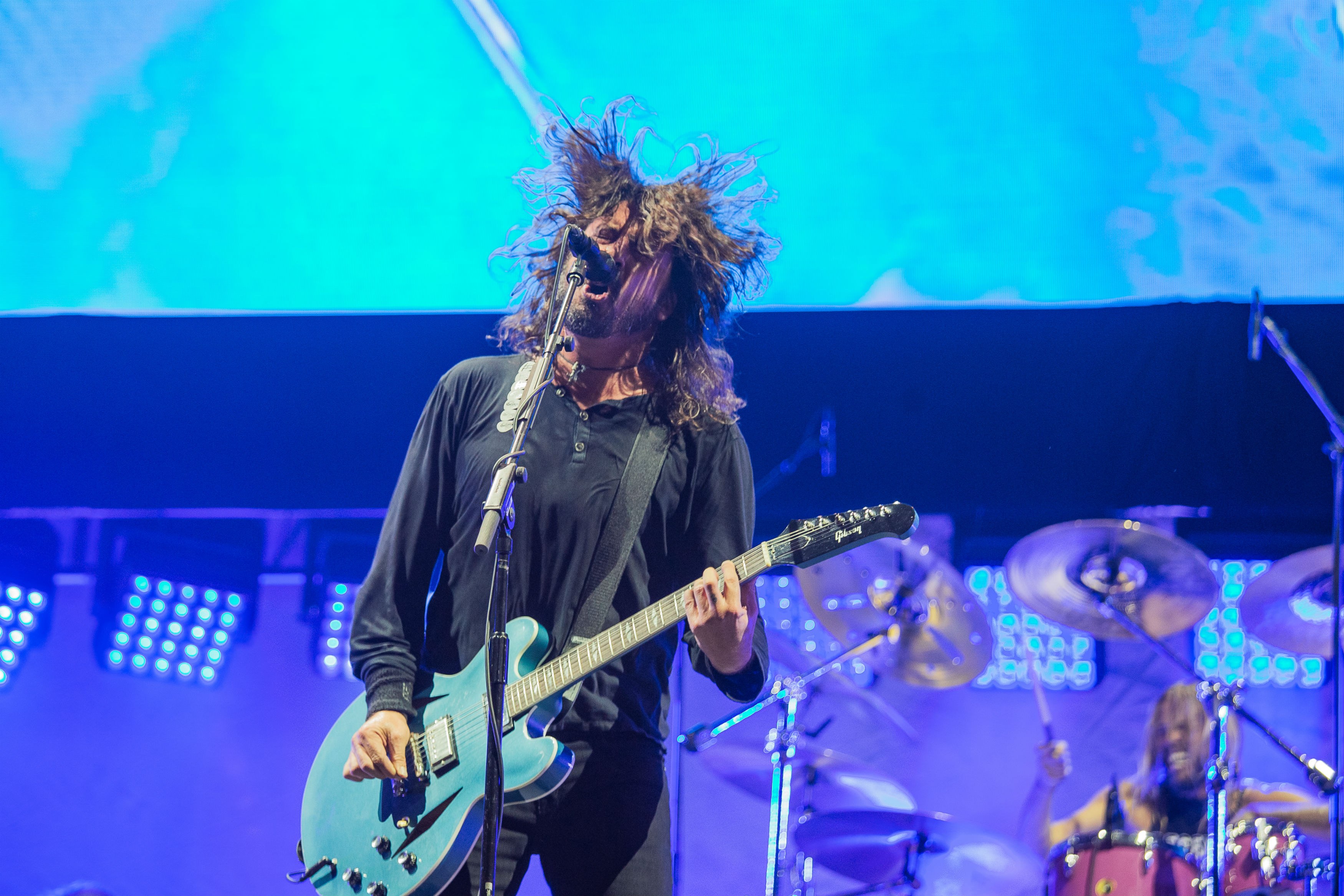 And to celebrate they’re sharing the video for unreleased demo track ‘Raise Me’.