In pop culture when we were growing up, a lot of the female icons in the ‘90s were witches,” muses Alice Go – Dream Wife’s infectiously enthusiastic guitarist, blessed with a howling cackle of a laugh capable of erupting at any moment. “Buffy, The Craft, Sabrina, Charmed… Women who didn’t fit into the box at that time were typecast as witches, and there’s definitely something that speaks to us about that. It’s a powerful thing that should be embraced, I think.”

“When a man flies, he’s called Superman, but when a woman flies she’s called a witch,” notes singer Rakel Mjöll with a knowingly raised eyebrow, adorned today in a near-perfect approximation of Cher Horowitz’ yellow-tartan Clueless suit. The trio, completed by bassist Bella Podpadec – a quieter but no less intriguing presence, currently curled into the corner of a sofa – all nod and mutter murmurs of agreement.

See, in Dream Wife’s world, the magical and mystical are tangible presences. Whether in the sisterly bond that notably fizzes between the three - both on stage and in their mile-a-minute, finishing-each-others’-sentences conversations - or the nods to the power of the occult that pepper their visuals and general vibe, there’s something otherworldly about this lot. It’s not ‘ethereal’ or ‘fairy-like’ or any of the flimsy words usually put upon women, though. No, Dream Wife have concocted a powerful brew charged by strength and solidarity, gathering an ever-increasing congregation of self-proclaimed Bad Bitches along the way to help make real their vivid fantasies.

They’re a riot of giggling fun one moment, and passionately explaining their commitment to creating safe spaces for women the next. Their live shows take pastel-coloured imagery (their last London headline show was prom-themed) and fill it with hundreds of empowered fans screaming at the top of their lungs. They’re a wonderfully contrary force that defies labels, steadfastly revelling in being everything all at once. “It’s about flipping the switch,” grins Alice. “Taking these stereotypically feminine aesthetics, and then turning them around into something powerful and liberating. Being in control of your identity and your own destiny.” 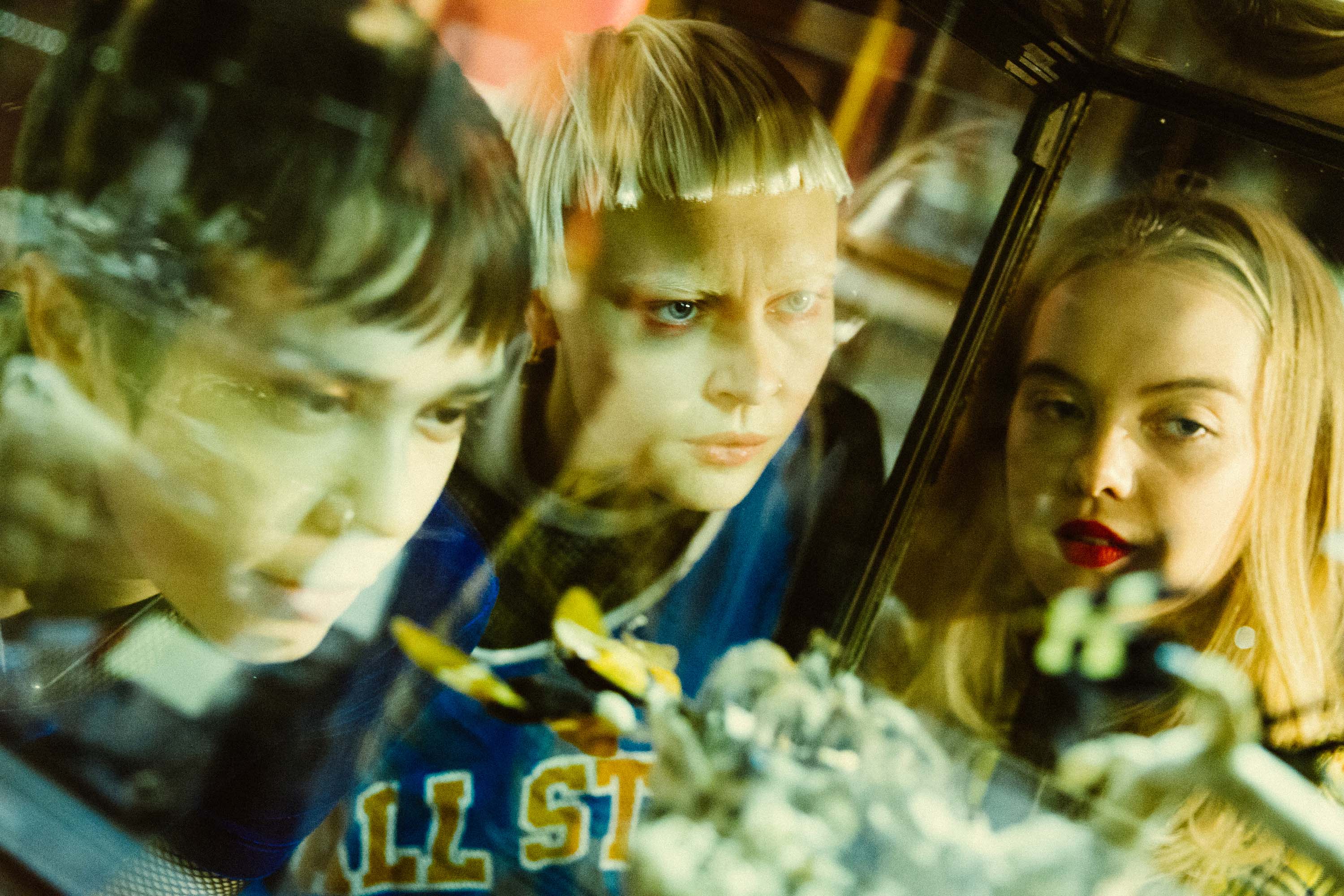 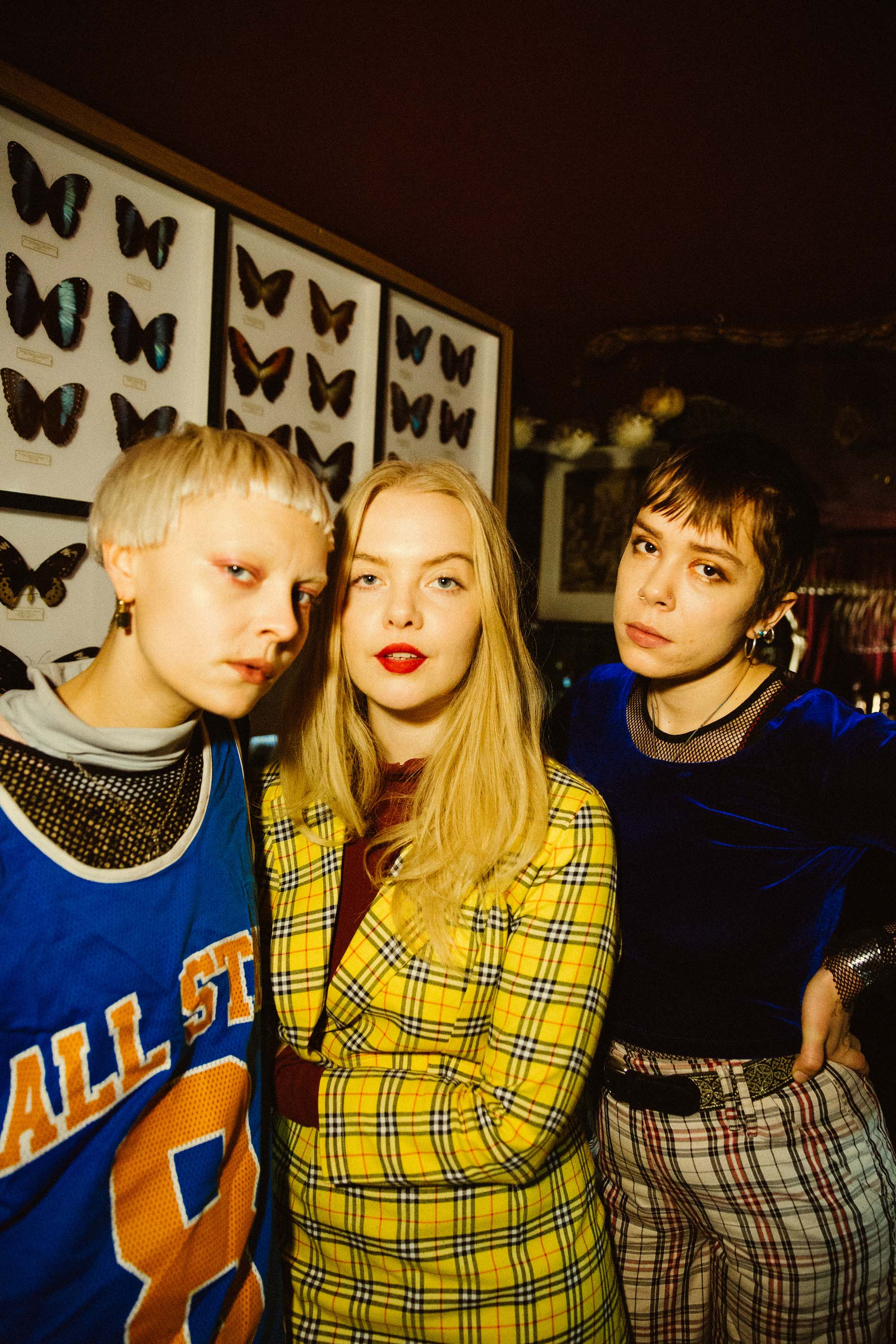 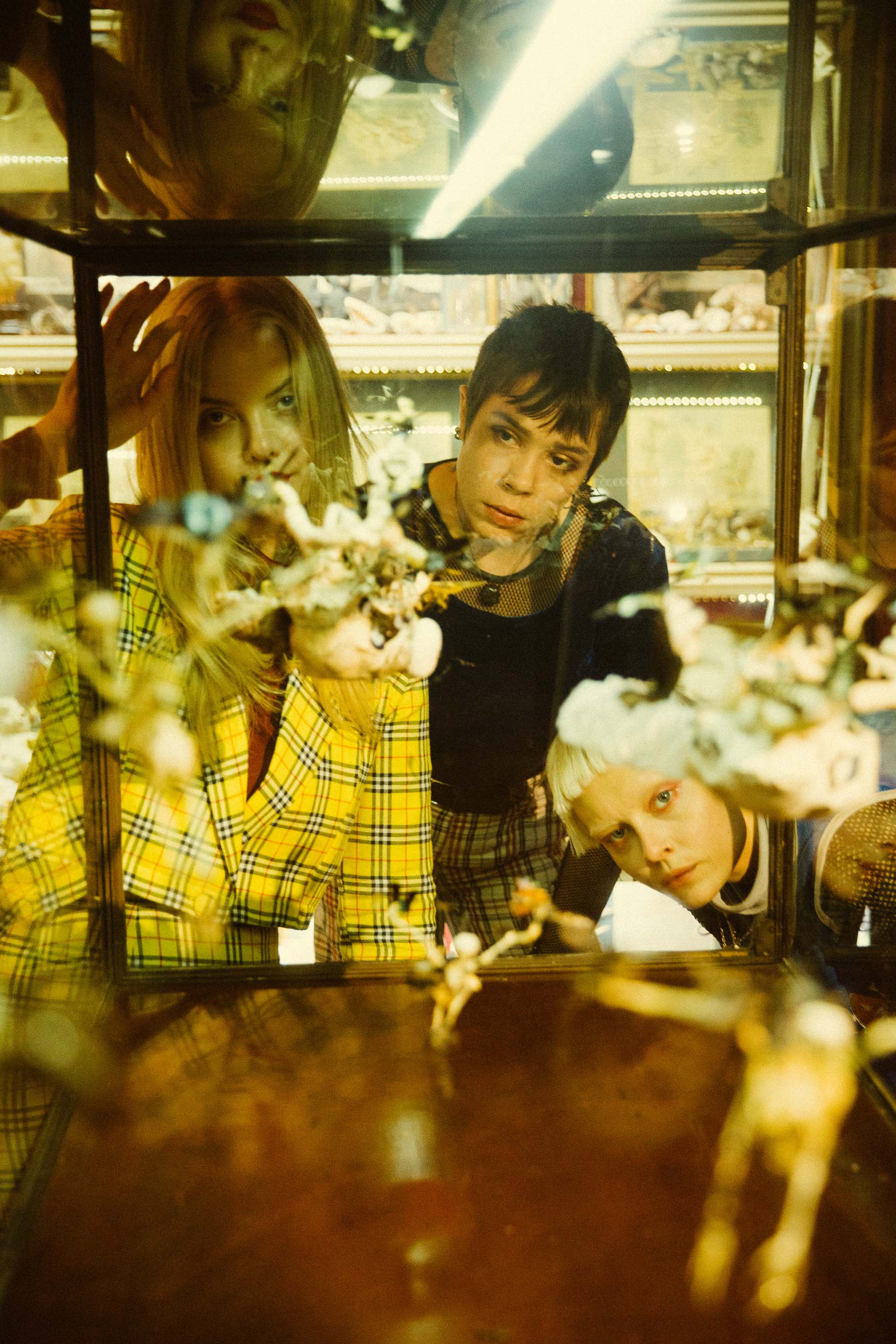 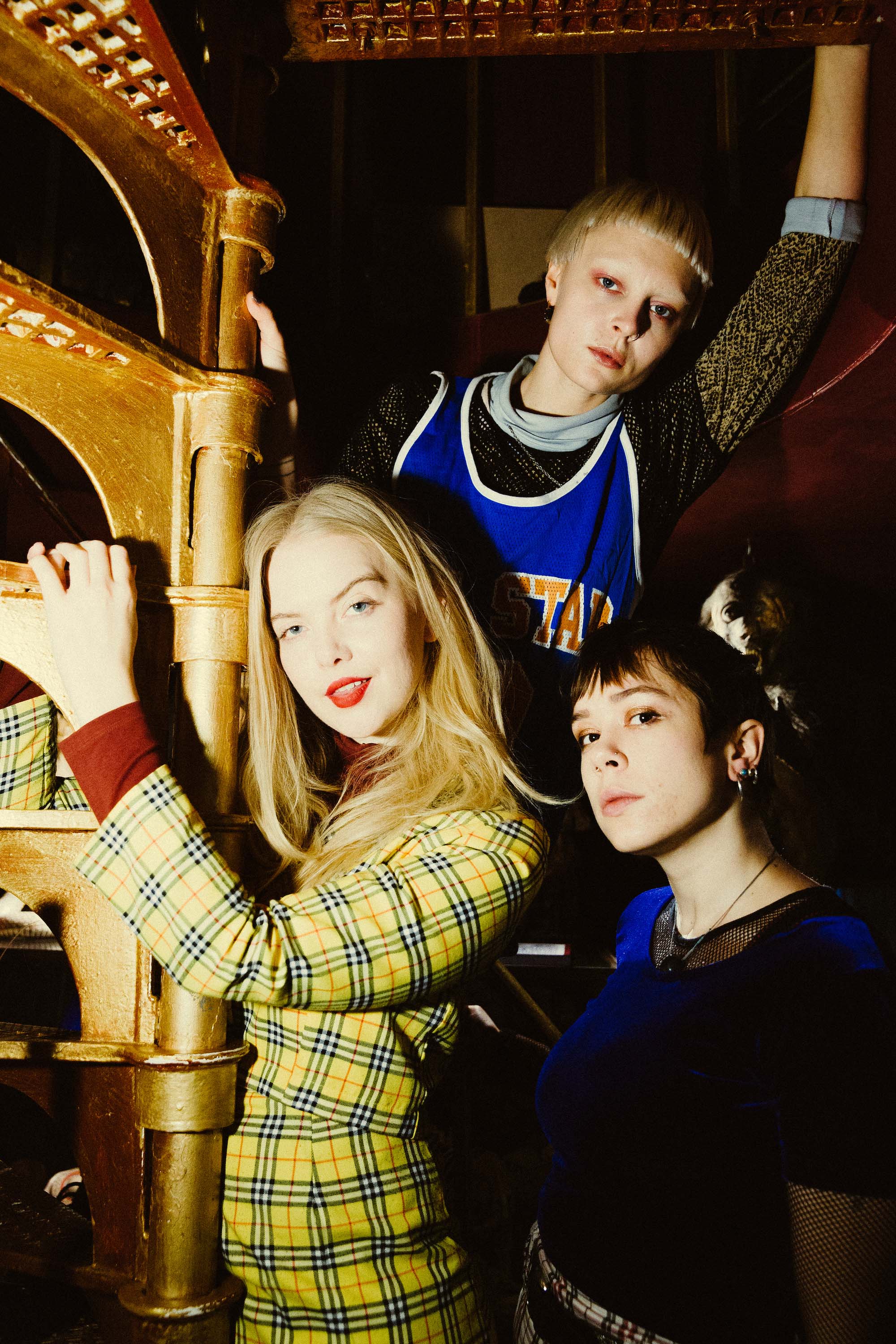 “It’s about flipping the switch, being in control of your own identity and destiny.”

Today, drinking black coffee in the low-lit surrounds of Victor Wynd’s Museum of Curiosities – a treasure trove of the weird and wonderful, tucked away in a corner of Hackney – the trio’s immediate destiny seems to be unfolding just fine. Here to wax lyrical on the self-titled debut album they began recording at West London’s Eastcote Studios on this exact day last year, they’re now sitting on a record that encapsulates the giddy dichotomy of feral squalls and sugary pop hooks that have become their trademark. It wasn’t, of course, always meant to be this way though. Now cemented as one of this generation’s best band origin stories, Dream Wife started life as an art project conceived solely to wing them an excuse to go abroad.

“Me and Bella had the idea of making Dream Wife because we wanted to go to Canada. And we thought, we don’t wanna travel without a purpose, so what if we made a band and toured?” explains Rakel, completely seriously. “I had a [university] crit the next day and I had no ideas for what I was going to do for my project, so I thought what if forming a band with the sole purpose of going to tour Canada as an A to B plan [was the project]? The piece was called ‘Dream Wife Dream Of Canada’. We didn’t have a clue what we were doing and it was meant to be finished when we came back.”

Of course, that particular deadline never quite came to pass. Having spent a month on Canadian Megabuses, successfully playing a string of DIY shows organised by their friends, the trio returned with a taste for musical life. “We thought we should try and play a show in Brighton or London. So we wrote a few more songs, and played a gig,” continues Rakel. “We never put any expectations on ourselves as a band, but we could never stop either,” picks up Bella. Almost immediately after their first London show at Shoreditch’s Old Blue Last, the trio found themselves in a string of meetings with hungry industry types, already snapping at their heels. Suddenly, ‘Dream Wife Dream Of Canada’ had become just Dream Wife, and the group had crossed over into the music world, for real.

But while the trio (augmented live by drummer Alex Pavely) may be a fully-professional musical machine these days, it’s their left-of-centre art school approach that’s made them such a unique proposition along the way. Whether decorating the stage with a glittery silver “space beach” theme for their debut London headline show (ever seen a crowdsurfing palm tree? They have...) or filming the video for the screaming sass of Spice Girls-referencing standout ‘F.U.U’ in the mosh pit at their fully costumed Halloween gig last year, Dream Wife always come at everything with an ambitious vision. “The London shows always just become a wild party because all of your friends are there, so why not throw a couple of tombstones in?” shrugs Rakel, by means of explanation. Life advice we can all follow, if ever there was some.

“The shows always become a wild party, so why not throw a couple of tombstones in there?”

More than just creating an audio-visual world to dive into, though, Dream Wife have also spent time nurturing a community at the heart of it. A place of inclusion and freedom that’s a kind of real life magic. “It originated as a photo project with our friend, photographer Meg Lavender,” explains Bella. “She came with us on the [Hello 2017] DIY Tour; she was going to take photos of us, but ended up mainly taking photos of the crowd.”

“She took this idea, and started shooting all the interesting people that come to our shows. She’d ask them about being a bad bitch, and we’d put these portraits online as the Bad Bitch Club,” continues Rakel. “There’s a moment in the show where I call out the bad bitches and ask them to come forwards to the front and take their space. They make the craziest moshpits and stage invade and have this time together. It’s all about believing in yourself and it’s really powerful.”

Alongside organisations such as Girls Against – a project aimed at creating safe spaces at gigs for women – Dream Wife are one of an increasing group of young bands rallying to make these positive steps. If the last 12 months have been particularly dark in certain corners of the music world, then a generation of bands being vocal and demonstrative in their determination to turn things on their head seems vital. “It’s not a thing I thought about when we first started playing shows, but now we’re playing to a younger crowd. How was it being 14, going to a show? Most of the time it was quite difficult and there were incidents that happened that you took for granted,” explains Rakel. “Now there are girls coming to my show and I never want them to experience anything like that or to think that they have to deal with it and that’s the way it is.” “It feels like it’s our duty to have these conversations,” nods Alice. “Every single band has to step up.”

Dealing with delicate issues surrounding sexual assault and victim blaming, and centred around the righteous motif “I am not my body / I am somebody”, 2017 single ‘Somebody’ was always going to be one of the band’s most meaningful. “When I wrote it, I was very timid about releasing it. It’s so personal because it’s about myself and my friends, and pretty much everyone I know as a female, which sucks,” admits Rakel. But when the #metoo movement started to gain such immediate momentum, with thousands of women taking to social media to open up about their own experiences of harassment, the song began to take on a new prescience. 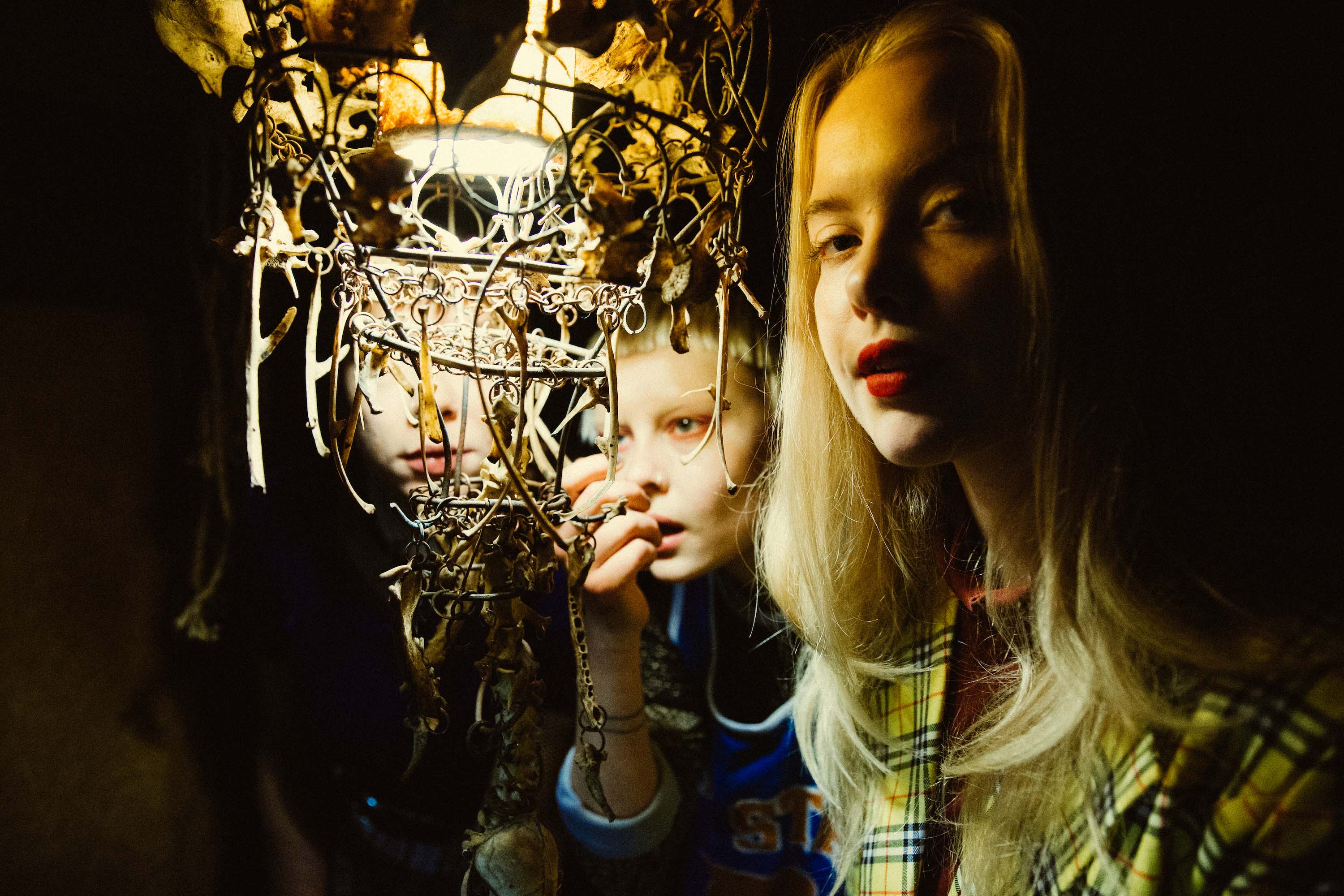 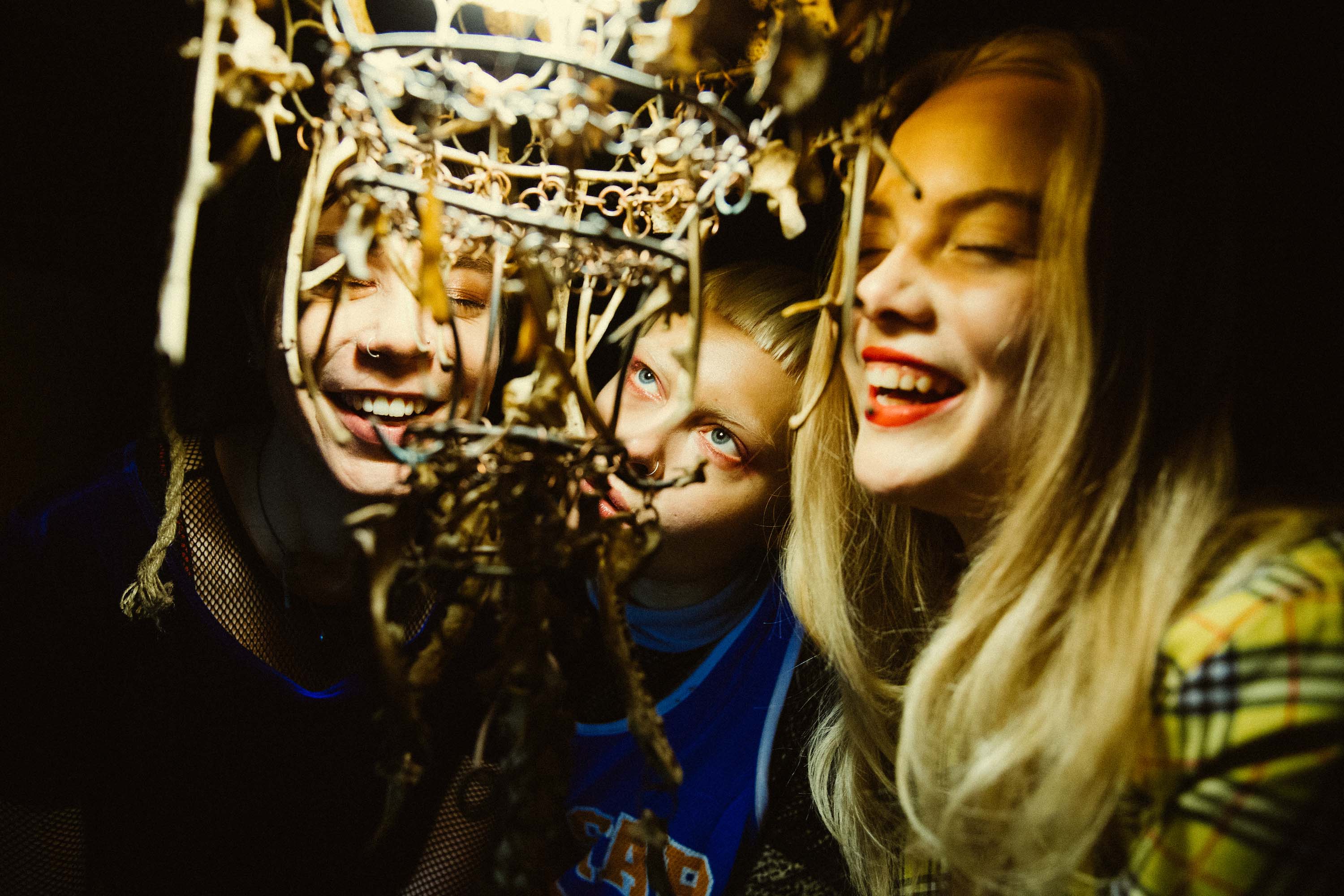 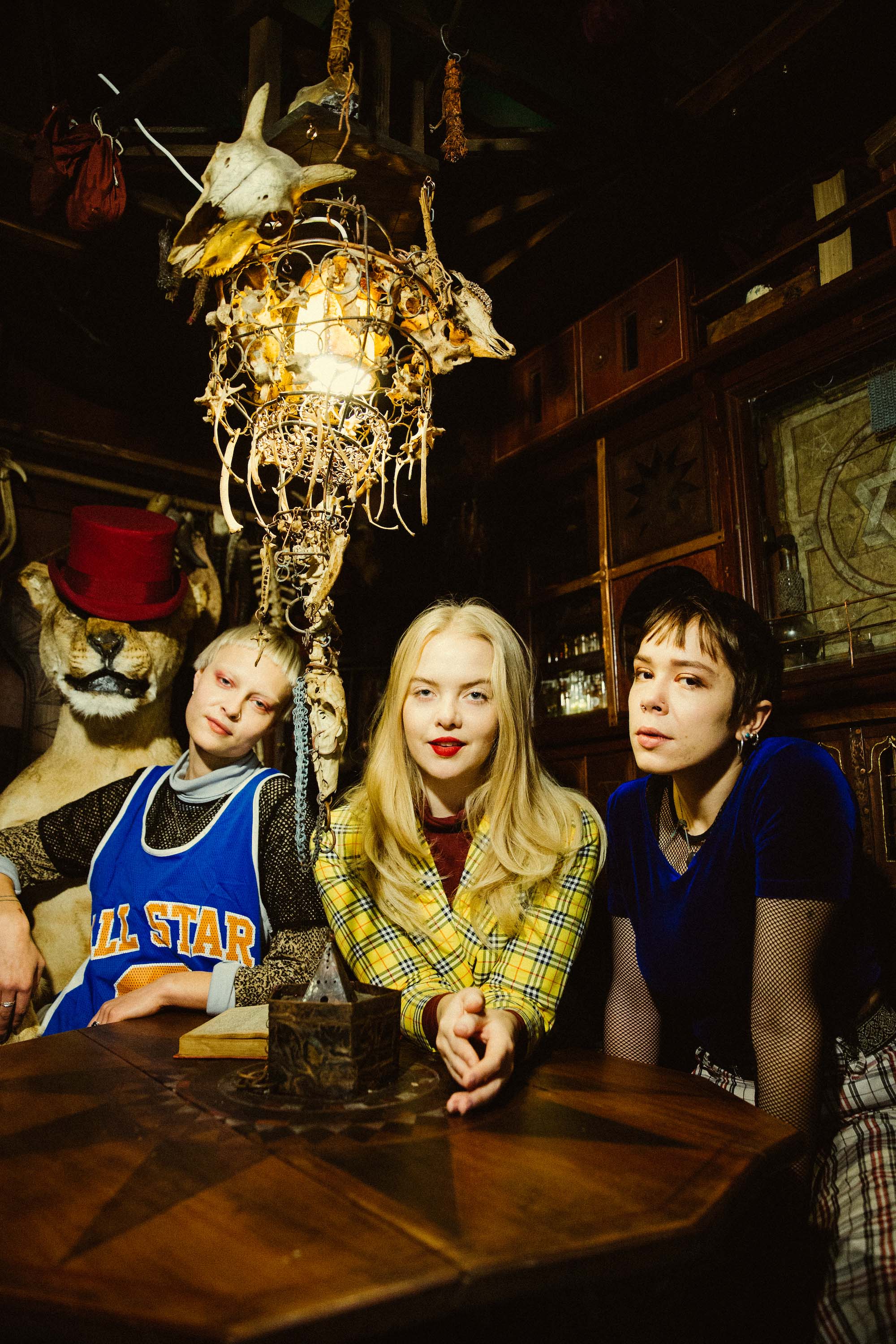 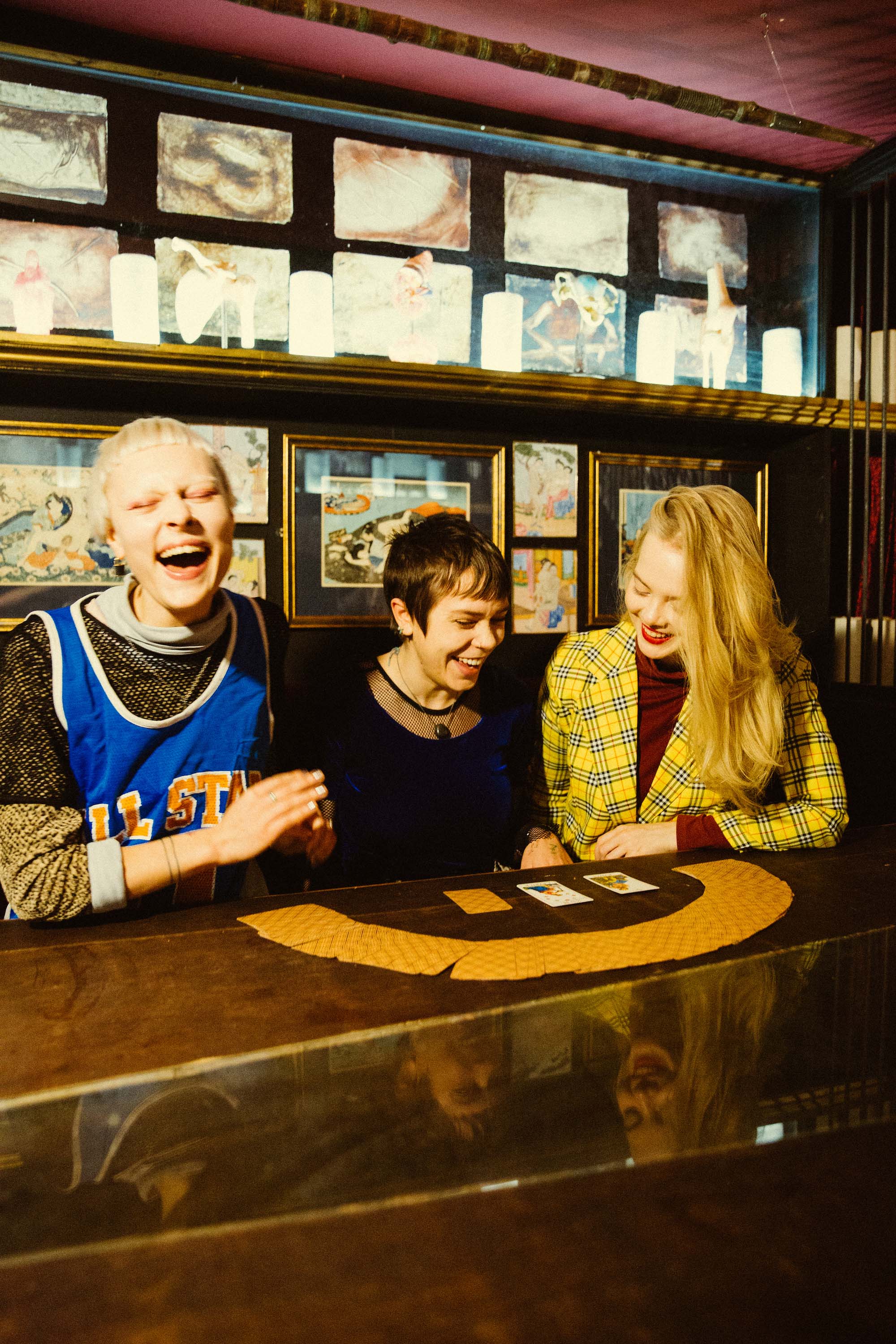 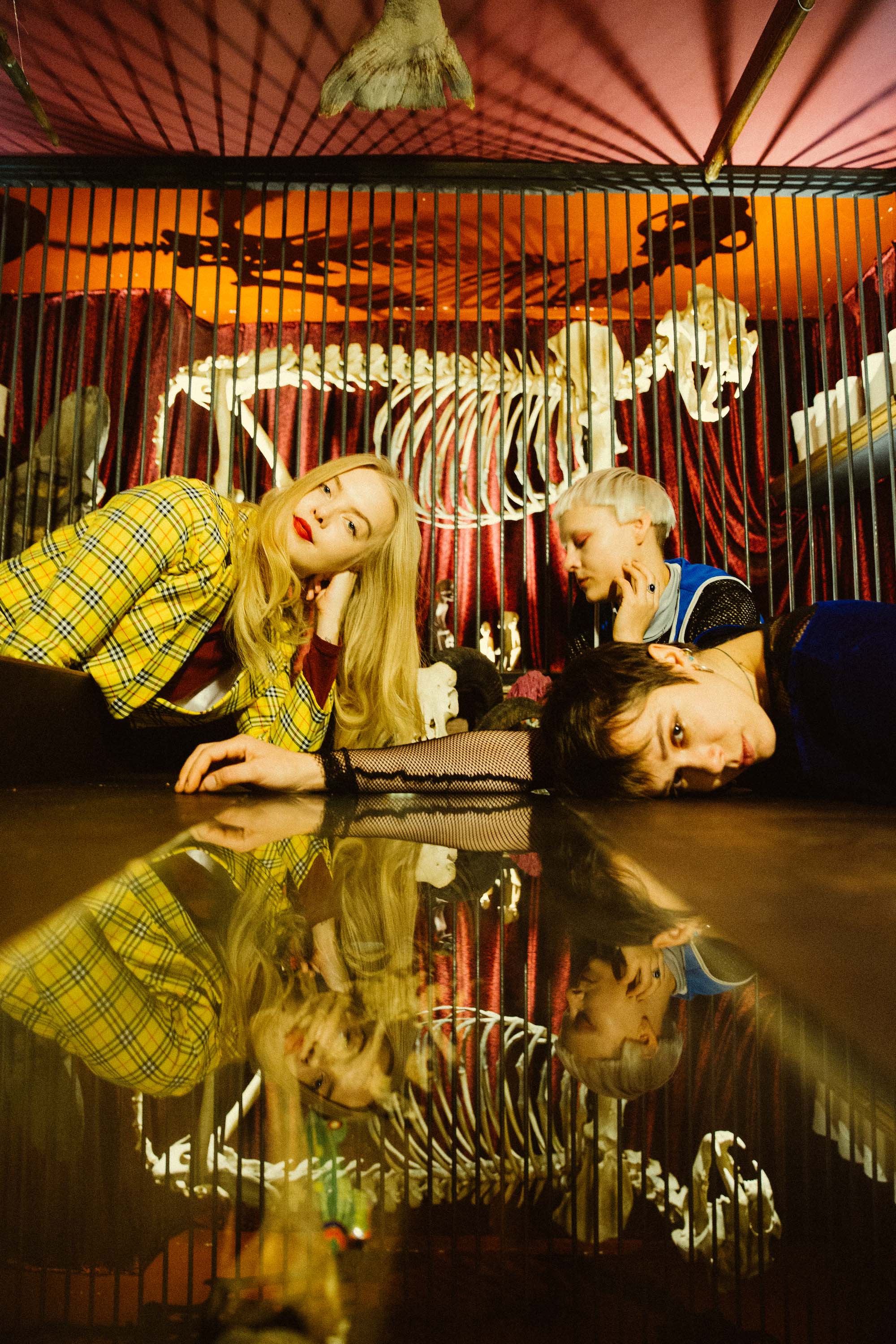 “We can be sexy. We can be vulnerable, but also empowered.”

“On our last tour of the UK, it was during the time that #metoo was happening. ‘Somebody’ had come out and people were just screaming it. “It was powerful, sharing that moment with all those women,” nods Bella. “When a song you release has so much impact on someone that they tattoo it on their body, that’s because they relate it to strength,” the singer picks up. “It’s about finding your inner strength; a terrible thing that’s happened to you should not define who you are and society should not define who you are either.”

Yet, if there’s an undeniably serious undercurrent to many of the ideas that ‘Dream Wife’ as a record wrangles with, then there’s an equally important emphasis on sheer, danceable, balls-to-the-wall fun. Bookended by the playful pashing of ‘Let’s Make Out’ and the aforementioned jagged belter of ‘F.U.U’ – the record’s two most full-on tracks by far – the filling of this particular album sandwich takes in pure pop hooks, angular ‘80s-isms, no-nonsense riffs and more. “It’s embracing the pop sensibility of it all because ultimately they’re pop songs and we love that, but it’s about flipping the script on pop music,” says Alice. There’s an audible lightbulb moment. “It’s chaos pop! Can we coin this new genre?! Bowie was chaos pop. Madonna was chaos pop. We could pull it off maybe...”

As chatter descends into the intricacies of what does and doesn’t constitute their newfound niche (“It’s punk, but there’s so much funk in punk...”), one phrase from ‘Act My Age’ - “Do I amuse you? Do I confuse you?” - comes up. It’s an eyeball-rolling kiss off that seems to lie at the heart of Dream Wife’s particularly untameable blend. Feminine but aggressive, fashion but DIY, pop but chaos, they’re the kind of progressive group that the old guard don’t understand and the youth are lapping up. “That [line is] basically the story of our lives,” mutters Rakel.

“When ‘FUU’ comes on, people’s faces freeze. They’re smiling but they’re afraid at the same time.” She continues: “We’re women; we’re not just one mould. We’re not just ‘the dream wife’, which doesn’t exist. We can be angry and enjoy it. We can be sexy. We can be vulnerable, but also empowered. We’ve tried to show all those faces within this album.” “It’s complex... like a woman,” deadpans Alice, as the trio descend into hoots of laughter.

Righteously fierce and irrepressibly fun in equal measure, Dream Wife revel in their own idiosyncrasies, creating a thoroughly modern kind of magic at every turn. Now, with a badass debut under their belts, the heady allure of their particular spell is getting stronger with every move. And for their next trick? Keep an eye out for ‘Complex Like A Woman’ in fragrance departments from 2019...

'Dream Wife' is out now via Lucky Number.