It’s the end of another week, and what a week it’s been for new music! The last seven days have seen the unexpected return of some legends, new tracks from buzzy newcomers and quietly confident next steps from bands a decade in.

From the comebacks of Gerard Way and The Good, The Bad & The Queen to new ones from Westerman and Hatchie, it’s a classic edition.

Back in 2014, former My Chemical Romance frontman Gerard Way emerged from his tenure as emo’s chief pin-up to deliver a debut solo record that cribbed from Britpop’s finest. A touch of Suede glam here, a dash of Supergrass melodic fizz there, ‘Hesitant Alien’ was Gerard digging into his record collection and coming out painted in the glammiest shades of the Union Jack.

Now, just in time for Halloween, the singer is back with an unexpected new single – his first since then – and it picks up the hyper-melodic, hook-laden mantle of that record and douses it in a warm fuzzy crackle. An irrepressibly head-shaking bop, ‘Baby You’re A Haunted House’ is like Weezer covering a classic ’60s early Beatles romantic romp – all performed in its accompanying video by a group of besuited skeletons. Which, frankly, is everything we’d want from Way and more. (Lisa Wright)

The Good, The Bad & The Queen - Merrie Land

Eleven years on from their self-titled debut, there seems no more poignant a time than now for The Good, The Bad and The Queen – the ‘supergroup’ comprised of Damon Albarn, The Clash’s Paul Simonon, Simon Tong of The Verve and acclaimed drummer Tony Allen – to make their return. Then, the group penned a paean to London; now, their sights are wider, soundtracking with their own peculiar melancholy a country teetering on the edge of overwhelming change.

‘Merrie Land’ – the title track from their forthcoming album – is the strange, sad introduction to this. Set to fairground-esque, plinking backing, Damon spins a stream-of-consciousness tale of often abstract, disconnected thoughts. But within the observations are prudent nuggets, of people “disconnected and raised up in mansions” and of “two hundred plastic bags in a whale’s stomach”. Beneath the purposefully feather-lite sonic exterior, The Good, The Bad and The Queen are soundtracking a real-life horrorshow. (Lisa Wright)

Westerman makes music to escape into, blissful lullabies intended to calm and soothe, taking time and space away from the hustle and bustle. It was shown impeccably on most recent cut ‘Albatross’, of which we said: “the conviction and ease with which he escapes into these songs of bliss make it all the easier to join him there.”

New cut ‘Outside Sublime’, the second preview of upcoming EP ‘Ark’, is a little more direct in its message, but even stronger at offering a comforting hand on the shoulder.

“I wanted to write a note to a struggling friend” Westerman explains of the track. “I wanted to be really direct with this, and for it to feel joyful and powerful in an unobtrusive sort of way.” His mission is executed perfectly - “do what you want, I’ll always be your champion,” he repeats calmly over a reverberating guitar line that’s joined at the track’s conclusion by a triumphant, flailing guitar solo, and it’s a track delivered with enough gusto that it can serve as an anthem of self-acceptance to any who stumble upon it. (Will Richards)

The ambition and scale of her sound isn’t dialled down one jot on new track ‘Adored’ - before any vocals even come in, the track whizzes its way through an instrumental that sounds like a sprawling outro to a shoegaze song, a woozy atmosphere immediately present. When vocals do come, they add another layer of dreamy sheen, and another entry in Hatchie’s already storied catalogue of tracks for late night dreaming. (Will Richards)

“We stumbled into the medieval-fortressed island town of Gallipoli one night and followed a brass band procession fronted by priests carrying a statue of the town’s saint through the winding narrow streets behind what seemed like the entire town,” Beirut mastermind Zach Condon says of his band’s new song ‘Gallipoli’, taken from an upcoming LP of the same day. “The next day I wrote the song entirely in one sitting, pausing only to eat.”

In line with these origins, ‘Gallipoli’ sounds like a tipsy walk through ancient streets, embracing the unknown and endless summer nights. A return to the horn-flecked, regal origins of the band on debut album ‘The Flying Club Cup’ it sees Zach’s baritone voice soar with more confidence than ever, and Beirut truly find their groove once again. (Will Richards) 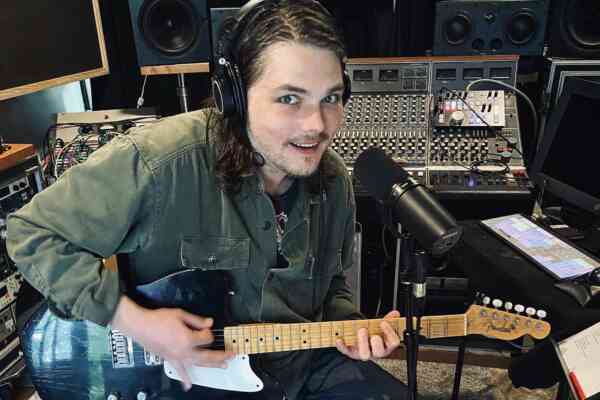