Happyness are set to release new album ‘Floatr’ in May, today sharing another taster in the form of ‘Seeing Eye Dog’ (scroll down to listen). It’s the now-duo’s first new material in three years, but also their first since drummer Ash Kenazi began incorporating his drag into the band.

We spoke to Ash and singer Jonny Allan about how the change has helped them evolve as a band and as people, and how Happyness are trying to smash down walls to help diversify indie as a whole.

You took a load of pictures for us from your day performing at Ru Paul’s Dragcon recently – how was that?

Ash: I had to get up insanely early and get into my best drag, and there’s a different pressure because it’s Dragcon, like “I’ve got to show up and turn out in a way that I might not have to at a gig”. It was tough in many ways because we were trying to stick to our guns but also please a crowd who are more used to queens coming out and doing a death drop. You’re at a drag convention but my drag is very unconventional.

Jonny: But you were looking stunning! You were Top 10, for sure!

A: There are some people on the team who are really keen to make sure that drag doesn’t just become the Ru Paul version of drag, so we felt like it was amazing to put across our version of drag. It’s no different to the music industry and Ru Paul is the equivalent of a major label. It was like when we used to do support shows for a band that didn’t necessarily fit, but some of our biggest fans came out of those shows.

How have you found it presenting this new incarnation of the band?

J: We didn’t really know how it was gonna go down, but you can’t guess what people want or will react to. It never works. We just had to do whatever makes sense for us and lets us both be our best people.

A: The people that questioned it were the people who worked in the industry. And I think that’s one of the issue within the industry that I especially felt before I came out, that once you’re a band and you have an image, if that hits the spot then people are very keen to maintain that image and continue to project that image, which doesn’t allow artists to develop. I witnessed many bands suffer from being held in a certain image or a certain format.

Do you think that’s even more the case in your slacker-indie genre where there historically hasn’t been a lot of diversity?

J: Weirdly, in an area that maybe had a real version of cool, I think it’s quite incredible how as soon as one person does something incredibly brave, a whole load of people start to admit that they weren’t necessarily feeling it. After the first show we played in Bristol, the amount of people that were queuing up to talk to Ash was amazing; I’ve never seen anyone break that much of the ice in one go. There are so many people in that area who are quite nervy as well, a lot of their coolness is to do with being quite shy, so having someone smash through the ice makes people chill out a whole lot.

A: The people that have an issue are the ones who have an issue in themselves. I’ll admit that five years ago I would have looked at [me then] and said, no you can’t do that. I couldn’t accept that I was gay, so how could I accept that? But you can feel the friendliness that does exist within the music community or the indie community because I haven’t had anyone commenting anything bad. 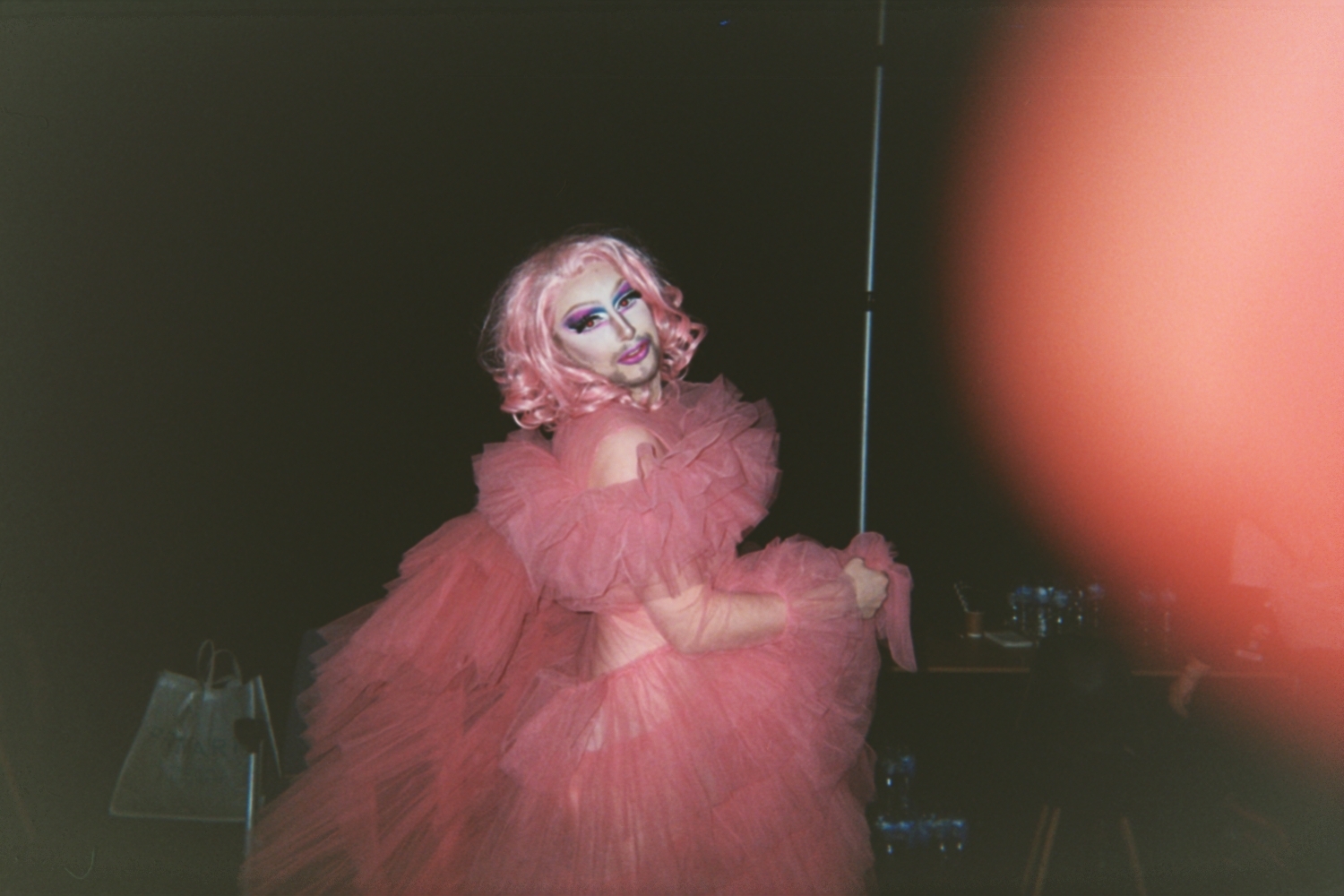 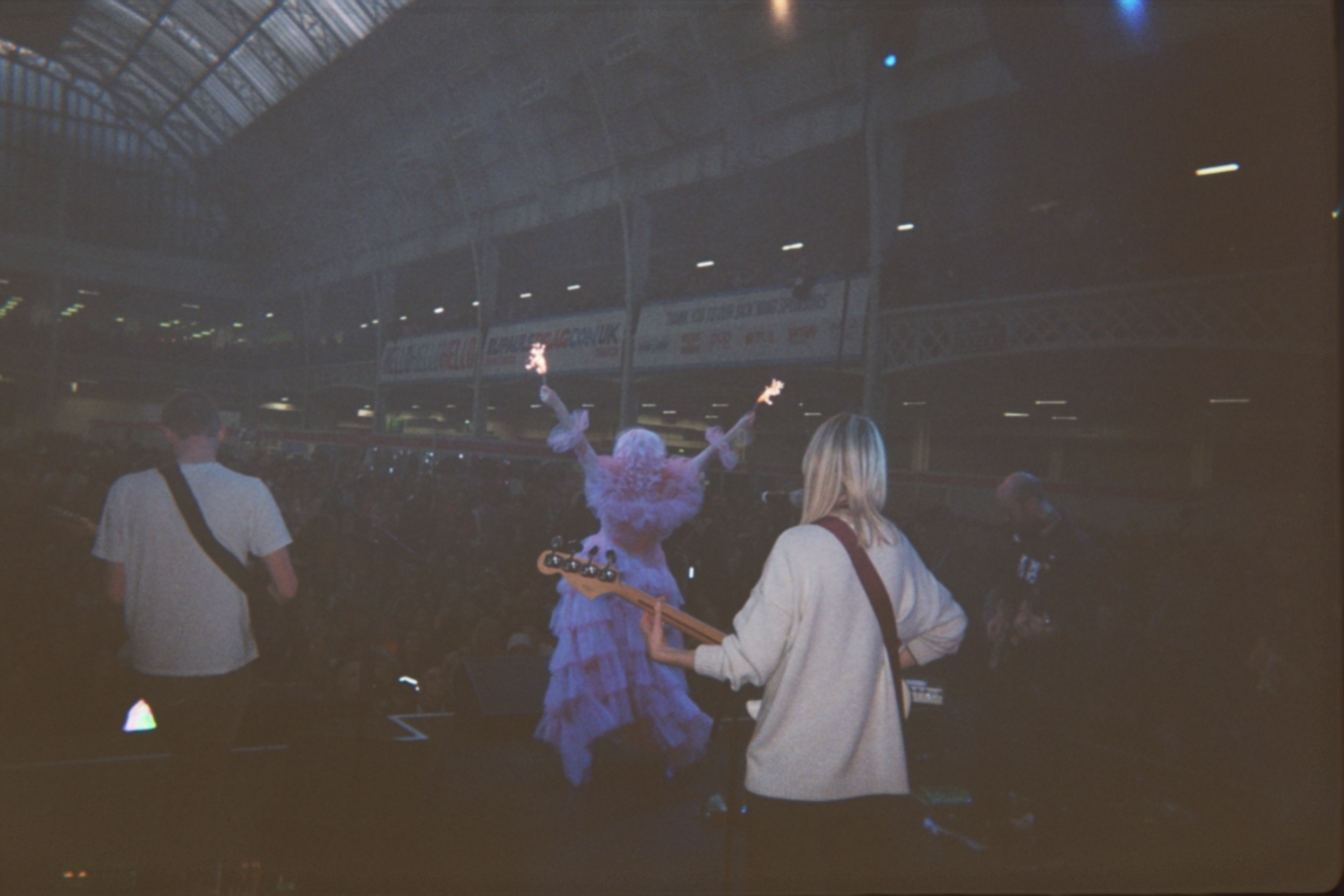 “I’m excited about being a health and safety nightmare and being as disruptive as possible in a positive way because art and queerness are meant to be transgressive.”

When and what prompted you to first start doing drag?

A: The first step was picking up a pair of heels and putting them on, and then at End of the Road 2017 a really good friend of mine was DJing and let me dance on the stage in drag. That was the first time I did it properly. But it's interesting, because doing drag wan't a new thing for me; I'd been doing drag my whole life, a) as a performer and b) because I'd had to create characters or personas for myself to actively avoid thinking about who I was. Being on stage has always been a version of drag for me because it was a mix of being able to avoid myself and express myself at the same time.

Being able to perform onstage was really important in getting out that tension when everything in my real life was a real struggle. If I ever decided to be an actor, it's like, honey, I acted straight for 18 years and that is really difficult.

Has embracing that side of you as a performer affected you in other ways?

A: It's affected me in every sphere. Internally, everything's shifted. I didn't know it was possible to be this happy previously, and if there's one thing that I can help people to recognise it's that it's not only on the sexuality level. Ru Paul's Drag Race is such an important programme because I think some people don't realise that you're allowed to have that much joy and transgression and fun in your life.

J: It's really inspiring and I think everybody, no matter their sexuality or gender, can take so much from it. It has literally changed the whole way I deal with the world. I've always been a very shy human being, but seeing people overcome things that are so much bigger than I've ever had to overcome makes you think, why the hell are you worrying?

A: It's so important that you [Jonny] are a part of this, because there's so much that can be learnt from how to support people of queer existence on a personal level and with their experience.

J: I think a lot of straight men need to start having role models that aren't other straight men. It's an inclusive thing. No-one loses out.

And now you've announced a new album! What are you most excited about, going into 'Floatr'?

A: I'm excited for fire, I'm going to do some fire stuff on stage. I'm excited about being a health and safety nightmare and being as disruptive as possible in a positive way because art and queerness are meant to be transgressive.

'Floatr' is released 1 May via Infinit Suds.